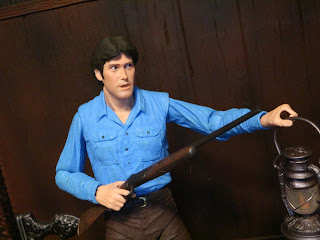 I've probably mentioned it before but I was introduced to Ash through ToyFare magazine. They regularly included references to Ash and the Evil Dead films, particularly to Army of Darkness, and had lots of appearances and quotes from Bruce Campbell. ToyFare magazine first came out in 1996 when I was in 7th grade and it was a huge part of my formative years. If something was mentioned by ToyFare I did my best to check it out. I was super curious about the Evil Dead films though I really hadn't seen many horror films at that point. I was thrilled that the summer after I finished 8th grade while staying with my grandmother I happened to find a VHS copy of Army of Darkness which belonged to one of my uncles. I was absolutely thrilled. It was everything I could have wanted in a movie and it's still one of my favorites to this day. As soon as I came back home that summer I convinced my dad that we should head to Blockbuster and check out the other films. We started with 1981's The Evil Dead, of course, and wow: I wasn't prepared for that. I mean, I was, but at the time I found it terrifying and shockingly bloody. Honestly, it still is. While the mixture of horror, comedy, and coolness of the future films is probably what makes them so endearing to me it's easy to forget just how crazy and horrific the first film is and how different the character of Ash Williams is in the film.
I've long collected Evil Dead figures ever since the first Movie Maniacs figure from McFarlane Toys and while we've had plenty of figures from Evil Dead 2: Dead by Dawn, Army of Darkness, and even Ash vs. Evil Dead, no one has released a figure of the original Ash Williams until now. NECA has a long history with the property and it's exciting that they've finally been able to secure the rights to the original appearance of Bruce Campbell's iconic character. We're just a few days away from Sam Raimi's Doctor Strange in the Multiverse of Madness which will absolutely feature a Bruce Campbell cameo, so let's celebrate the duo's original masterpiece with a look at NECA's Ultimate Ash Williams from The Evil Dead. I picked this up from one of my favorite shops, Back in Time Collectibles in Gastonia, NC, so check them out if you're ever in that area. Now, let's take a look at Ash after the break.... 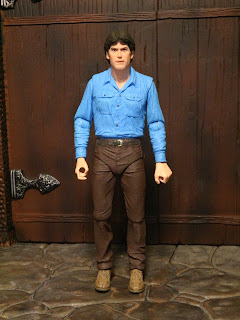 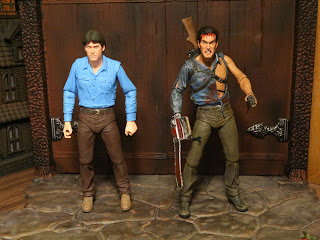 Comparison:
* Here's a shot comparing this Ash with the Hero Ash from Evil Dead 2 that NECA released in 2018. As you can see, they're completely different figures. I compared this Ash to all of the previous releases I own and I didn't see any reuse. I always wondered if NECA was ever going to release an original Evil Dead Ash as a simple exclusive or something with a new head back when they released the Evil Dead 2 line but they really knocked this one out of the park. 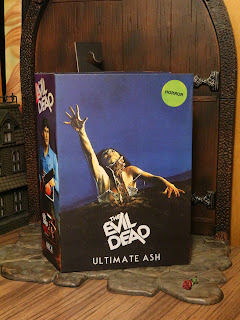 The Packaging:
* Ash comes packaged like most other Ultimates: In an opening window box. That's not too unique or anything but it does allow you to see the figure nicely displayed (something Hasbro isn't planning to allow us to do for much longer). The cover is reminiscent of the old VHS cover, too, complete with a video store styled sticker denoting the genre (horror, if you couldn't tell). 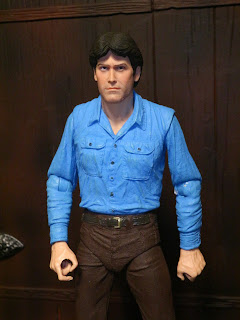 The Positives:
* Here's Ash. Long before he was the groovy hero of time who toted a boomstock, said farewell to arms, worked in housewares, and was known as "el jefe" to his posse, he was just Ashley Joanna Williams, a Michigan State student who went on a weekend excursion to rural Tennessee with his sister, his girlfriend, and two friends. Ash was just an average guy and this figure shows that. A blue long sleeved shirt, brown slacks, and an average build. Bruce Campbell was much younger when filming The Evil Dead in 1979 and by the time the film was released in 1981 and promotional ads and such were made, he looked quite different. This definitely captures his younger appearance and NECA did a great job on the details of the outfit. There's a nice bit of texturing on his shirt and pants that should satisfy anyone dedicated to film accuracy. 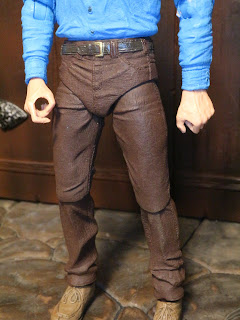 * His pants look really cool. I don't know why but it definitely shows the attention that NECA puts into their figures. The pants must be really impressive because when I was checking this guy out at Back in Time Collectibles my wife commented that the looked really well done. She's something of a seamstress herself, so I guess she was impressed. 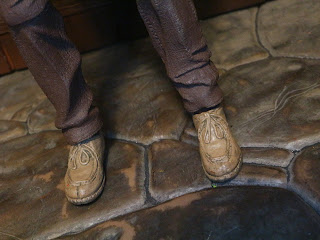 * Let's take a look at Ash's shoes. I couldn't tell you what Ash's shoes looked like in the first movie off hand but this seems to be a pretty good replica of them as far as I can tell. Very casual. Definitely not something you'd think of wearing to go out and slay Deadites. 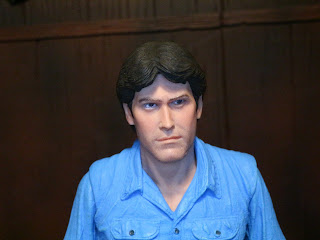 * Let's take a look at the portraits and see if they capture the likeness and chin of one Mr. Bruce Campbell. I really had to go back and look at how different Bruce looked between the first and second films and, as I mentioned earlier, he even looks different in the promotional materials and such as they seem to have been created a good year or two after filming. Ash seems to use facial printing and it looks really impressive. Very lifelike. This is a standard, stern expression that looks good for most displays. Bruce Campbell's eyes are very expressive in the first film and NECA definitely gave him some side eyed expressions here. It works, though, and adds a lot of character. 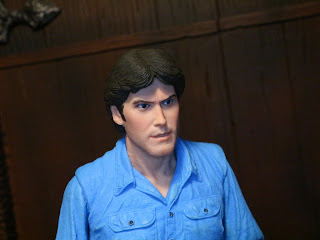 * This second portrait is a bit more intense. It works well for conveying Ash as surprised, nervous, or getting angry. His chin is well sculpted and chiseled and his hair definitely captures Bruce's from the film. This one might be the best likeness of the three. 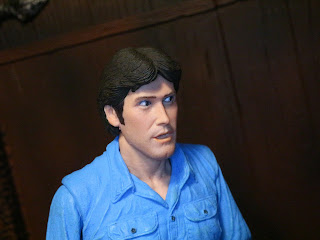 * The third portrait tries for an expressive likeness with Ash looking to his left, mouth agape. He's definitely startled here, possibly even about to let out a yell. Expressive portraits can be difficult but this one is pretty good. The features look a little long but, again, it's tough to tell with an expressive pose. I used this portrait in the opening shot of the review and I think it worked really well there. 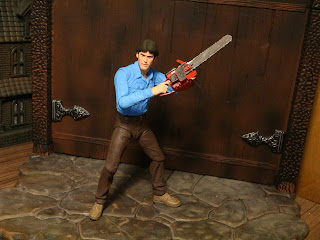 * If you've picked up any NECA figures in the last few years you know what to expect. While NECA includes all of the joints you'd expect on a modern action figure they're not what I'd call super-poseable. You're not going to have Ash crouching like Spider-Man or anything. He does look fantastic in very realistic poses, though. He seems sturdy enough (my last real NECA QC issue was back in the first series of the Aliens line, so I've been pretty satisfied with them) and there's a solid range of movement from most joints. 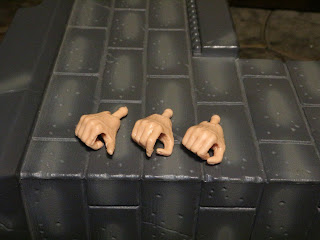 * Ash doesn't come with many extra hands and what he has are just alternate right hands. He has a two tighter grips with different thumb poses and a trigger grip for the shotgun. They swap easily and allow him to interact with most of his accessories. 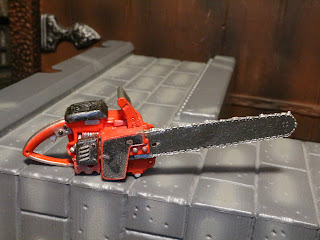 * Ash does use a chainsaw in The Evil Dead but it's a different model from what he uses in the sequels. The original film used a Homelite XL-12 and NECA did a stellar job of recreating it here. The XL-12 logo isn't present but all of the other details are there and this bad boy is nicely weathered. NECA really does some fantastic work on accessories and this piece is extremely impressive. 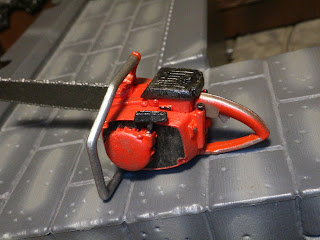 * Here's a look at the other side to see the started cord and more of the paint details. There's even a gas cap. Groovy. 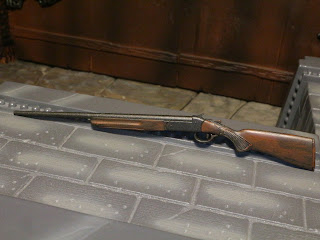 * Ash didn't use a double barreled shotgun in the original film. Instead, he used a single barreled break action Winchester Model 37A. It's also apparently a 20 gauge. Ash finds this in the basement of Professor Knowby's cabin and uses it throughout the film to brutally dispatch some Deadites. Great sculpt and excellent paintwork make this one of the key accessories you'll want to display Ash with. 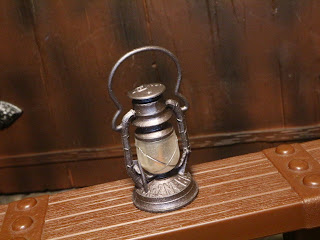 * If you want more details about the props from the film, check out the website Book of the Dead. They've got some great info there. Did you know this lantern is a Dietz No. 2 D-lite lantern that uses kerosene? I didn't! It's weathered, rusty, and it actually has the word "NECA" on the base. Kind of a neat Easter egg since they probably couldn't use the company name. 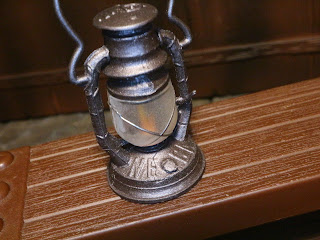 * Here's a closer look at the base of the lantern, the transparent glass dome, and the flame inside. That's really cool! Definitely a necessity when you're busy searching through the cellar. 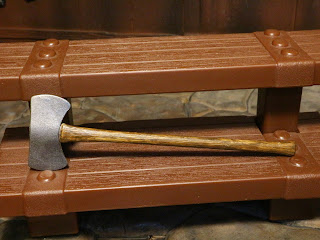 * Wait! Ash didn't use this axe in the film! That's true. He used an axe, but it was a single bladed axe. So where this did this come from? It actually comes from this promotional shot where Bruce Campbell is clearly a bit older and has a different hairstyle. I'm sure you can find a single bladed axe, or perhaps NECA will release an alternate version of this Ash. Maybe covered in blood from the end of the film? 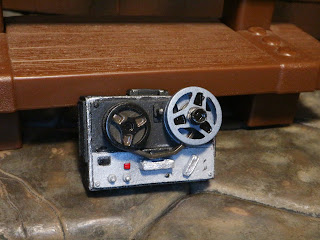 * NECA first released this accessory with the Deadite Ash figure from 2012 but this version has been augmented a bit to match the Panasonic Solid State RQ-706S reel to reel tape recorder seen in the original film. The reel on the left is different than the reel from the Evil Dead 2 version (though the same prop was used in both films) and the paint applications are slightly different, too. 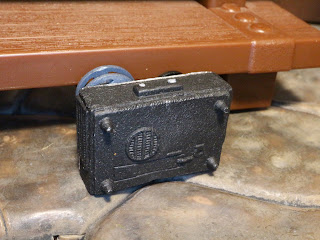 * Check out all of the detail on the back and sides. This is a pretty crazy replica of the real deal. 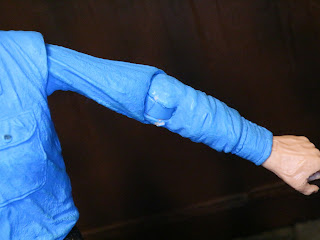 The Negatives:
* As we get to the negatives, first up is an issue that's common to many NECA figures: Painted elbow joints. I've been treated to some flaking already due to the paint on the elbow joints. 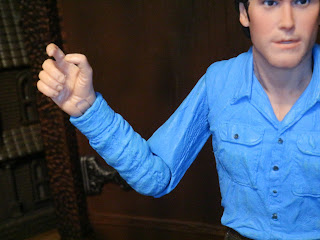 * The elbows are the site of the second issue I have with this figure, too: The range of motion there is fairly limited. Not the worst but definitely only a 90 degree bend. The problem is that the package clearly shows Ash holding his axe over his shoulder and behind his head like the movie-poster/ publicity shot I mentioned earlier. I don't think that's really possible, though, so it's weird for NECA to include accessories for that pose, use that pose on the box, but then not ensure that the figure can take that pose. 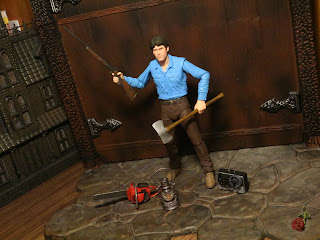 This is an excellent, Epic Ash figure that has way more effort put into it than I ever expected. Three portraits, mostly new accessories (just a bit of reuse on the tape player body), and a completely new sculpt that captures the first appearance of Ash quite well. It's a really solid release and I'm thrilled to have gotten my hands on it. I've wanted a classic The Evil Dead version of Ash for years and I'm very satisfied with what NECA has released. I do expect we'll see at least one variant, probably a bloody Ash from the end of the film. NECA didn't include certain significant props like the shovel, the film axe, the Kandarian dagger, and the Naturom Demonto, so I could see those helping to anchor a second release. Who knows if we'll ever see more Deadites, though?
The forces of evil fear Ash Williams! Keep them afraid by checking out all of my Ash reviews: The Cult Classics S-Mart Ash, the NECA Evil Dead II Deadite Ash and Hero Ash, and the Hero Ash update from the 2-pack with Evil Ed, the Toony Terrors Ash, and the One:12 Collective Ash.
Posted by Barbecue17 at 4/27/2022