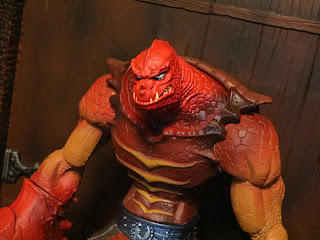 The 1984 series of Masters of the Universe figures brought quite a few new Evil Warriors into the line, many based on different animals. Clawful is a giant crab man and while he didn't get a true action figure in the 200x series released by Mattel he did get a "staction" in NECA's Masters of the Universe line. Designed by Four Horsemen Studios, the stactions are some of the coolest MOTU products ever created. Clawful was part of the first series which made perfect sense; he appeared quite often in the Mike Young Productions animated series and his absence in the basic toyline was rather bizarre. ready to dive in and see what Clawful's all about? Then join me after the break... 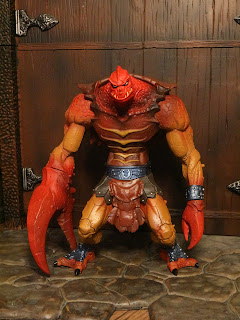 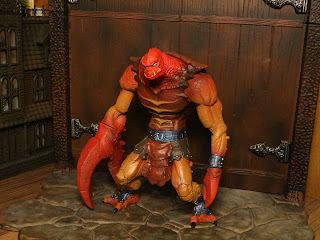 The Positives:
* In the MYP animated series Clawful was pretty big. Dumb, but big. The stactions were nice because they didn't have to be as standardized in size as Mattel's toyline was, so Clawful was able to be much larger and intimidating compared to most other figures. I love his large, lumbering appearance that enhances his monstrous nature. he also stands perfectly fine on his own if you don't want to use the included stand. 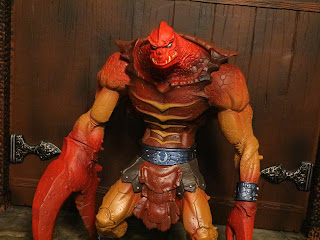 * Clawful looks incredible. This is claws down the best version of Clawful ever made. Yes, I know he isn't articulation, but the appearance of this figure is just amazing. Rather than looking like a wrestler in crab themed armor, this version of Clawful looks like a crab person. His skin and musculatur are inhuman and covered with a chitinous exoskeleton painted with different shades of red and tan. There are so many different paint applications and textures here that it still looks impressive. 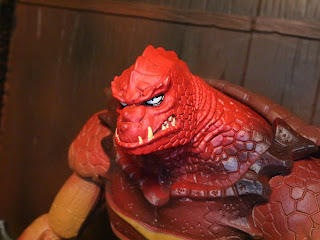 * The vintage Clawful had a headsculpt that kind of resembled a Muppet. It's one of the goofier vintage heads and while it has it's own nostalgic charm, this version of Clawful is far more terrifying. He's still a bit "henchmanish" if that makes any sense (I think it's clear he's still not the brains of the operation) but he looks pretty fearsome. Those eyes and teeth show he means business. 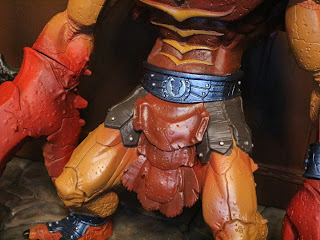 * The Four Horsemen had a lot of fun with the belts in this line and Clawful's has a chitinous flap hanging down that looks like something you'd see on a shellfish and a crab claw emblem on his belt. 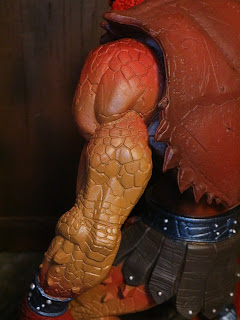 * While the vintage toy had standard arms, this version of Clawful has skin with a really interesting, almost scaly texture. It's really unusual looking and definitely helps to set Clawful apart as a member of the Karikoni rather than just a guy in a crab mask. 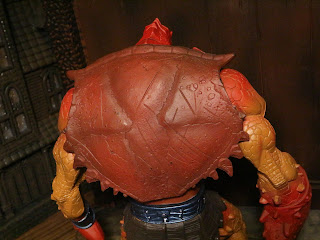 * The back of Clawful's shell is really cool. It seriously resembles the shell of a grab and both looks awesome and makes me hungry at the same time. The detail on this figure really is impressive. It's cool that this line really gave the Four Horsemen the freedom to totally let loose and come up with their own vision of the denizens of Eternia. I'd love to see this line continue in some way to get to characters never explored like the Princess of Power characters. 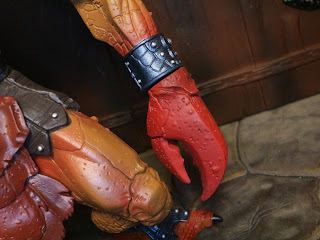 * Not only are Clawful's clawsused for holding stuff and as weapons but they're how his people communicate. The claw on Clawful's left hand is the smaller of the two. It's designed to hold his mace as well. 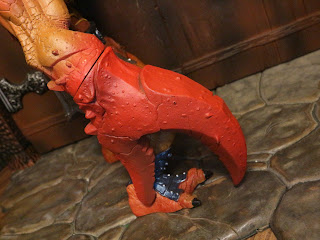 * Like a fiddler crab, Clawful has two different sized claws and his right claw is absolutely massive. It almost drags on the ground it's so huge. It's pretty brutal looking, though. Can you imagine how much damage Clawful could cause with this thing? It'd be epic! 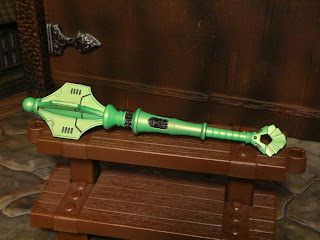 * Clawful comes with a slightly more modern version of his classic mace. It looks like it's made of metal and has some technological details on it. Maybe Tri-Klops or Spikor made it for him? 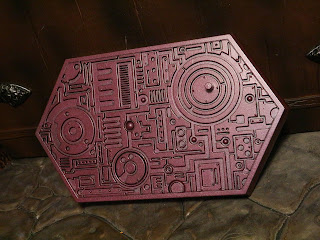 * Clawful can stand just fine on his own but he still comes with a display stand with lots of technical details. These figures are made from a sturdy plastic (with softer plastic details) so they're not incredibly fragile like you would think of a statue typically being. They're very similar in construction to NECA and McFarlane products from the early to mid 2000s. 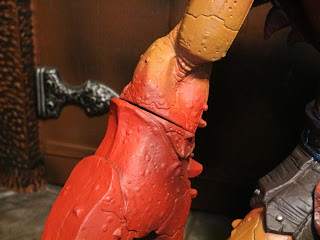 The Negatives:
* There are a couple places on Clawful where you can clearly see that multiple pieces were put together. It's odd to see lines like this on a nonarticulated figure. Not terrible, just a little odd. 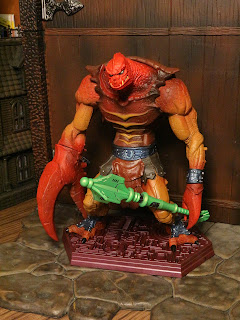 Clawful is amazing and an Epic piece from NECA's Staction collection of Masters of the Universe figures. While Masters of the Universe Classics is still my favorite Masters of the Universe line (and my favorite toyline) of all time, I really do love what NECA and the Four Horsemen did with the stactions. This was a chance to really go all out and see these beloved characters in new and exciting ways. This line didn't seem to have to worry about sharing parts, maintaining a vintage aesthetic, or maintaining a particular style that the corporate executives wanted to see. It was a labor of love that made the best looking MOTU toys ever. Obviously articulated versions of these characters would be a dream but still being able to see these figure standing on their shelves next to their 200x brethren is pretty amazing.
Are you a fan of Clawful? Then get a big side of melted butter and check out my reviews of the MOTU Origins Clawful, the M.U.S.C.L.E. Clawful from Series 3, Pack A , the Funko POP! Clawful #1018, and the MOTUC Heads of Eternia pack that features a Clawful head.
For more Masters of the Universe products from NECA check out the following:
Clamp Champ
Grizzlor
Hordak
Hordak Mini Bust
Rio Blast
Series 3 Exclusive Micro-Busts (Man-At-Arms, Mekaneck, and Teela)
Sorceress (Classic Deco)
Sssqueeze
Posted by Barbecue17 at 4/05/2022