Over the past week I've reviewed the Decimator and the Crawlers so now it's time to take a look at the third of the Kharn "Perimeter Defense" weapons: Huntra. Huntra reminds me of a cross between the Crawlers and the Crawler: Smaller, spindly legs with a bug head like the Crawler but armored legs and a large turret on top. The Huntra has two missiles. These look like some sort of energy or perhaps bio-weapon rather than straiht up missiles, so maybe these guys shoot their own energy of sorts? Gross. Let's take a look at the Huntra after the break... 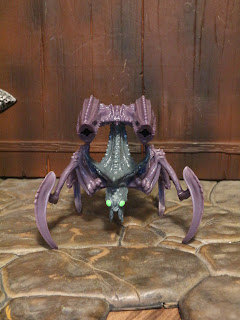 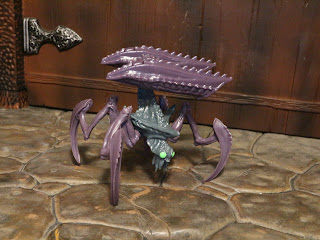 The Positives:
* Huntra is a 4 legged insect-like alien. There's not a lot of paint on it but the different plastic colors for the legs and body do make it look more complex and it doesn't look bad at all. There's a lot of detail in the legs and the body to show off the Huntra's alien physiology. 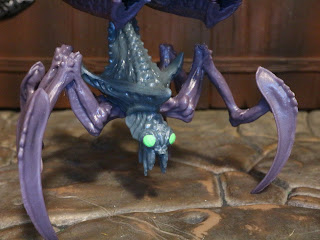 * Huntra's head hangs down below it's body. The head is vaguely Cthulhu-like with face tendril and it's sporting large, glowing green eyes as well. 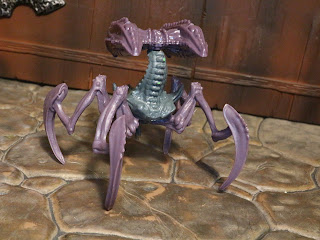 * Here's a look at the back of the Huntra. More shots of the wicked cool legs and the interesting exoskeletal spine that supports the turret. 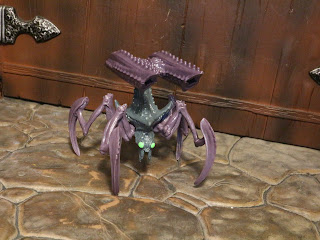 * The Huntra doesn't have as much articulation as the other creatures but it can still move. The left and right legs swivel forward and backward as one piece while the turret can rotate to acquire targets. 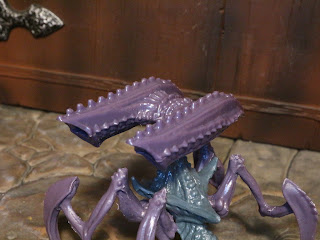 * The turret also looks like something that's organic yet perhaps engineered. Maybe the Kharn bio-engineer these smaller creatures that serve as weapons? The ridges down the sides of the barrels do add a bit more menace to this drone. 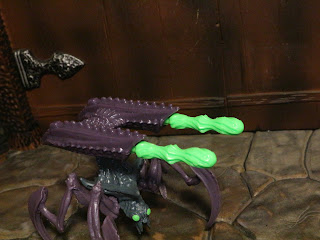 * Huntra has two firing missiles. They're different from the missile included with Decimator and they fire nicely. Good distance, decent power. Great for taking on Alpha Team 1. 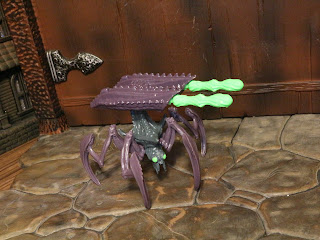 The Huntra is an Epic little guy as well. Seriously, for $1.25 this guy is excellent. Even if you're not collecting the Final Faction figures there's no end to what you can do with these little fellows in your collection. Heck, you could use these with Micro Machines or something to have some Starship Trooper inspired battles. Gosh, now I want to pull out all of my military Micro Machines and have a massive battle. A bug like this can fit in with any scale of toy. Plus, he fires missiles. Missiles! Yeah, Huntra is a good one for sure.
This is the first figure of Huntra I've reviewed. For more Final Faction toys check out the following:
Amari
Arrow ATV
Arrow ATV Weapons & Armor
Churro & FD-0
Crawler
Decimator
Diabol
Riptide
Spc. Scope
Torn
Posted by Barbecue17 at 4/08/2022