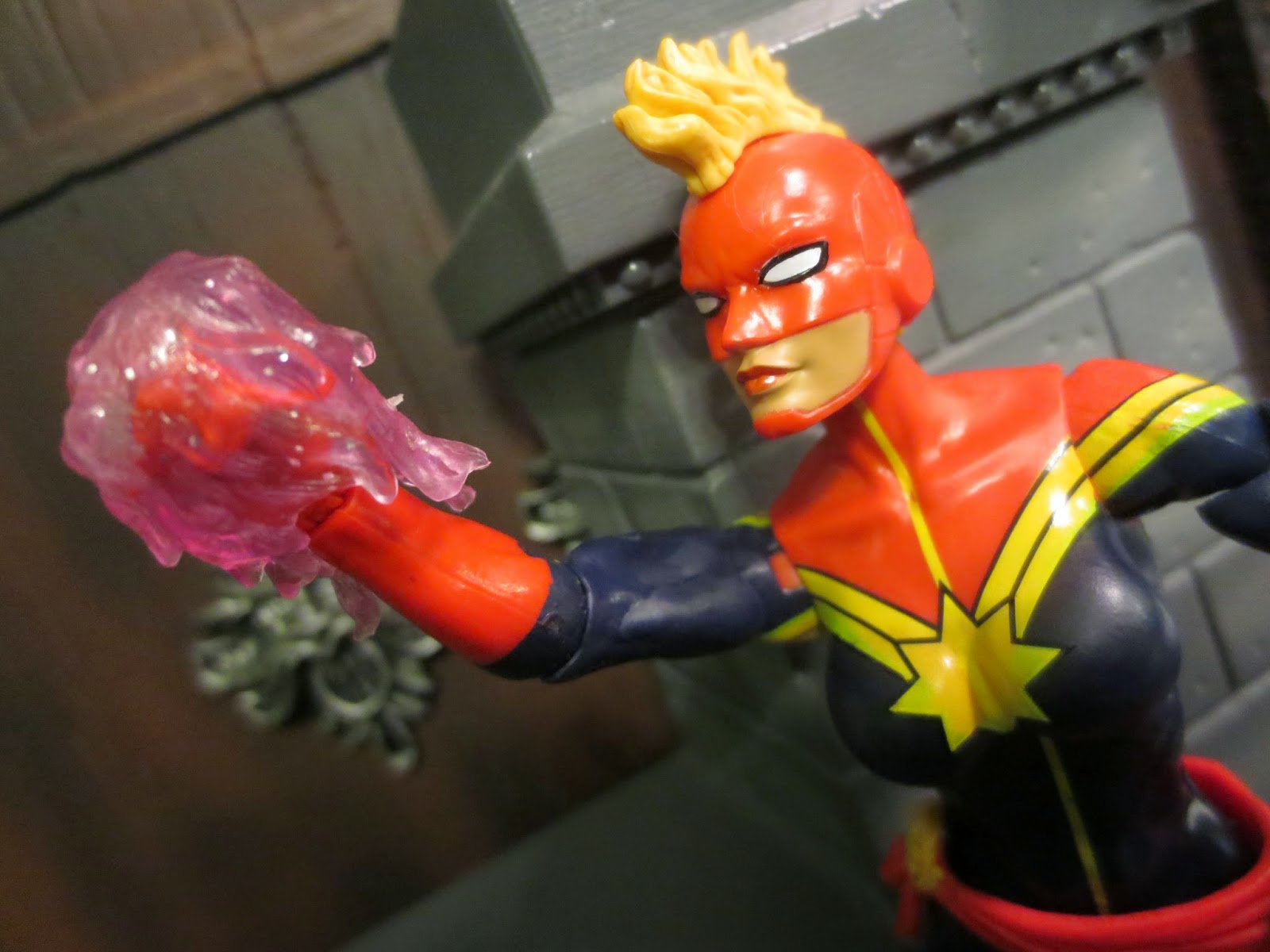 Captain Marvel is going to get her own movie from Marvel Studios. It's scheduled for November 2018.  Who wants to bet that she appears on the silver screen before DC's Wonder Woman film comes out in 2017? Yup, while Carol Danvers has existed in the Marvel universe since the 1960s and became Ms. Marvel in 1977, she really seems to be breaking through into popular culture. Good for her! Carol's an awesome character and she deserves to stand alongside all of the other superheroes. That's why I'm a bit aggravated that, once again, Hasbro decided to lump her together with Scarlet Witch under the label "Maidens of Might." Yup, Hasbro couldn't even give the awesome Ms. Danvers her own name on the package. That's just lame in my book. Carol was originally supposed to make an appearance in Avengers: Age of Ultron but it was decided to hold her back. As much as I look forward to seeing her on the silver screen, it's probably for the best. AOU not only has to introduce us to Ultron but also is going to have to work in Vision, Scarlet Witch, Quicksilver, and anyone else they're going to sneak into the movie. While you might have to wait a few years to see Captain Marvel at your local theater, you can purchase her action figure right now as part of the Marvel Legends: Infinite Series Allfather wave. Ready for a closer look at Captain Marvel? Then join me after the break... 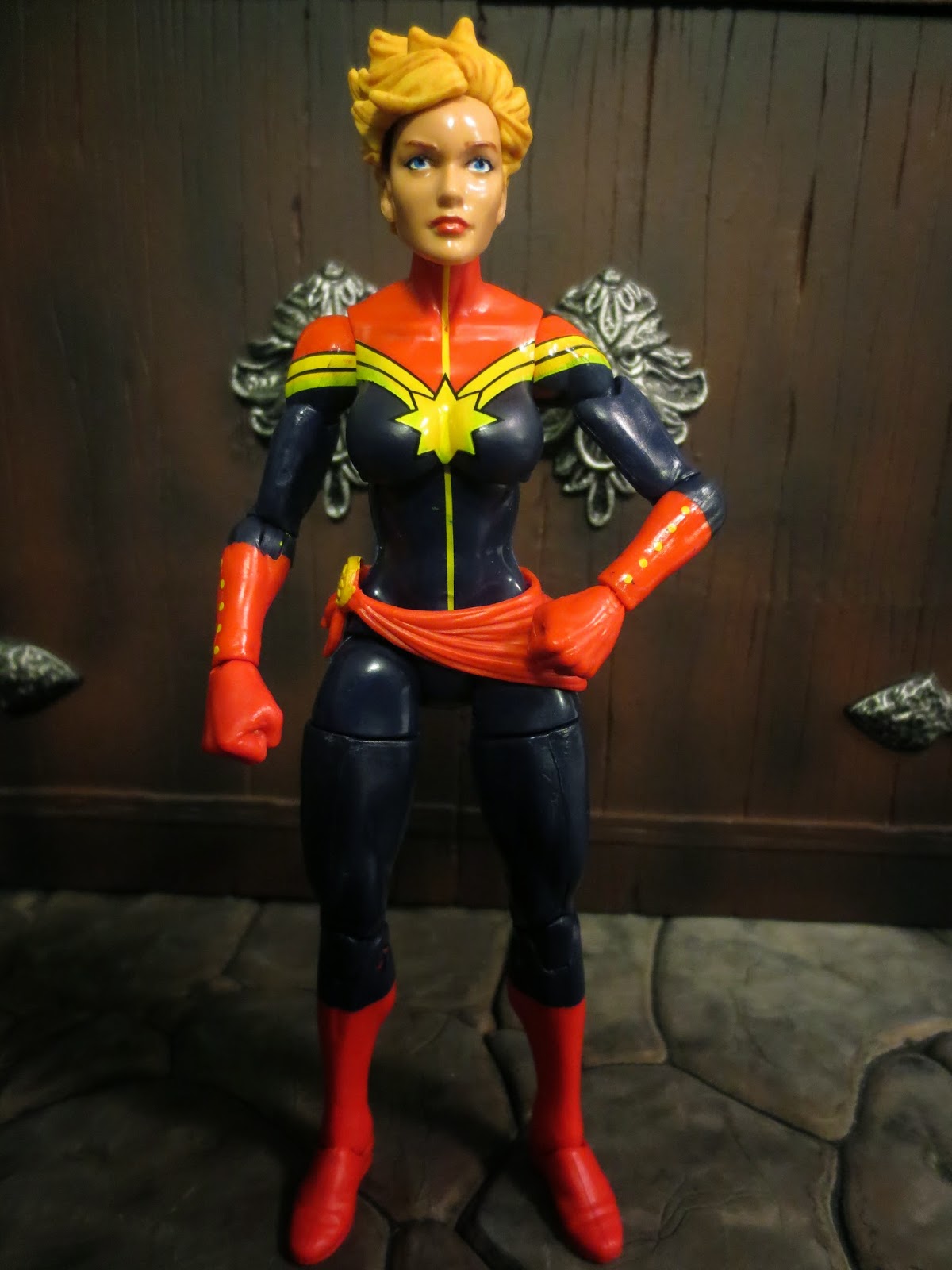 *Hasbro really has just done some great work on the presentation of these figures. I love the style: They look suitably heroic but not overly stylized or tied to one artist's particular rendering of the character. If you want Captain Marvel to interact with any of your Marvel Legends (or even your DC Universe Classics figures) she'll be up for the task. 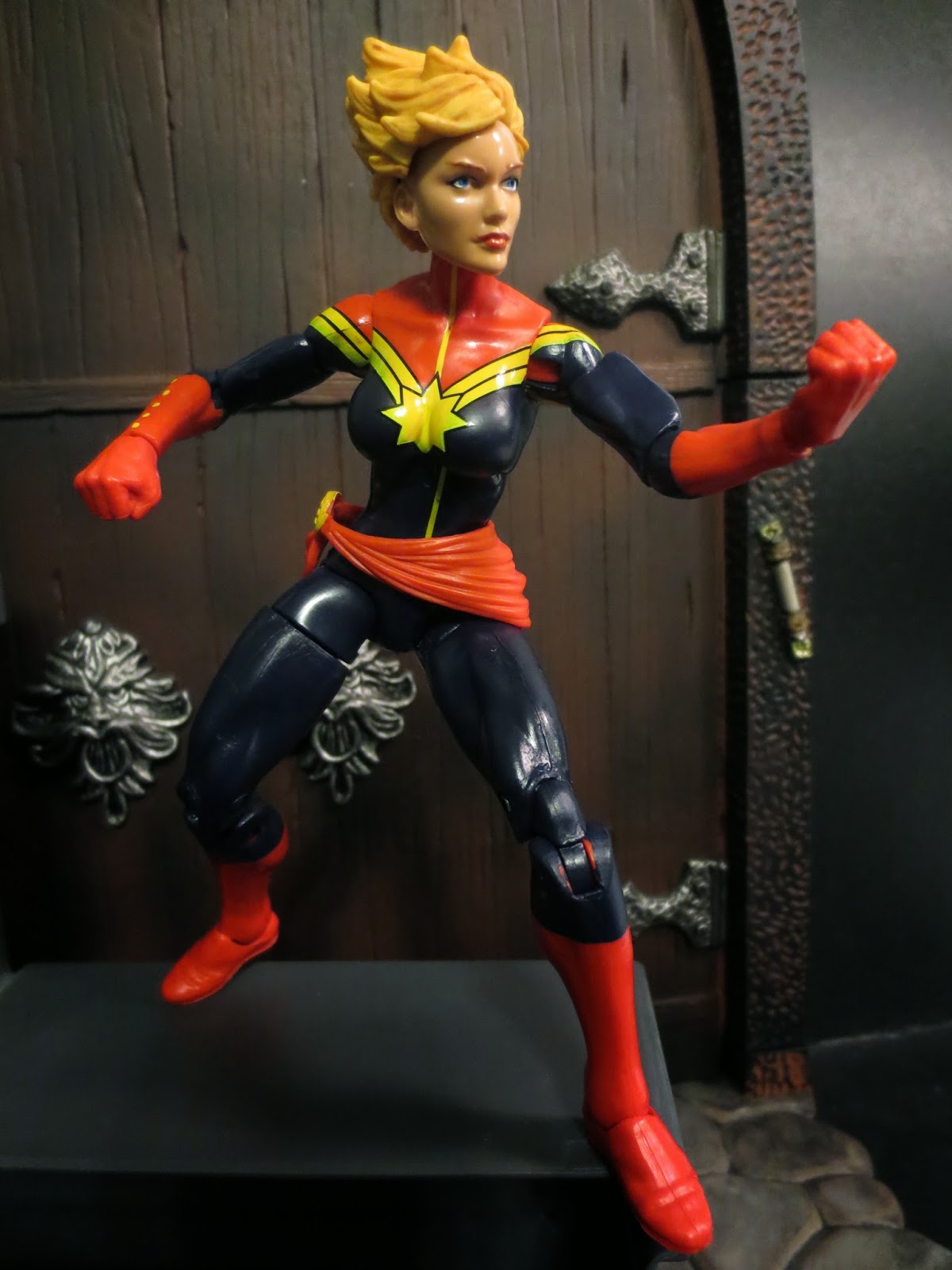 *Captain Marvel is without a doubt a highly articulated figure. The articulation looks good with the sculpt, feels solid, and doesn't leave me feeling like any needed joints were missing for the most part. 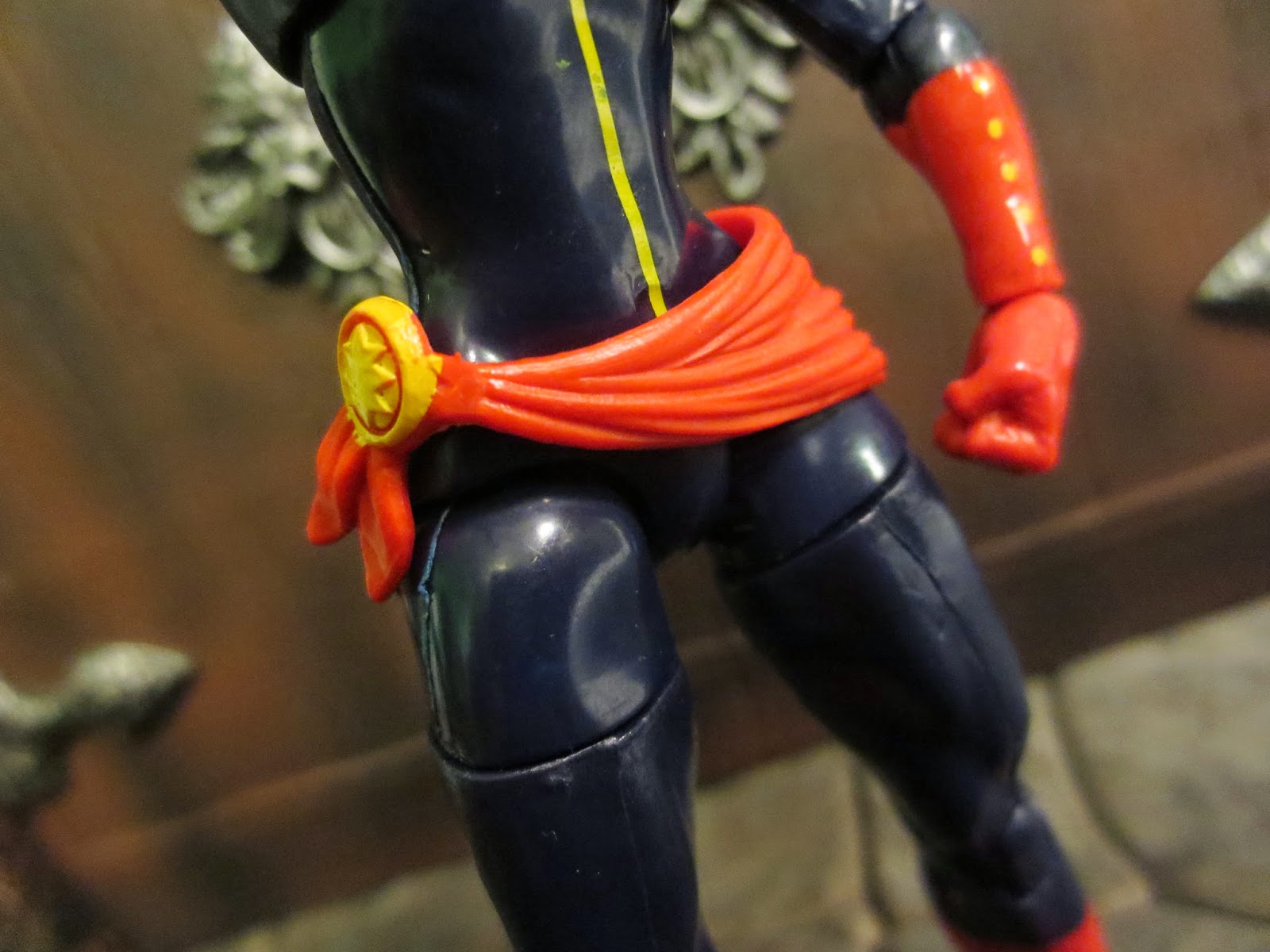 *The body sculpt is nice. As far as I'm aware it's exactly the same sculpt as the Ms. Marvel figure that was released in the Target three pack last year. There's not really any costume details sculpted on the figure, as that's all accomplished with paint, but the build looks right for Carol. There is a sash piece that's reminiscent of Carol's Ms. Marvel costume. It's a free floating piece that rests on her hips but, unless you take the figure apart, it's not removable. The head sculpt is great, though. I love her short, flowing hair cut. It definitely looks like she's in the middle of some action with her hair going every which way. 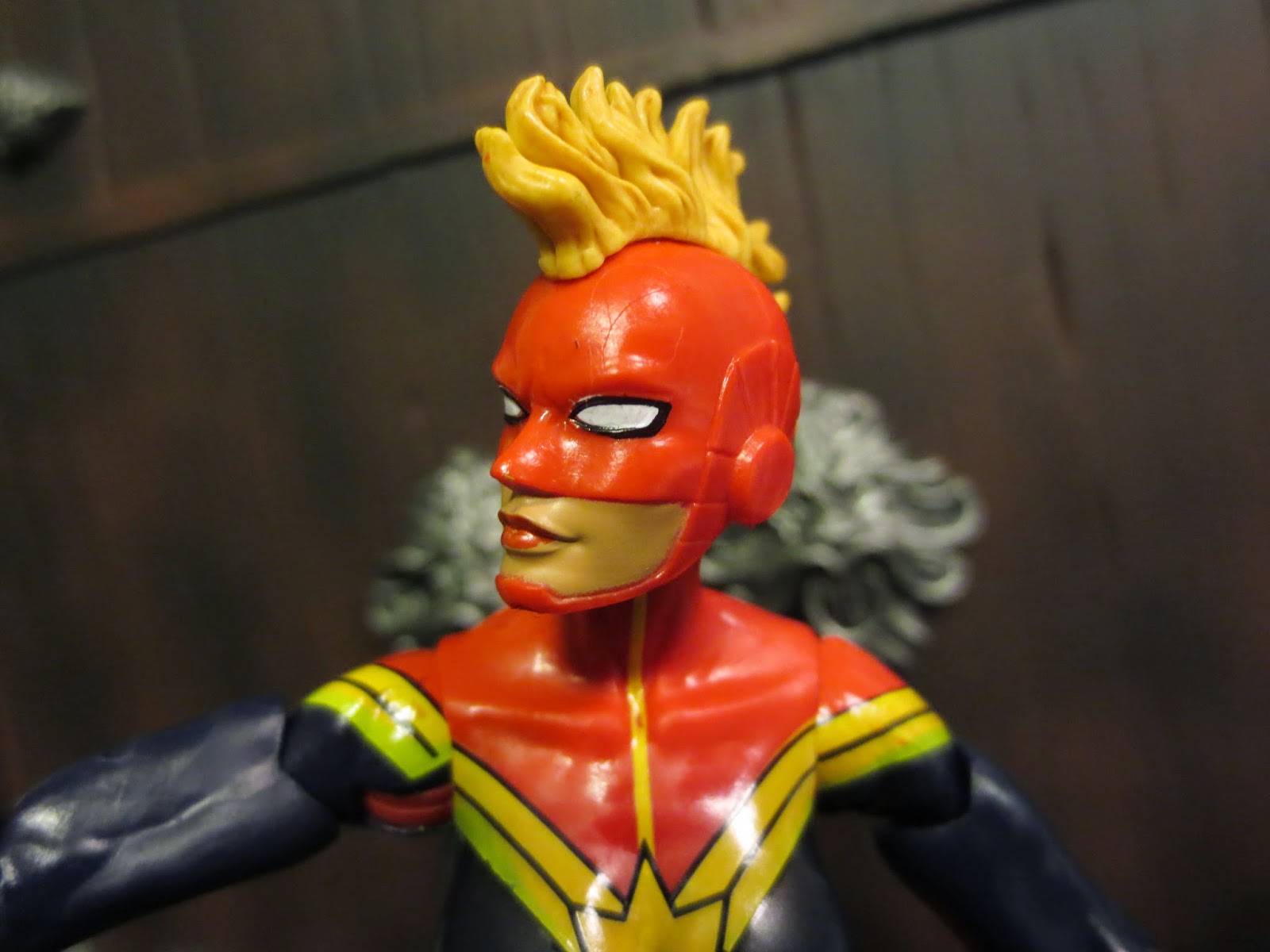 *Captain Marvel also comes with a really cool alternate portrait that shows her wearing a combination battle helmet/ flight mask. Her hair is flowing out of the top in a mohawk and looks fantastic. Or should I say...Marvelous! Anyways, extra portraits are always welcome and this is a stellar one. I love the whited out "superhero eyes" on the sculpt, too! 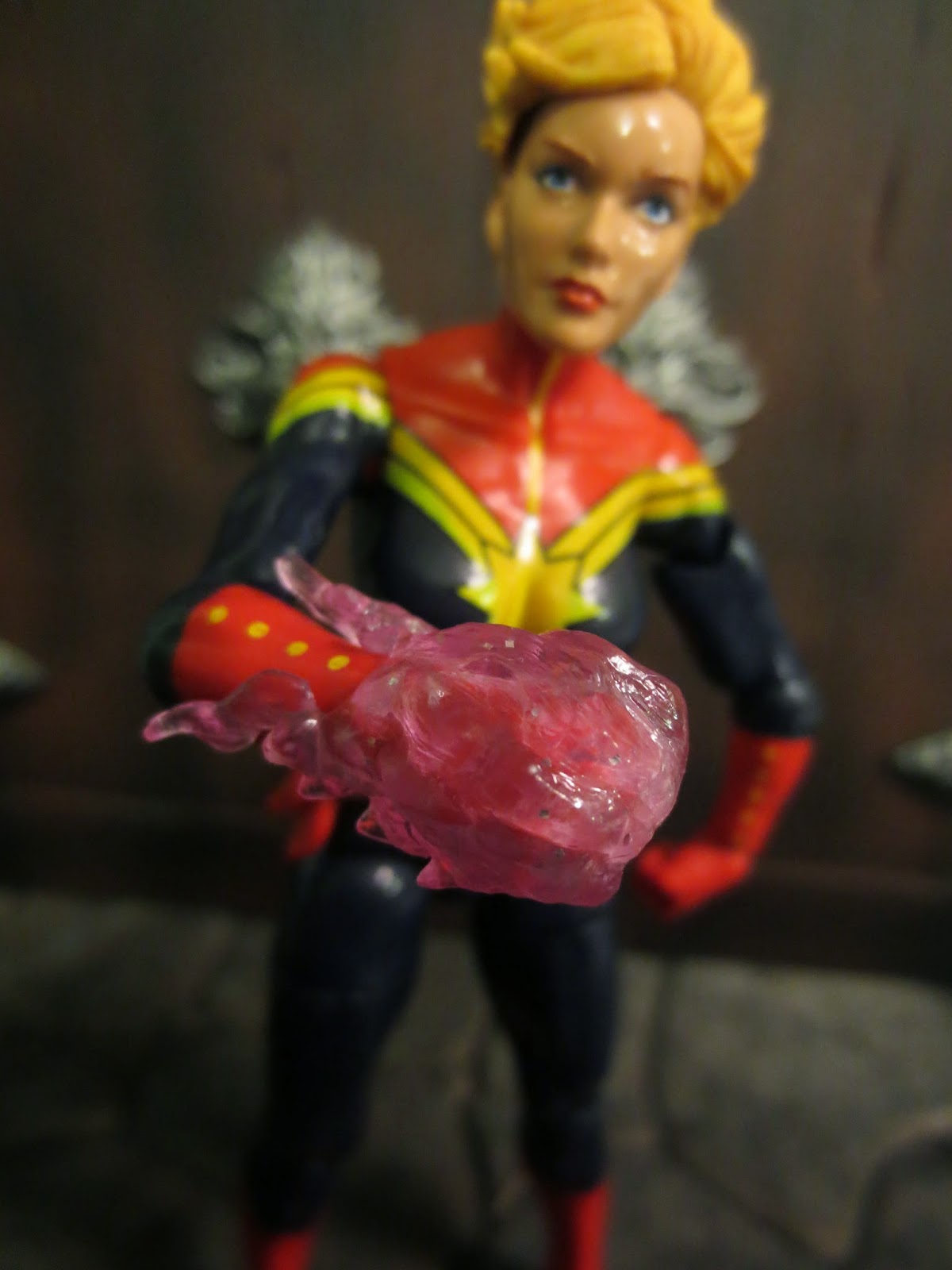 *Since Ms. Danvers can also manipulate energy (along with having like...187 other super powers) she comes with a translucent energy piece that fits over her fist. It does look rather dynamic; I always love energy bursts and stuff. 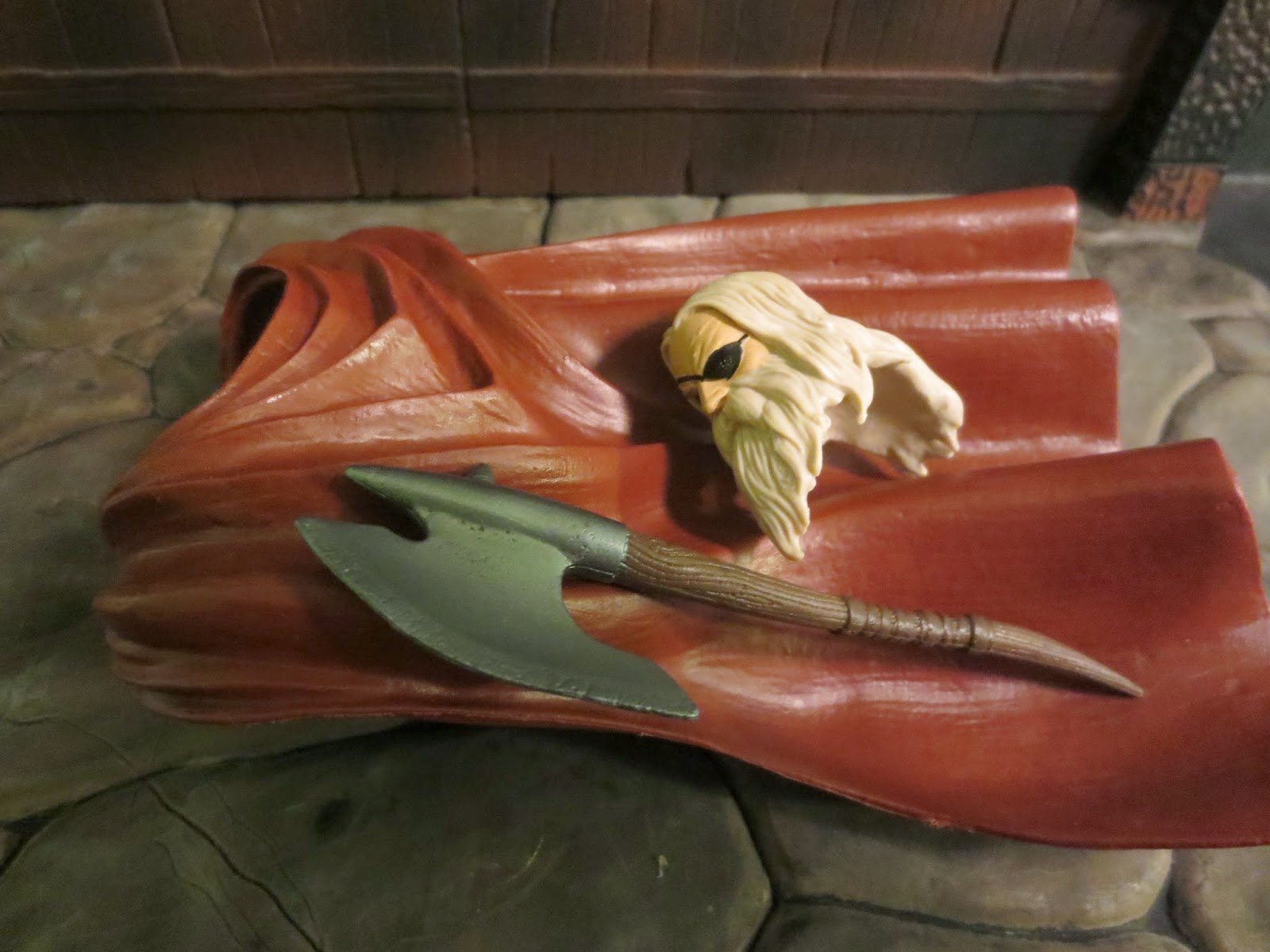 *Of course, you get the Build-a-figure pieces as well. It's a cape, axe, and head for the Old Thor variant of the Allfather Build-a-figure. If you're building this figure this is needed. If you're not than it's an extra axe. I'm trying the stuff with MOTUC figures, too. Extra heads can always be put to good use. 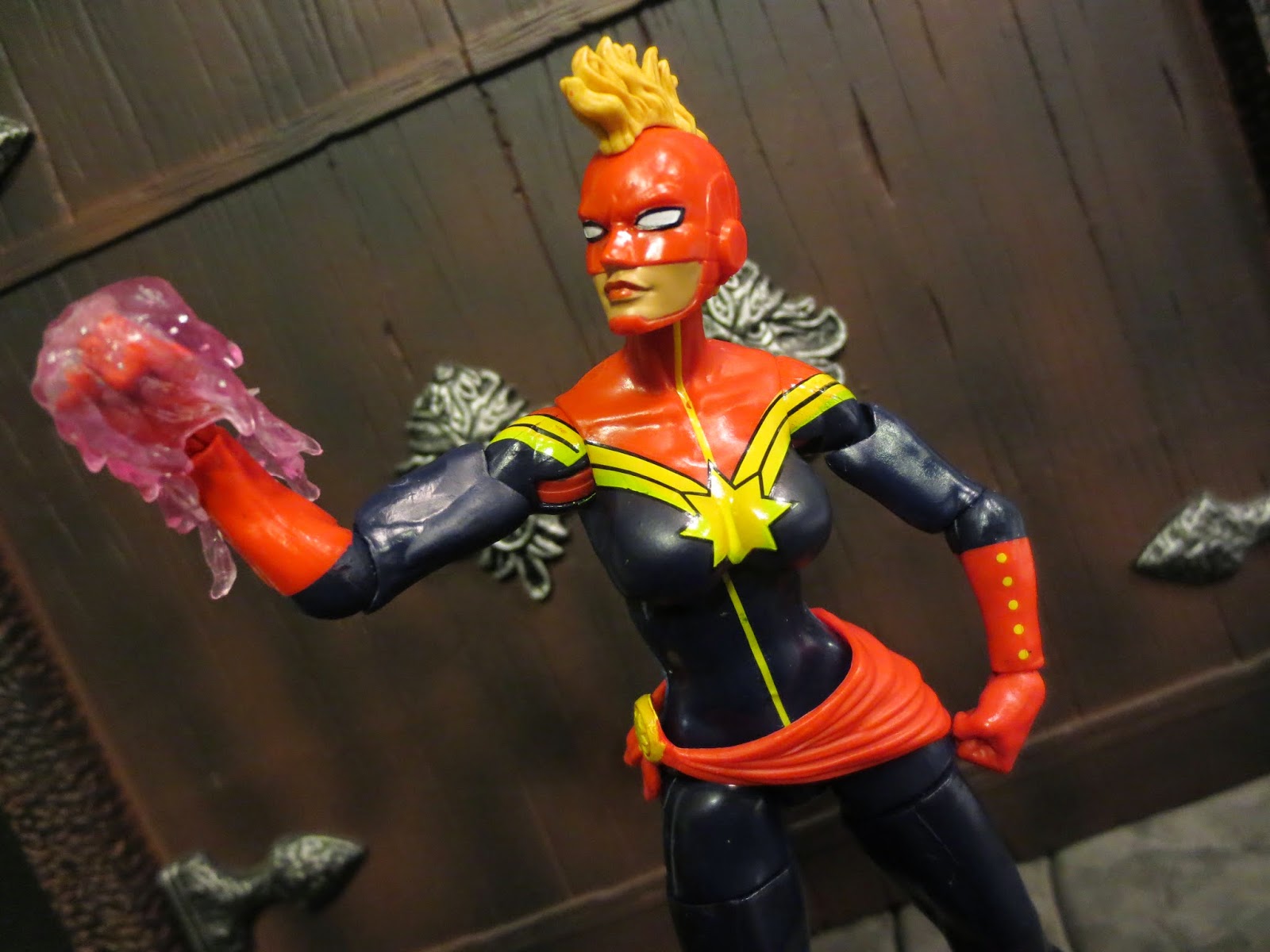 *I mentioned the articulation above as a positive. The only problem I had with the logistics of the figure is that the biceps swivels feel a bit weaker and a bit rubbery. Captain Marvel's left shoulder was a bit tight and as I was trying to get it unstuck I felt like I might accidentally damage the bicep peg. It's rather interesting that Captain Marvel has both swivel/hinge elbows and bicep swivels. That's not a problem, though. Just an observation. 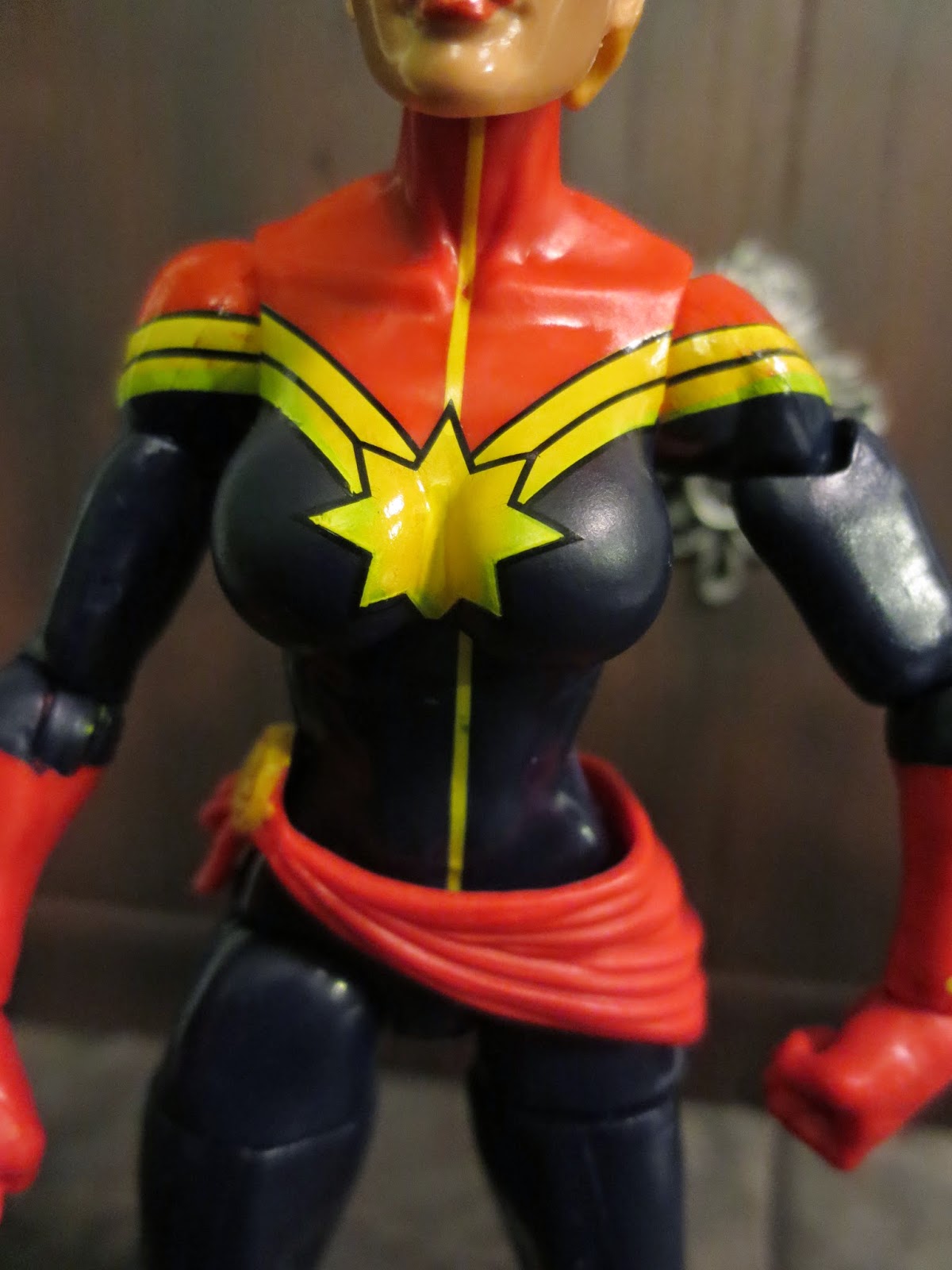 *Overall I really like the design of Captain Marvel's costume but the fact that it's all rendered with paint is a bit of a letdown. What's even a bit more of a letdown is the way that the yellow stripes and star on the chest turn greenish on the edges due to the dark blue plastic that the body is molded in. The red and yellow together look great but yellow on dark blue is just problematic. Not a deal breaker, but definitely a..fly in the buttermilk? Is that a thing? That's what I'll go with.

*One thing I wish that Captain Marvel had a hinged neck peg like the Star Wars Black figures. This would have been awesome because she is known for flying. I mean, Carol Danvers has a ton of superpowers, but she's definitely known for being able to fly and fly fast. I always get aggravated when flying characters don't get better neck joints so they can see where they're going. 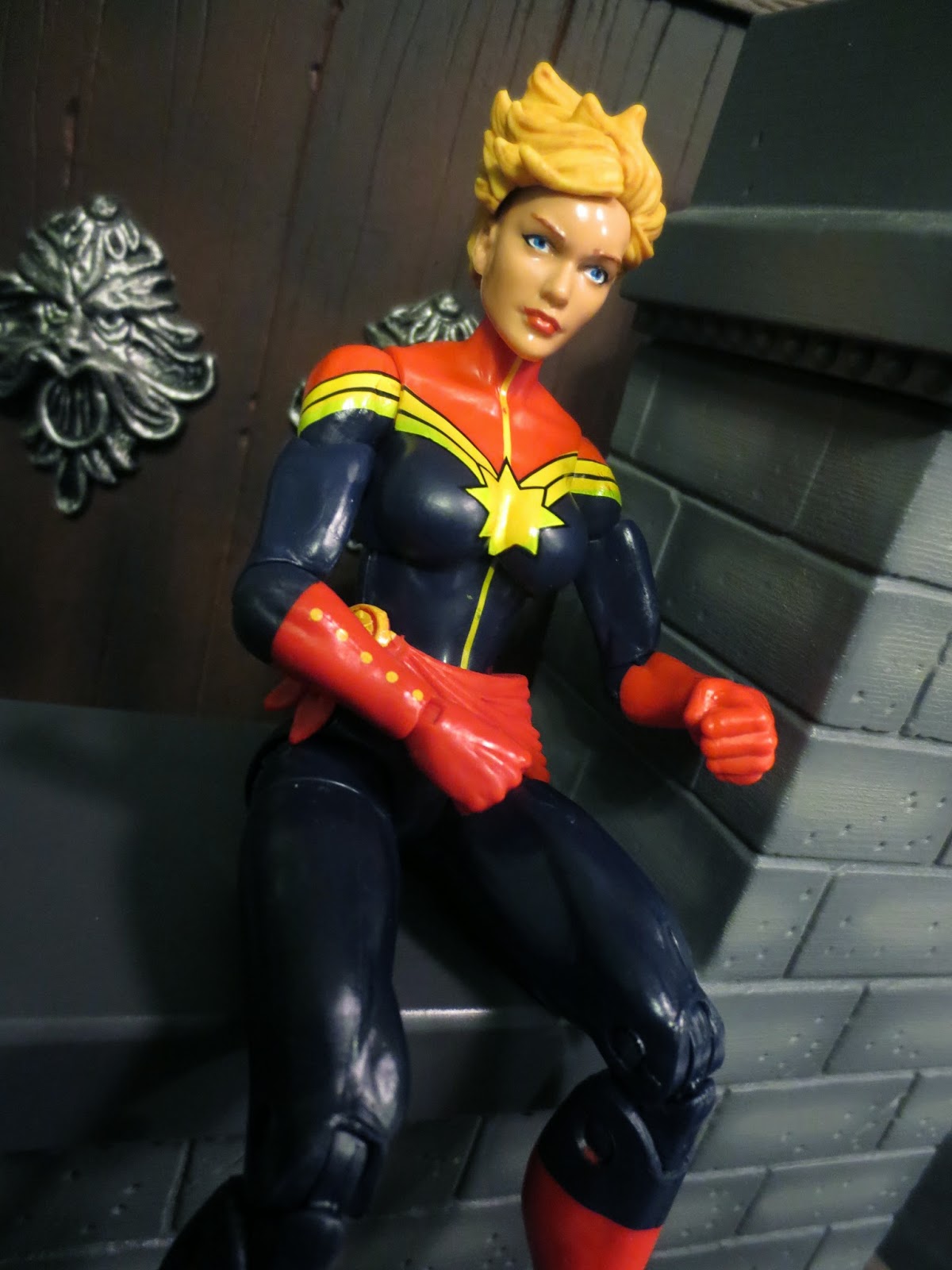 Captain Marvel is another nice Marvel Legends figure. While her body sculpt isn't terribly unique she does manage to have two excellent head sculpts and a colorful, dynamic appearance. I've been a big fan of Carol as Ms. Marvel in the past and I like her just as much as Captain Marvel. Hasbro has been doing an excellent job of finding that fine line between creating superhero collectibles for adult collectors and creating toys for kids. While I wish her paint work were a bit better (the yellow stripes are a bit ugly due to the darker plastic underneath) and that her bicep pegs were a bit thicker, overall I can't help but really dig this figure. I'm very content giving her a Great rating! When the Captain Marvel film comes out in 2018, perhaps we'll see a whole slew of Captain Marvel action figures. Until then, though, this is probably the best version around!