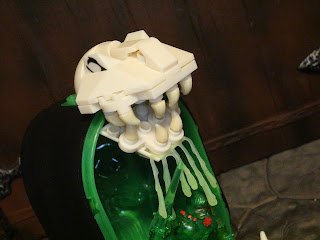 There's a new Mega Construx miniature set packaged in a plastic Skeletor head showing up right now and this time it's a Zombie He-Man with the Slime Pit. The package calls this Zombie He-Man Horde Pit which sounds like a really weird translation of a manga title, right? I was surprised that Mattel never put a Slime Pit into Masters of the Universe Classics considering it's the simplest vintage playset and seemed like it would have been a great addition to the line and, so far, we don't have one in Origins yet, either. This is a definitely a take on the Slime Pit although I'm not sure that it fully satisfies me as a Mega Construx recreation of the vintage toy. It's like 50%-60% of the way there, though, and it is a neat little set for $10 bucks. Plus, the Horde Zombie He-Man is just an incredibly cool figure. I love the Mega Construx minis. They're some of the best building block/ minifigures ever. Let's take a look at this set after the break... 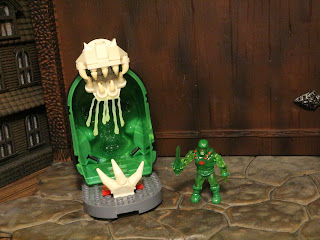 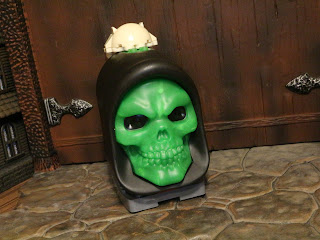 * The sets in this series all come packaged in a plastic Skeletor head. They're all the same sculpt but molded in different colors. This one gets a black, and a translucent green skull with black eyes. 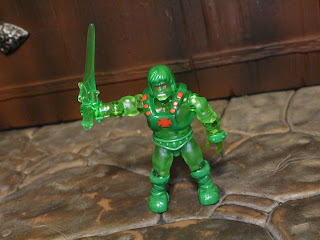 * Whether you call him Slime Pit He-Man or Horde Zombie He-Man, this translucent green He-Man figure is really, really cool. Translucent figures are almost always cool and when they're a bright color light green they're even better. He's wearing the standard He-Man garb of furry trunks with a belt, a harness, boots, and cuffs, but they're all in different shades of green. He's even carrying around a green Power Sword! 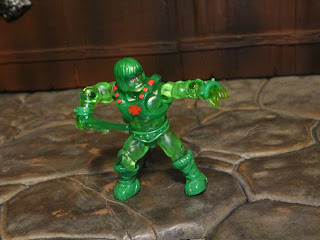 * Like the rest of the figures in this line Zombie He-Man is well articulated and ready for battle. These really are some of the nicest minifigures out there and they're incredibly fun to play around with. If you haven't picked up one yet and you're either a MOTU fan or a minifigure fan, you really need to give them a try. 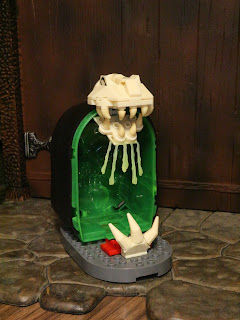 * This set really utilizes the Skeletor head to serve as the structure of the Slime Pit (or, as the packaging calls it, the Horde Pit). It's one of the simpler sets, really, with just a skull that fits on top of the set and a claw on the bottom. There's not anything extra here compared to the other sets, which usually had some extra accessories or scenery items. There's no stone background or Horde emblem, either, which is kind of odd on a set called the Horde Pit. You know that Hordak's all about the branding. 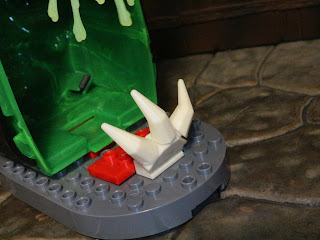 * Mega Construx' attempt at the claw which holds victims in place looks good except that it doesn't move and it doesn't really keep anyone in place. The vintage toy's claw held the figure being slimed against the back wall but here the figure just stands behind the claw. It feels a bit half finished. 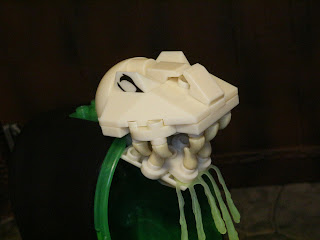 * The dinosaur skull that the slime pours out of is neat, though. It's made from multiple bricks (it's the most intensive build in this set) and has some cool printed eyes and fantastic teeth pieces used to bring this dead skull to....err, life, I guess. 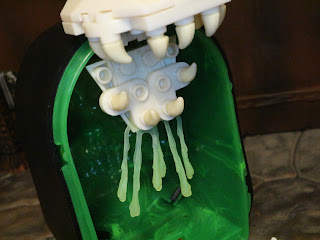 * The lower jaw is attached to a hinge and can lower down to drop the slime on the figures. It's not real slime, though; It's actually some strands of rubbery plastic that looks really cool. I always wanted Mattel to include slime like this in MOTUC or even Origins and it's nice to see Mega Construc utilize this. Some translucent green studs or something would have been cool, too. Perhaps just falling out of the mouth of the dinosaur skull? 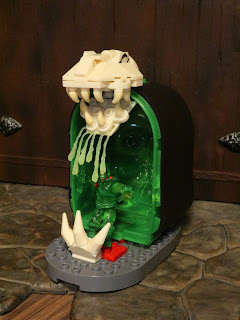 I'm a little disappointed with how the Horde Pit/ Slime Pit turned out but that still doesn't make this a bad set. The skull is really well done, especially the slimy tendrils dripping from the mouth, and Horde Zombie He-Man is an excellent minifigure. I just wish the base and the background had been a bit cooler. The Skeletor skull looks neat, though, definitely making this one of the best looking sets yet. There's still a good bit here for $10 dollars but maybe not as much as the other sets? This one still gets a Great and a 1/2 and is a fun little build with a cool figure. I'm not sure how these are showing up in stores as I ordered mine online. Are they showing up with other previously released sets in newly packed cases? Have you seen these in stores yet? I'm hoping this doesn't keep Mega Construx from releasing an actual Slime Pit playset in the future. That could be a great smaller set with some cool Horde figures included.
I've reviewed so many figures of He-Man and Skeletor that they have their own review archives. Check out Fabulous Secret Powers and Snake Mountain for more reviews.
So far the only other Slime Pit toy I've reviewed is the Slime Pit Multipack from Masters of the Universe: Eternia Minis.
For more Mega Construx Masters of the Universe reviews check out the following:
Battle Bones
Battle Cat Vs. Roton
Battle for Eternia Collection
Battle Ram
Castle Grayskull
Evil-Lyn (Mega Construx Heroes)
Evil-Lyn
Evil-Lyn (Series 2)
Faker
Fisto
Fisto & Cliff Climber
He-Man & Jet Sled
He-Man VS Beast Man
Land Shark
Man-At-Arms (Mega Construx Heroes)
Man-E-Faces
Moss Man
Panthor at Point Dread
Prince Adam
Roboto
Scare Glow
Scare Glow (Mega Construx Heroes)
Skeletor
Skeletor & Panthor
Stratos
Stratos (Mega Construx Heroes)
Stinkor
Teela
Trap Jaw
Trap Jaw & Laser Cannon
Tri-Klops
Wind Raider Attack
Zodac & Scubattack