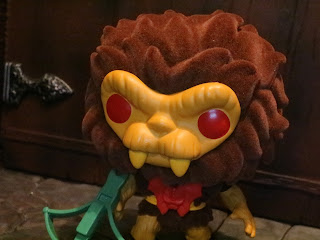 The flocked variant of Grizzlor #40 from POP! Retro Toys dropped on Funko Shop on December 21st, 2020 but they didn't ship out until 2021, so Grizzlor is another new review for 2021! Yes, I did review the standard Grizzlor earlier this week but this one is getting his own review since he's flocked! While the vintage Grizzlor wasn't flocked  but instead was covered with fur, the flocking really does a pretty nice job of selling the effect while still retaining the crispness of the sculpt. I've always loved Grizzlor and he's always been extra special to me because one of my uncles who died when I was in first grade (he was quite young and it was unexpected) bought him for me. It's funny how certain toys kind of connect your memories to certain people, places, or points in time, isn't it? I need to review my vintage Grizzlor at some point (I'm hoping to start back my themed Masters of the Universe months in February) but for now we'll check out the new POP! Retro Toys Grizzlor #40 (flocked) after the break... 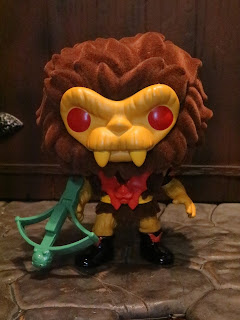 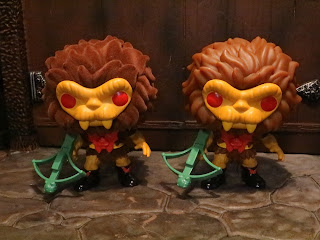 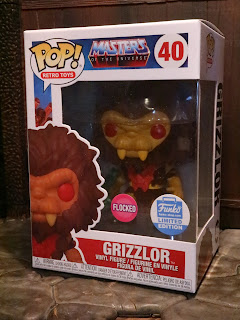 * I'm not going to show off the boxes for all of these but I did want to show off the packaging that has the POP! Retro Toys logo on top and the "Flocked" and "Funko Limited Edition" stickers on the window. 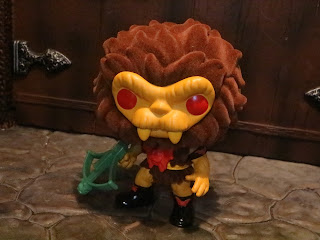 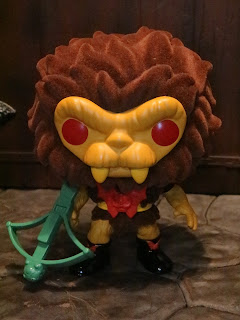 * Funko did a great job on Grizzlor's paint and fur! The flocked Grizzlor looks even better than the original as the flocking nicely complements the sculpted fur and really captures the look of the wild, woolly fur of the vintage toy. 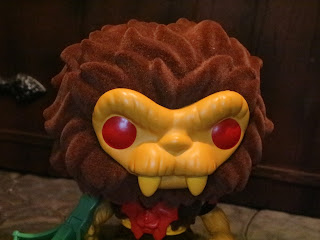 *  The headsculpt is excellent. You've got some seriously sinister eyes, a pronounced brow, some fiendish fangs, and, of course, his wild hair. There was a reason why folks told campfire stories about how terrifying Grizzlor was! 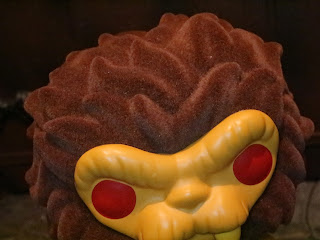 *  The flocking looks really nice on Grizzlor. It's smooth, an incredible dark brown, and it's very evenly applied. It definitely makes this the more desirable of the two Grizzlor POP! vinyls. 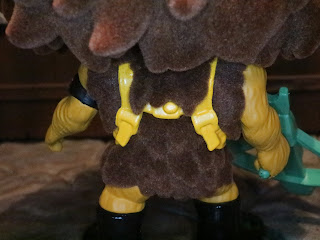 * On the back of the figure you can see the clasps of his Horde armor, covered with fur. This is another detail captured perfectly from the vintage toy and I love it! 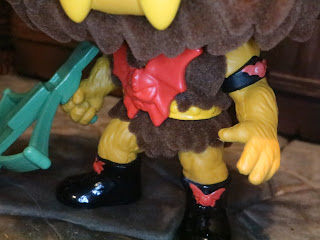 * Grizzlor is definitely showing his Horde pride! He's got a Horde emblem on his chest, an armband on his left bicep, and the Horde emblem on his boots. Hordak might be an evil space vampire demon wizard guy but he sure does know how to brand, doesn't he? 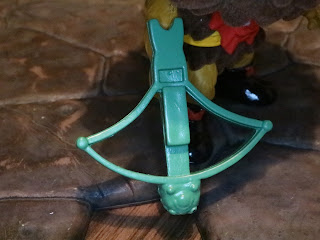 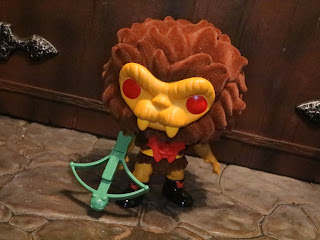 While the standard Grizzlor POP! is very, very good, this one is incredible. I'm going to go ahead and give him an Epic as this is one of my favorite POP! vinyls of the ones I own. The flocking on Grizzlor is just so cool and it really adds to his overall appearance. I like the darker colored fur, too. It really looks more like the vintage toy than the standard release. It's a shame this guy was an exclusive because every fan of the Evil Horde deserves to have a shot at this guy!

If you're a Grizzlor groupie then check out the alternate 200X Grizzlor head from the Heads of Eternia pack, the ReAction Grizzlor,  Grizzlor (Dark Variant), and Grizzlor (Toy Variant), the Grizzlor minifigure from the M.U.S.C.L.E. Trash Can Wave 4 (Slime), the POP! vinyl Grizzlor #40, and the Club Grayskull Grizzlor.

For more POP! Retro Toys vinyls check out the following:
Grizzlor #40 from Masters of the Universe