Toy Review: Battle Cat Vs. Roton from Masters of the Universe by Mega Construx 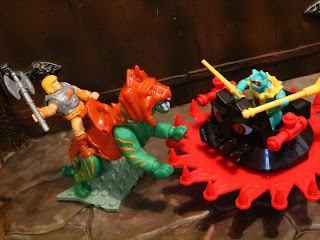 Power-Con 2020 was virtual this year due to the Covid-19 pandemic and while He-Fans and She-Ravers certainly missed the opportunity to gather together in person it was pretty cool to be able to take part in some great online panels. One of the best was the Mega Construx panel. The designers of the line are awesome and it seems like the Masters of the Universe Mega Conxtrux line is going to get better and better! I was excited to find one of the new sets a couple of weeks ago so today I'm going to check out the Battle Cat Vs. Roton set. My daughter and I built this a couple of days ago and while there's not a ton of building here (basically just the Roton) you do get quite a few items with the set. I'm always excited to see Battle Cat make his way into a MOTU line and the Roton has long been one of my favorite vehicles, so there's that too. Let's take a look at Battle Cat Vs. Roton after the break... 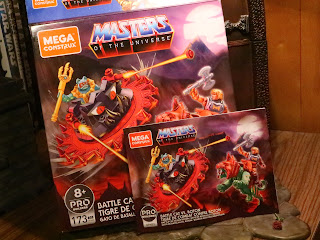 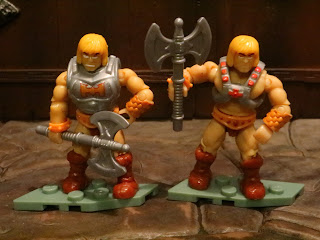 * There have been quite a few He-Man figures released in the Mega Construx line so far but this set offers up a new Battle-Armor He-Man (on the left). He's pretty similar to most other releases though his torso is silver and he has a separate armor piece that fits over his torso. On the right is the He-Man from the Wind Raider Attack set, just for reference. The base bodies and parts are the same. 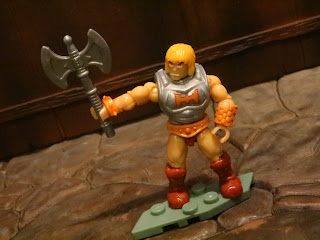 * I love Battle Armor He-Man! I've said it before in other reviews but I might even prefer him to the original He-Man. He looks fantastic with that silver armor and the stylized "H" logo. Mega Construx did a great job here as the armored chest plate adds some nice bulk to the figure while still looking like the vintage toy. He's also toting an ax, which is such a cool He-Man weapon. Easily the best He-Man variant in the line yet. 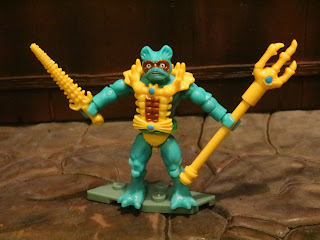 * Hey! A new character in Mega Construx! It's nice to finally have Mer-Man here and boy does he look fantastic. He really reminds me of a scaled down MOTUC figure, especially because of the detail on his armor. His staff and sword are really cool, particularly because of how sharp the sword actually looks. Mer-Man has the vintage styled head rather than the cross sell art/ modern head, but it works here. He's also a lighter shade of green which almost seems to guarantee we'll see a darker Mer-Man later on down the line. 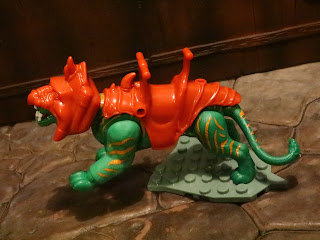 * Battle Cat! I love Battle Cat! He's been a part of nearly every MOTU toyline and his presence is always welcome. The Mega Construx Battle Cat is a fantastic, colorful toy that has a larger display stand. You can use it to pose Battle Cat standing on his hind legs with a little bit of effort, too. There's also a peg on his belly that could be used to attach him to a stand of some sort, though one isn't included. 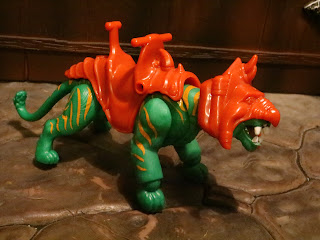 * Battle Cat is made of multiple parts and while the instruction manual shows steps to build him, he was mostly pre-assembled. His armor and helmet are separate pieces that easily snap over his body. He's nicely articulated, too, with quite a few balljoints and swivel/hinge joints. 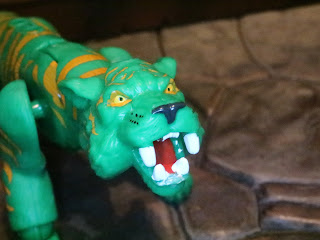 * Underneath his helmet Battle Cat has a fully painted face. I love his headsculpt! Mega Construx did show their idea for a Cringer figure at the 2020 Power-Con panel, so hopefully we'll see an actual Cringer at some point, too. This definitely works for me for now, though. I love the paintwork and the teeth! 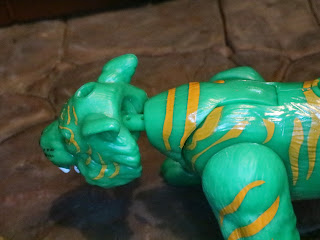 * Battle Cat has an awesome double balljointed head. It makes him very expressive although it does look kind of weird from the rear or the side. Maybe it should have just been a bit shorter? 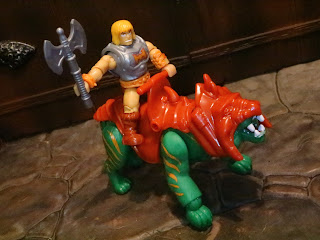 * Any character could ride Battle Cat but He-Man is certainly the most appropriate figure to pose on him, isn't he? The Mega Construx minifigures sit well on the saddle and there is a handle on the saddle that they can hold onto to keep them held tightly for play. 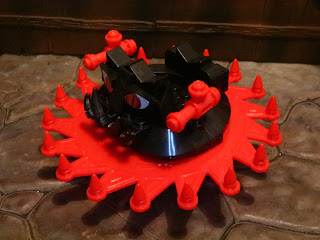 * I love the Roton! It's always been one of my favorite vintage vehicles and it's nice to see it in the Mega Construx line. Nearly all of the actual building for this set is due to the Roton. My daughter handled most of the build and it turned out great. It's nicely sized and holds one figure in the cockpit. The black and red color scheme is certainly eye catching and it stands out nicely from anything else seen in this line so far. 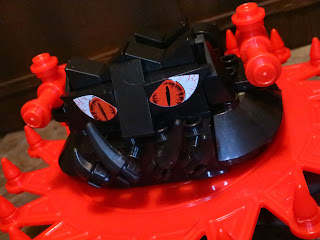 * The eyes of the Roton are printed bricks, so no stickers are needed. My daughter saw them in the package and made a big deal about how creepy they looked. When we dumped out the pieces we couldn't find the eyes for a few minutes. It actually wasn't until the instructions called for them that we realized that the eye prints were facing down on the table. The face is very cool and I love the use of the spikes for the teeth of the vehicle. 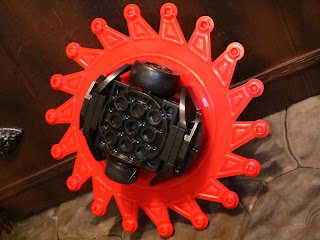 * The Roton has two wheels on the bottom: One is a smaller loose wheel that simply balances the vehicle and allows it to roll but the other is a larger rubbery wheel that both allows the vehicle to roll and causes the "saw blade" to spin. It works alright. Not perfectly but fairly admirable for something with no gears or batteries. Just the friction of the rubber wheel. 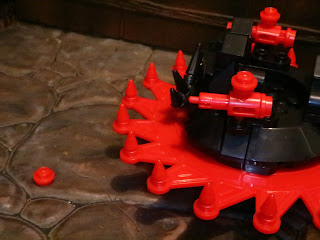 * The Roton's two laser cannons actually fire little plastic studs. I've seen similar devices on Lego sets but none that I've ever purchased. They shoot pretty well though you'll want to keep an eye on these as they're tiny. I'm surprised that toys have devices that shoot pieces that small! I guess the studs are so small they'd just go down your throat or through your nostrils and wouldn't get caught. Gnarly! 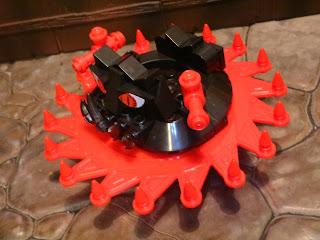 * The Roton is an excellent looking model. A clear stand would have been nice since the Roton is often portrayed as flying (which isn't how I imagined it moving as a kid). It looks great on the shelf and gets me more excited to see how the Mega Construx line continues to grow over the next few years. 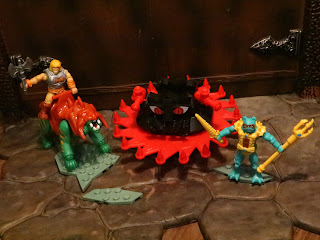 This set gives you a small vehicle, Battle Cat, and two figures, so it's not a bad haul. It might seem a little more expensive compared to some of the previous sets but you are getting three articulated figures here. The set is also on par with Lego pricing per piece if you're in to that sort of thing. Overall, I'm giving this one a Great. The Roton could maybe be a bit more solid but it still looks fantastic and the figures and Battle Cat are all excellent. This set is just starting to show up so be patient. Most of the Mega Construx stuff has been pretty easy to come by (other than Scareglow) and now most can be preordered, too.

If you're a fan of Mer-Man, the guy who made talking to fish cool, then check out my reviews of the M.U.S.C.L.E. standard Mer-Man and green Mer-Man figures, the Panosh Place Mer-Man Collectible Eraser, MOTU Colorforms Deluxe Play Set, the Monogram Mer-Man bag clip, the Loyal Subjects' Mer-Man, Super7's neo-vintage Mer-Man, the Mondo Exclusive Mer-Man, and the ReAction Mer-Man (Invisible) and Mer-Man (Carry Case Color).

If the Roton is your ride of choice also check out my review of the series 3 M.U.S.C.L.E. standard Roton and the orange Roton!