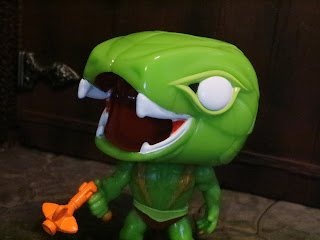 It's time to check out another of the new Masters of the Universe POP! vinyls from the POP! Retro Toys range and this time it's a member of both the Evil Warriors and the Snake Men: Kobra Khan! I like the variety of figures Funko is offering in the MOTU POP! range and it's exciting to get a figure of Kobra Khan, a character who doesn't show up in every Masters of the Universe product line. Originally released in the 1984 series, Kobra Khan stated off as an Evil Warrior but eventually found his way to the Snake Men where he had more of a connection. The vintage figure had a water spraying feature (the figure was essentially an action figure built around a small spray bottle!) and I know a good number of us probably kept Kobra Khan around to give us a quick drink when we got thirsty while playing with our MOTU toys. Funko's Kobra Khan doesn't spray water, obviously, but it's quite cool and a good replica of the vintage toy in a very stylized form. Let's check out Kobra Khan, also know as Khan of the Kobra Clan, after the break... 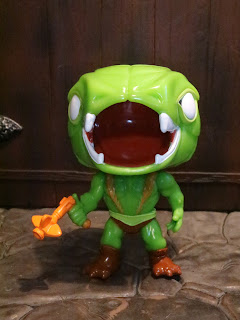 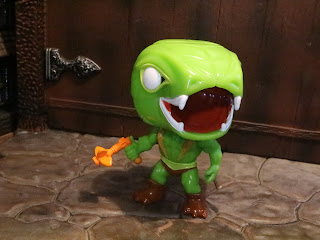 * Kobra Khan is standing in a fairly normal POP! vinyl stance though he does have his gun held out slightly. Since he's got a swivel head (like most every non Star Wars and Marvel POP!) you can pose him a bit. Funko POP! vinyls are always durable and colorful and look great on display. 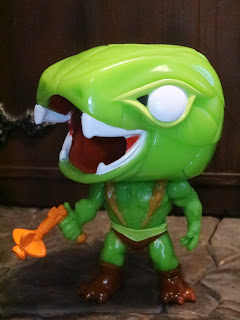 * Kobra Khan looks just like his vintage counterpart. I love the ridges and detail on his torso and the bright green chosen for him looks fantastic, too. He's quite eye-catching and should stand out regardless of which faction you display him with. 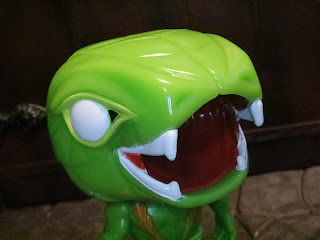 * Kobra Khan has one of the most unique headsculpts of any POP! vinyl I've ever seen. He doesn't look like a standard POP! partially because of the large white eyes on the sides of his head but also because of his massive open mouth. His mouth is hollowed out to replicate the look of the vintage toy (though it has a sprayer inside for his water spitting action feature). Khan's quite unique looking for sure. 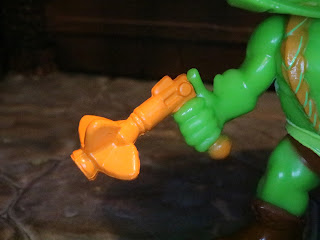 * MOTU was built on reuse and, like many of the other third series figures, Kobra Khan's weapon was reused from a previous release. The vintage toy had the same gun as Zodac and Funko has replicated it well here though they did give it more of an orangish look that matches Khan's color scheme nicely. 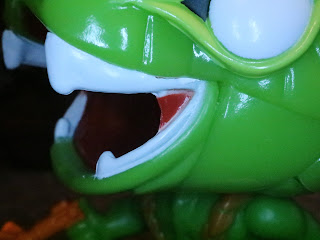 The Negatives:
* The paint on the side of Kobra Khan's mouth is kind of messy. There's a lot of slop where the red and the white meet. 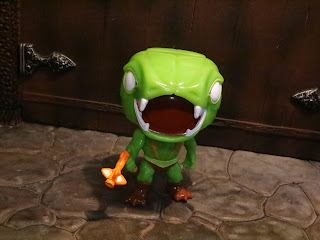