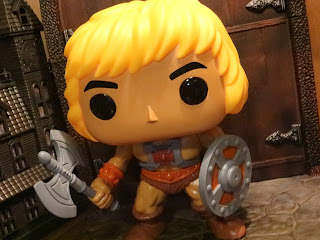 While January is usually spent finishing up my reviews of stuff I picked up in December I do work the new stuff released in there, too, and today I'm checking out another new Funko POP! Retro Toys release: The 10 inch jumbo sized He-Man #43 POP! vinyl. This is the fourth of the jumbo-sized Masters of the Universe POP! vinyls (they've also released two Skeletors and Beast Man) and, since he's a mass market release, you should have an easier time finding him. In fact, I've seen him on sale at a few e-tailers, so shop around a bit. He's quite cool and like most of the other recent Funko MOTU POP! vinyls he's clearly based on the vintage toyline rather than on the Filmation cartoon series. There really are some very recognizable differences between this version of He-Man and the previous releases that show how Funko really has some good attention to detail despite their toys having stylized, minimalist approach. Let's take a look at He-Man, the Most Powerful Man in the Universe, after the break... 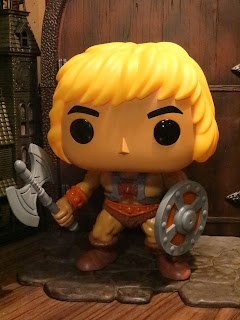 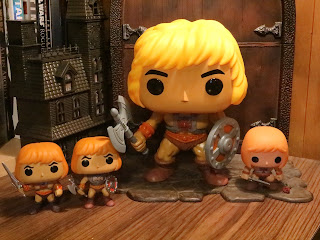 Comparison:
* Obviously you can tell which figure is the jumbo sized He-Man #43 but, from left to right, I've got He-Man #991, Battle Armor He-Man #562, and the 2013 He-Man #17. This new sculpt of He-Man is based on the vintage toy and doesn't use the head or body of any of these previous releases (he's the same sculpt as the POP! Pocket Keychain He-Man). 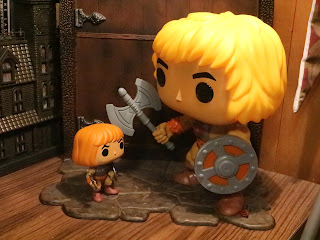 The Positives:
* The oversized POP! figures are really impressive. While they're only 10 inches tall, they feel so much larger due to how wide and chunky they are. They look fantastic on display and really have a lot of character. POP! vinyls aren't usually known for their sculpts but it's impressive how nice they look in this larger scale. The details just seem more interesting when they're this large. 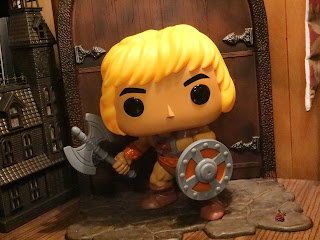 * Like most POP! vinyl figures, He-Man has an articulated head. That means you can fine tune his pose a bit. He's sculpted in a battle stance, just like the vintage toy, and if you turn his head to his left it looks like he's preparing to swing his ax with his shield providing defense. Its quite cool and he looks fantastic on display! 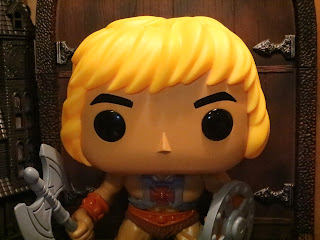 * The new He-Man headsculpt has hair inspired by the vintage toy's messy, windblown do. That's the biggest difference but it really does differentiate this version of He-Man from the Filmation version. 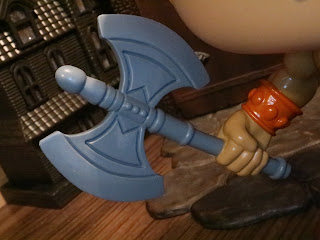 * Rather than his Power Sword, this vintage version of He-Man is toting his ax around. It's a beautiful rendition of the vintage accessory and the etched design on the blades is really quite nice. I love this accessory! 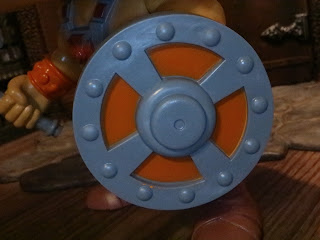 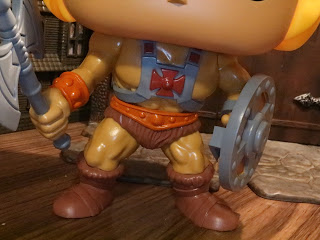 * The body is well designed and the paint colors seem spot on to what you'd expect from a He-Man toy based on the vintage figure. 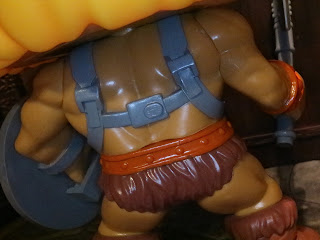 * I love the visible straps on the back. They're nonfunctional but they look like they would work just the same as the vintage toy. 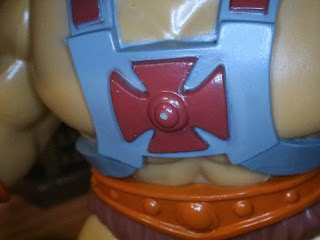 The Negatives:
* The center of He-Man's chest logo is kind of scraped off. That's a bummer. There's also some slop across the top of the harness. 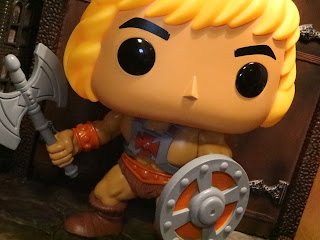 * My daughter was watching me take pictures of He-man and she pointed out that the head and body are two separate shades. I thought so, too, and her confirmation made me sure this wasn't just my eyes. His body is much more olive than his face, which is light tan face. The vintage He-Man definitely had a darker skin tone than most depictions of He-Man but it's odd that the colors on his head and body don't match here. I'm guessing the body is painted while the head is molded in the color of plastic used. 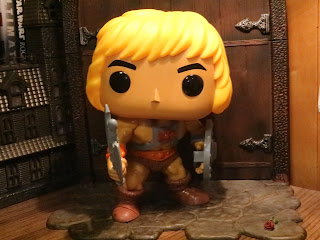 I really do like these oversized POP! vinyls and He-Man is a Great one. There are some paint issues but nothing that detracts too much from my enjoyment of the figure. It's cool to see some non-Mattel stuff based directly on the vintage toy (since other companies usually go with the Filmation look) and this guy turned out great. I really dig the hair, the ax, and the straps on the back of his outfit. For the price you're getting a pretty decent sized chunk of plastic that puts the other POP! vinyls to shame!
He-Man/ Prince Adam is one of my favorite characters and I've reviewed so many action figures and toys based on him that he has his own review archive. Check out Fabulous Secret Powers for an abundance of He-Man reviews!
For more POP! Retro Toys reviews check out the following:
Grizzlor #40 from Masters of the Universe
Grizzlor # 40 (Flocked) from Masters of the Universe