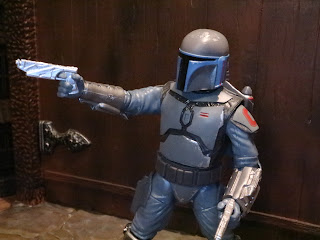 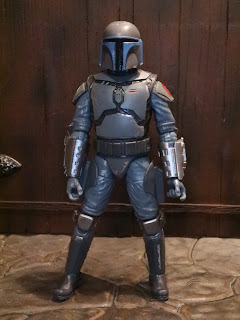 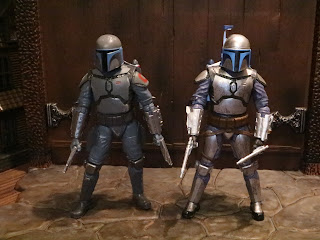 Comparison:
* The Mandalorian Loyalist is on the left while the Phase III Jango Fett is on the right. Overall, the Mandalorian uses most of Jango's mold, though Hasbro did give him new thighs, a new belt, and a new head. It's not bad at all and the guy does feel quite fresh and new. 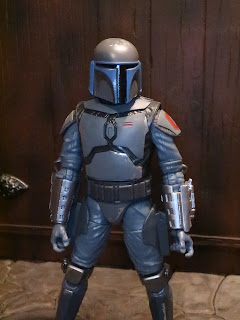 The Positives:
* The sculpt is still good (Hasbro's armored sculpts have always been quite good in this line) and the paintwork is what helps set this guy apart. Everything is super neat and clean, doing an admirable job of capturing the look of the Mandalorians from The Clone Wars. There's a nice mixture of paint colors here that really break up all of the different details of the armor. 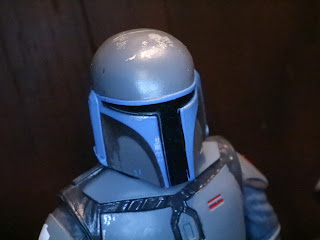 * The helmet is a new piece. It's not removable but it looks excellent with lots of battle damage and various scrapes and scuffs painted on. 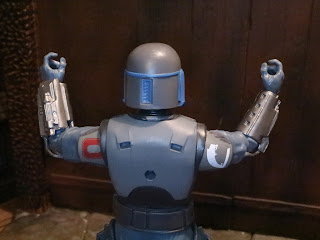 * The symbols on the Mandalorian Loyalists' shoulder pads are cool and, of course, he's also sporting the same slick vambraces as Jango. 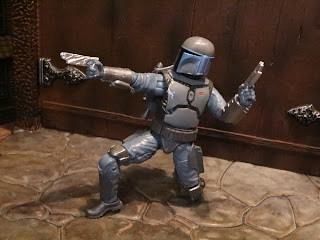 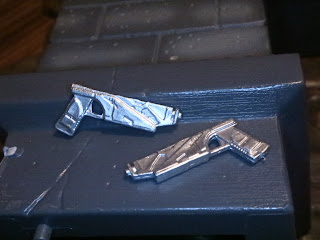 * The Mandalorian Loyalists carry dual Westar-35s (which are reused from Sabine Wren). They're slick and shiny! 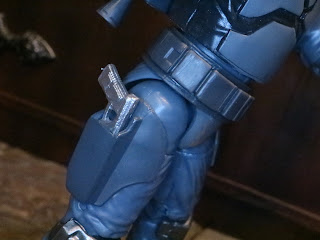 * The hips are new on the Mandalorian Loyalist and they both have holsters for the Westar-35s. The blasters slide in easily and stay in place securely. They're incredibly efficient! 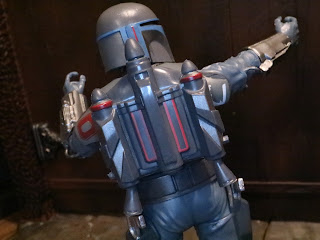 * The Mandalorian Loyalist sports a JT-12 jetpack with some cool paint details on it. It plugs into his back and stays on quite securely. 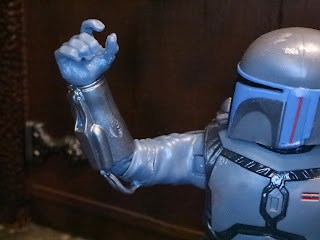 The Negatives:
*  My only real complaint with the figure, besides the abysmal availability, is that the range of the motion on the elbow is definitely not impressive. This is an older sculpt, though, and hopefully Hasbro will retool some new Mandalorian parts in the near future to craft more figures from The Clone Wars and more members of the Tribe. 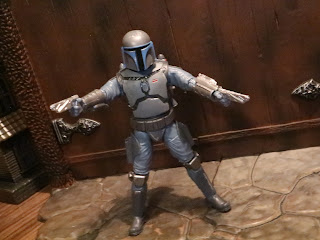 This guy is essentially a Black Series version of the 2010 Mandalorian Warrior and I loved that figure when it was released! This guy will fit in with the rest of your figures just fine and adds another army builder to the line that's not a Clone Trooper or Stormtrooper. It would have been nice to get more updates on this guy but he's still a pretty effective franken-figure. I'm giving the Mandalorian Loyalist a Great. It'd be nice if he were available everywhere and if he didn't have the exclusive tax added on but you shouldn't too much fault with the figure itself. It's nice to be building an army of Mandalorians in the Black Series, isn't it?
This is the first Mandalorian Loyalist I've reviewed on the site. For more figures from Star Wars: The Black Series Phase IV check out the following:
Admiral Ackbar
Ahsoka Tano (The Clone Wars)
The Armorer
Cad Bane
Clone Trooper (Holiday Edition)
Darth Vader
Din Djarin (The Mandalorian) & The Child
Garazeb "Zeb" Orrelios
Han Solo (Endor)
Imperial Stormtrooper
Incinerator Trooper
Luke Skywalker (Endor)
The Mandalorian
Phase I Clone Trooper
Princess Leia Organa
Range Trooper (Holiday Edition)
Sith Trooper (Holiday Edition)
Speeder Bike, Scout Trooper, & The Child
Teebo (Ewok)
Posted by Barbecue17 at 1/14/2021