Wrapping Up 2020: Kuiil from Star Wars: The Black Series Phase IV by Hasbro 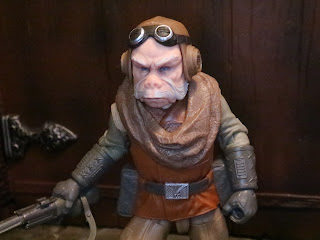 As I'm wrapping up my 2020 Star Wars: The Black Series reviews I'm checking out another of the figures inspired by The Mandalorian from the last series of 2020: Kuiil! I'm actually wearing a Kuiil t-shirt as I'm writing this (it was a Christmas gift from my wife and it has an image of Kuiil with the text "I have spoken") so I guess that's a pretty good sign that I'm pretty fond of the character. Kuiil is played by actress Misty Rosas but voiced by actor Nick Nolte and, together, they created what I believe is one of the most memorable characters not just from The Mandalorian but from Star Wars overall. Kuiil's not one of my top 10 characters or anything but he definitely makes an impact during season 1 and helps set the tone for the series. It was really cool to see an Ugnaught in live action outside of Cloud City, too. Let's take a look at the guy who says what he means and says it directly, after the break... 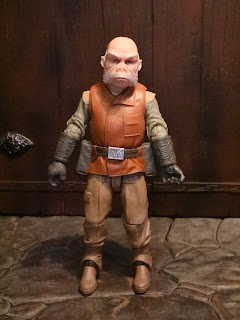 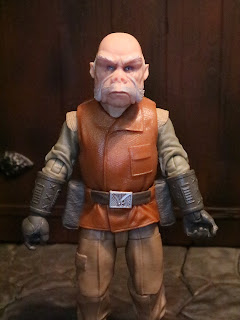 * Kuiil's a moisture farmer on Arvala-7 and thus he wears clothes suited for the rough, rugged life on the planet. That means multiple layers, lots of earth tones, and plenty of places to carry important stuff. Kuiil looks excellent with clean paintwork, multiple different textures on his various clothing pieces, and little details like his cool belt buckle and the pouches on his belt. There are some paint applications that seem missing (straps on his bracers and on the clips on his sleeves) but overall he definitely matches the character from the show quite nicely. 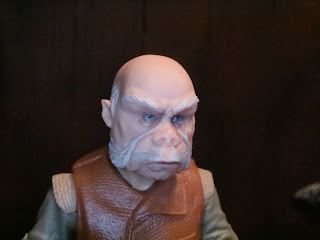 * Kuiil's the first Ugnaught we've seen in the Black Series (surely we'll get one of the ones working on Cloud City at some point) and Hasbro did a fantastic job with his porcine features and stylish facial hair. The eyes are very piercing and soulful, too. You can just hear Kuiil's voice sharing his terse words of wisdom. 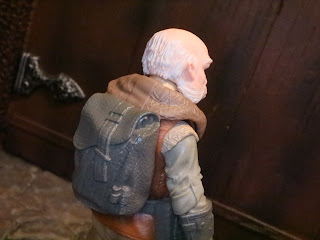 * Kuiil has a removable backpack that is attached to the scarf he wears. You just have to pop off his ball jointed head to take it on and off. It's a nice sculpt and makes him feel a bit more substantial since he doesn't come with a blurrg. 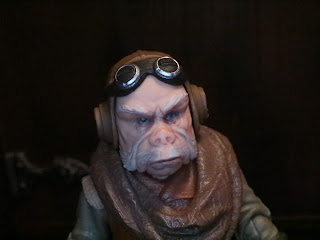 * Kuiil also has a removable pilot's hood with goggles. He comes wearing it in the package and you might not even realize it's a removable piece as the fit is so snug. It looks great on him, really completing his look. 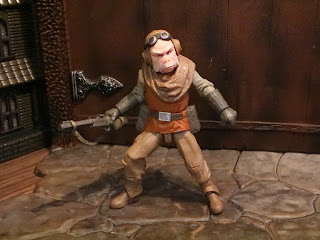 * Quill has all of the articulation of a standard Black Series figure but since he's a bit smaller he's missing the lateral shoulder hinges. He still moves quite nicely, though, and you should be able to get some decent poses out of him. He's really quite expressive. Of course, being a Black Series figure, he feels quite sturdy and very well made. 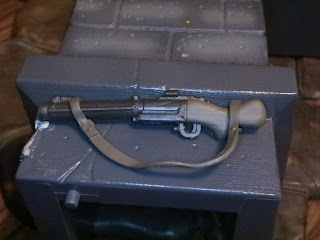 * Kuiil's blaster kind of looks like a smaller M-79 grenade launcher. It's got a few paint apps to show off the wooden stock and it has a strap that you can remove with a bit off effort. 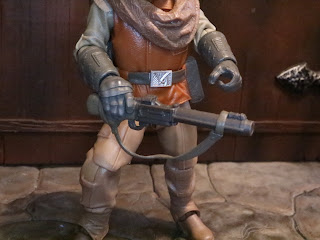 * The blaster has a thicker handle and it's kind of tough for Kuiil to hold it convincingly. He can hold it casually but it's tough to make him look like he's actually firing it. 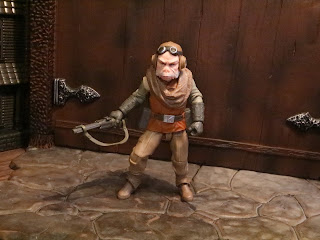 * Kuiil's another Great Star Wars: The Black Series figure. He's a solid portrayal of the character and I imagine he'll be quite popular. He's got a nice complement of accessories and a fantastic headsculpt that really captures the essence of the character. He doesn't have a blurrg, though, which would have made for a nice 2-pack, but I think you'll still like him. He trickled out at the end of 2020 with the rest of the latest series but he's now starting to show up more. And I can't think of a better way to end this review but to say, "I have spoken."
This is the first figure of Kuiil I've reviewed. For more reviews from Star Wars: The Black Series Phase IV check out the following:
332nd Ahsoka's Clone Trooper
Admiral Ackbar
Ahsoka Tano (The Clone Wars)
The Armorer
Cad Bane
Clone Trooper (Holiday Edition)
Darth Vader
Din Djarin (The Mandalorian) & The Child
Garazeb "Zeb" Orrelios
Greef Karga
Han Solo (Endor)
Imperial Stormtrooper
Incinerator Trooper
Jar Jar Binks
Luke Skywalker (Endor)
The Mandalorian
Mandalorian Loyalist
Mandalorian Super Commando
Phase I Clone Trooper
Phase I Clone Trooper Lieutenant
Princess Leia Organa (Endor)
Range Trooper (Holiday Edition)
Remnant Stormtrooper
Rey (Dark Side Vision)
Sith Trooper (Holiday Edition)
Speeder Bike, Scout Trooper, & The Child
Teebo (Ewok)