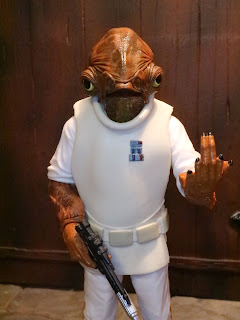 Back in 2017 Hasbro released a 2-pack of Admiral Ackbar and a First Order Officer as a Toys R Us exclusive based on the then upcoming The Last Jedi. It's been about three years but Hasbro has finally decided to give us a Return of the Jedi version of Admiral Ackbar (perhaps my favorite Star Wars character) in Star Wars: The Black Series Phase IV. Yes, we've now entered Phase IV of the Black Series. Phase I hit in early 2013 with the black and orange boxes followed by Phase II in mid 2014 with the black and blue boxes and Phase III in 2015 on Force Friday with black and red boxes which lasted through the Sequel Trilogy. Unlike the previous phases, Phases IV actually has unique packaging colors based on where the character is from (movie, cartoon series, etc.) This is clearly Admiral Gial Ackbar's most iconic look and it's a figure I've been waiting for since the line began. Ready for a look at one of the greatest Rebel heroes of them all? Then join me after the break... 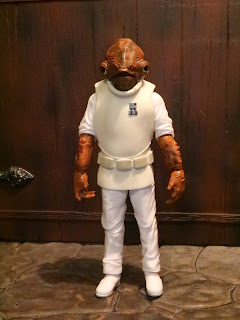 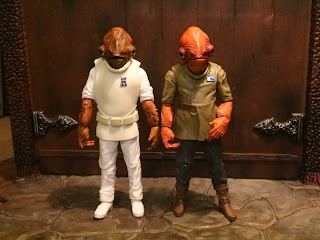 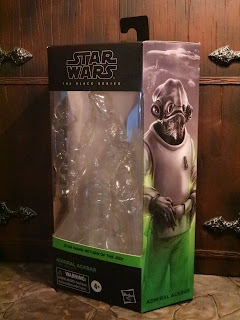 * Since this is the first Phase IV figure I'm reviewing I'll go ahead and show off the packaging. The green stripe across the front that bleeds into the angled image on the side denotes this as a figure hailing from Return of the Jedi. It's kind of cool that each piece of media gets a different color. It makes the packages look pretty interesting on the shelf, too. 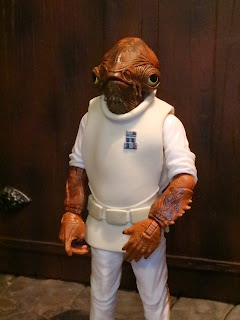 * Overall, Admiral Ackbar is a striking figure that looks just about how I expected he would. Ackbar's outfit is simple with plain colors, but its also very dignified and rendered quite well here. His Admiral's plate on his chest is nicely detailed and helps reinforce that Ackbar is the man in charge. 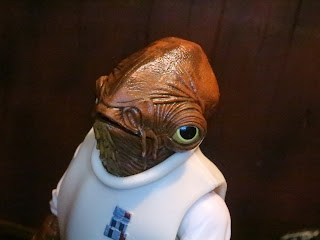 * Admiral Ackbar has a fantastic headsculpt. The headsculpt might be a bit darker than it needs to be but the paintwork looks excellent and the "shininess" of his skin definitely helps to offset that. The details, particularly his eyes, look very realistic. 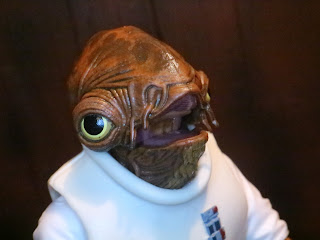 * Like the previous Ackbar, this version also has an opening mouth. You supply the "It's a trap!" quote and Ackbar supplies the opening mouth. Slick! 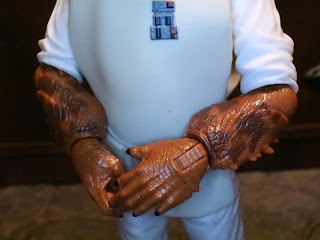 * Ackbar has the same arms as the previous figure but the paintwork is better this time. There's more of a mottled appearance showing off all of his fishy colors. 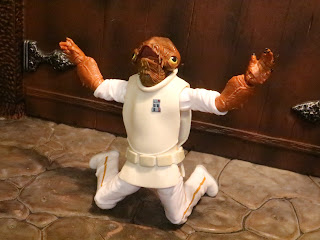 * Ackbar is quite well articulated. While his head doesn't move side to side (probably to accomodate the opening jaw) and his mid-torso is hidden under his tunic, he's overall pretty mobile. Ackbar doesn't typically do much in ROTJ but he can definitely do most poses you'd want. He has the newer "butterfly" shoulder hinges as well. 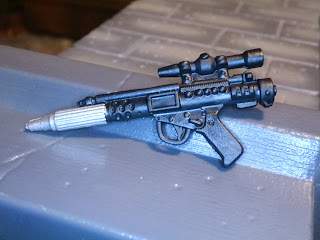 * Admiral Ackbar comes with a DH-17 blaster pistol, the blaster which so many characters seem to come with. Rebels, Imperials, whomever: When they're not really shown with a blaster in the films you give them a DH-17. Ackbar holds in firmly in his right hand and, due to his "butterfly" hinged shoulders, he can hold it with both hands, too. 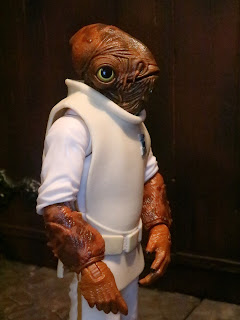 * I love the idea of Admiral Ackbar's tunic being a separate piece but there's something about the execution of it that seems a bit off. I feel like the collar tends to creep up on Ackbar, causing his neck to look too short. 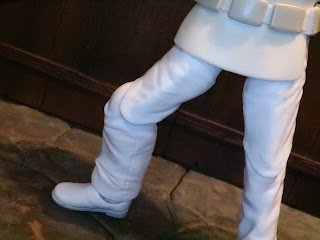 * Admiral Ackbar has swivel/hinge knees with a great range of motion but, gosh, the look so awkward. Hasbro seems to be trying to hide the join but in doing so they made the knees look even worse and more noticeable when poses in anything but a plain, vanilla stance. 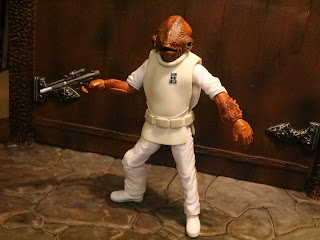 I have to admit that I'm a bit underwhelmed by Admiral Ackbar. He's possibly my favorite Star Wars character so I was super excited for him but some of the design decisions are a bit off putting. Also, couldn't Hasbro have given him the baton that the vintage figure and a couple others have come with? That seems more fitting than the blaster. He could have come with both, really. I like the figure but I had really high hopes that he'd impress like a mad Mon Calalamri kamikaze, but he's really kind of a cold fish. He's not a trap by any means, though. Just Good and a 1/2, really.

While he's possibly my favorite Star Wars character I haven't reviewed too many Admiral Ackbar figures. I've also checked out the Black Series 2-pack of Admiral Ackbar and a First Order Officer from The Last Jedi and the Hero Mashers Admiral Ackbar.