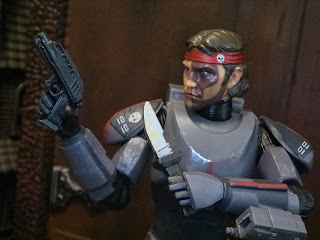 I'm a few episodes behind on The Bad Batch but I am absolutely loving it. Who knew that we needed a mash-up of The Clone Wars and the A-Team/ The Dirty Dozen? I've admittedly been left cold by Sequel Trilogy but there's been so much other incredible Star Wars stuff that I can just ignore that area of the Star Wars galaxy for now and focus on the stuff that's been outright amazing. While the figures have been tough to find and they haven't released all of the crew yet Hasbro did do a pretty good job of getting some of the Bad Batch figures out right as the show was kicking off. Today I'm checking out Hunter, the only Bad Batch figure I've picked up so far. Hunter is the leader of Clone Force 99 and is augmented with enhanced senses. Allegedly based on the design of Billy from Predator there definitely seems to be some inspiration from John Rambo in Hunter's design as well. He's probably my second favorite member of the team (Wrecker is hard not to love) and I was thrilled to get him in hand. Let's take a look at Hunter after the break... 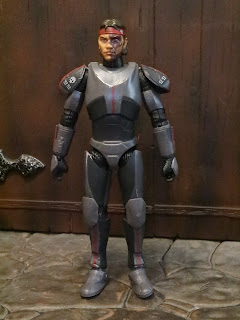 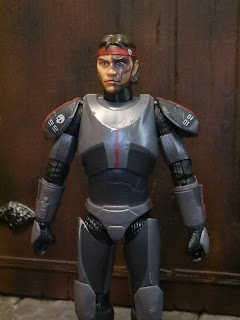 The Positives:
* Hunter wears Katarn-class commando armor painted in gray and black with some red highlights. It's awesome looking and really helps him stand out from the standard Clone Troopers who tend to wear white armor with colorful highlights. His pauldrons are attached at the shoulder joint and can swivel independently to help improve the articulation. They're also decked out with lots of battle damage and some little details that are surely significant to Hunter and the rest of the team. 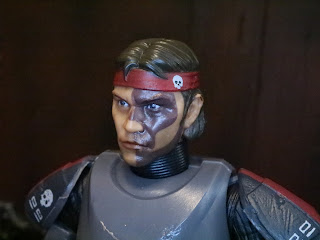 * This headsculpt is incredible. It's honestly one of the best I've seen in the Black Series, a line that's been known for very strong headsculpts over the past few years. Like other figures based on animated and comic sources, Hunter has been designed to look as if he were a live-action character played by a real actor. Here you can see the Temuera Morrison likeness although Hunter is sporting an awesome head of hair and a really cool facial tattoo. He's also sporting a headband with a little skull on it. Seriously, this is just so insanely impressive. 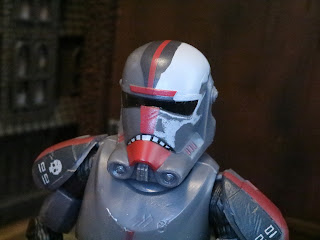 * Hunter's helmet is pretty awesome, too. Great paint job with a really detailed design and a solid sculpt. it fits on nice and tight and doesn't look oversized. 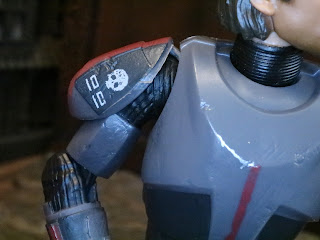 * Can you see how detailed the armor is? There are little nicks and dents everywhere. Hunter has surely seen some things, man. 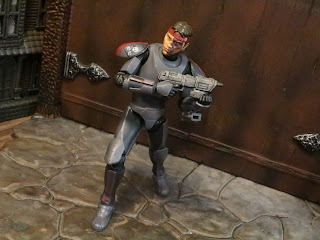 * The articulation is awesome. It's pretty standard for the Black Series with a great range of motion. He's durable, sturdy, and ready for whatever you need him to do. Hunter doesn't have the "butterfly" shoulders oddly enough but he can still hold his weapon with two hands most of the time, so it's not a huge issue. 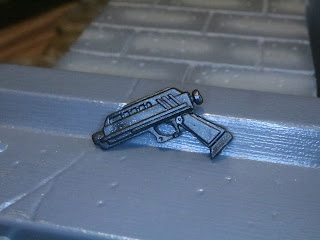 * Hunter is equipped with two blasters, the first of which is the DC-17 hand blaster. It's a simple, reliable, and effective blaster pistol favored by Clones in need of a close quarters weapon. The sculpt is great and Hunter can hold it quite well. 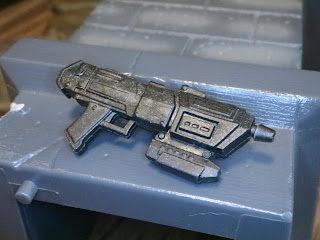 * Hunter's second weapon is a DC-17m Interchangeable Weapon System/ Repeating Blaster Rifle, a weapon created for the video game Star Wars: Republic Commando. In the game the weapon could be converted for multiple functions (sniper rifle, grenade launcher) though I think in The Clone Wars and The Bad Batch we just see it used like a standard blaster. It's a sweet looking blaster, though, and I think it's a sculpt we haven't seen before. 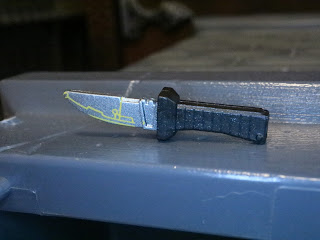 * Hunter's favorite toy seems to be his vibro-knife. This is a good sculpt but the coolest part is the paintwork, especially on the blade. Look at those yellow energy trails! That's a really nice detail that could have easily been forgotten. 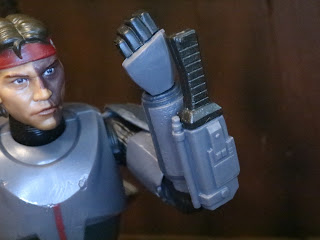 * Need a place to store such a lethal weapon? How about this super cool sheathe right on Hunter's forearm? the vibro-knife slips right in and stays firmly in place. 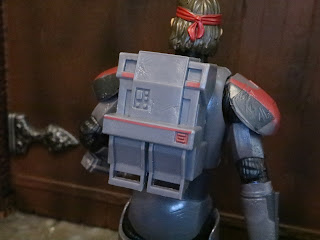 * Last up is this heavy duty backpack. There aren't any special features or anything on it but it's a great piece that completes Hunter's armored up and geared up appearance. There are more lights on it on the show but leaving them off may have been part of adhering to the more real world aesthetic. 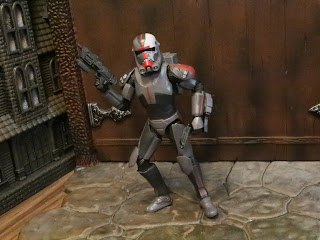 Hunter is another incredible figure in the Black Series. Seriously, Hasbro is releasing some Epic figures in this and Hunter is another Epic one for sure. Great sculpt, great paint, and killer accessories makes Hunter one of the best of the year so far. I'm hoping the rest of the Bad Batch turns out just as well as this guy! I haven't found Crosshairs yet and Wrecker is just starting to trickle out but I have high hopes that this team will be an incredible grouping once completed. I've seen Hunter once or twice so far and hopefully you'll be able to track him down, too.