Wrapping up 2020: Phase I Clone Trooper from Star Wars: The Black Series Phase IV by Hasbro 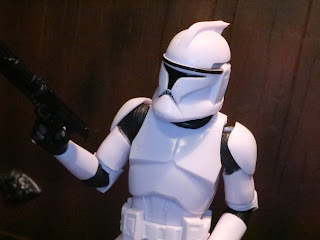 This intro might get a bit confusing as this figure is technically called a Phase I Clone Trooper, which refers to the Clone Troopers from Episode II: Attack of the Clones with the sleeker helmet designs with a more pronounced fin on top. Of course, the Black Series toyline itself has also used the label "Phase" to refer to the different iterations of the line. In mid-2020 Hasbro transitioned the Black Series into Phase IV with new packaging. Make sense? OK, good! Like the recently released Imperial Stormtrooper figure, the Phase I Clone Trooper is another figure from Phase I of the Black Series that Hasbro has completely created a new version of for Phase IV. The Black Series has really evolved over the past few years and it's nice to get some new and improved base bodies for troop builders who we know we'll see repainted and re-released multiple times. I never reviewed the original release of this guy from 2014 although I've reviewed multiple repaints of the original figure. Clone Troopers are a staple of the Star Wars galaxy now and it's actually nice that Hasbro went back to the drawing board to improve this guy. Let's take a look at the Phase I Clone Trooper after the break... 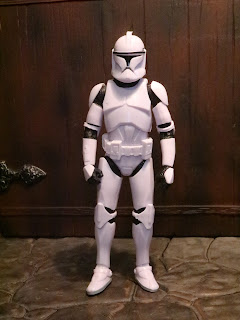 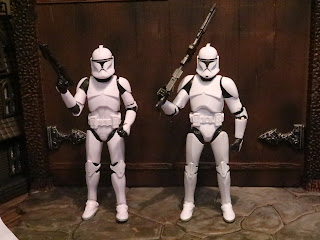 Comparison:
* The new Phase IV version of the Phase I Clone Trooper is on the left while the Phase I Clone Trooper release from 2014 is on the right. While the both look very similar they're completely new sculpts. The new version has brighter armor, updated articulation, sharper detail, flexible shoulder, elbow, and knee pads, and a more realistically sized helmet. Of course, they're so similar in appearance that adding these guys to your existing army shouldn't make them look out of place or anything, either, so that's nice. 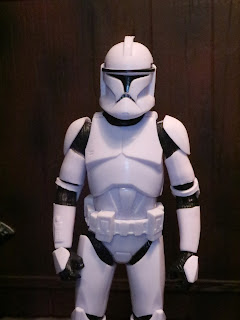 * Well, this is a Phase I Clone Trooper alright. It's hard to find a lot new to say about this guy although the new sculpt does look fantastic. The white armor does look a bit brighter and the details are all a good bit crisper. 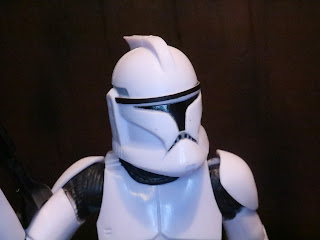 * The new bucket for the Phase I Clone Trooper has been resized so that an actual Black Series scaled head could fit inside. There's actually an unpainted clone head inside although the helmet is glued on. I'm sure we'll see the unmasked at some point. I've heard a few folks say that they think the new helmet has a bit of an animated appearance to it and I won't deny it. It still looks pretty movie accurate, though, and I like the decision to scale it properly as if an actual head were inside the helmet. 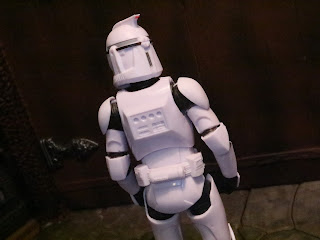 * The back of the figure doesn't look much different than the previous release although all of the details are, again, much crisper and sharper. 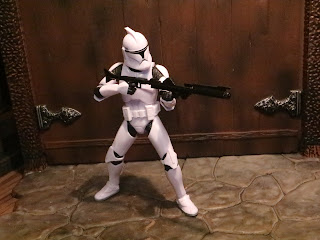 * The articulation is the biggest area where you'll really appreciate this new figure. The previous articulation system has been replaced. Now we have swivel/ hinge joints with a great range of motion, more solid feeling plastic, lateral shoulder joints, and a more articulated head and neck. This guy is a ton of fun to play around with and he's sturdy and well made. Bravo! 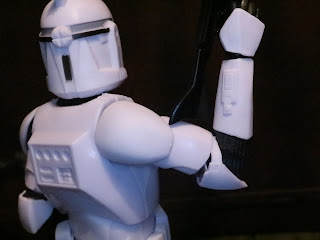 * Hasbro gave the Clone Trooper flexible shoulder pads, elbow pads, and knee pads. They look really cool and move with the articulation, keeping anything restrictive on the armor to a minimum. 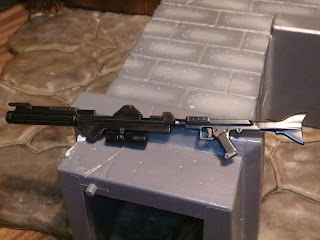 * The Clone Trooper comes with the same two blasters almost every other previous Clone has come with: The DC-15A and the DC-15S. The DC-15A is the same as the previous molds and still looks just fine. 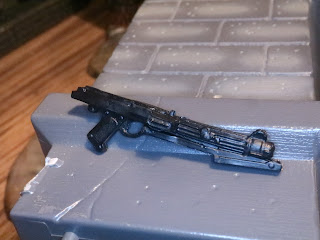 * The same goes for the DC-15S. It's a good sculpt, the figure holds it well, and it gives your Clone another blaster. Nice! 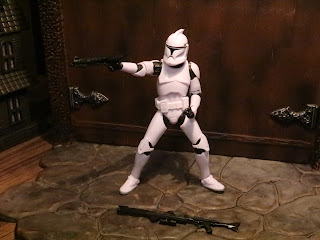 While there are still dozens upon dozens of unmade figures in The Black Series overall I can't blame Hasbro for offering up new versions of the troop builders. Hasbro can always throw Clone Troopers into the line for a fun repaint that most collectors want so it's nice to get an improved, modern update of the base body. This guy is really well done and I think he's definitely deserving of an Epic rating. He's an incredibly well articulated figure and he manages to be new and exciting while still fitting in with your existing clone army. That's a real victory in my opinion.