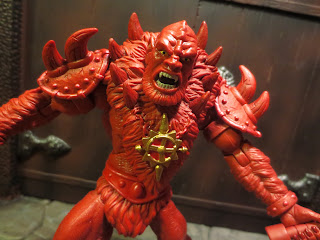 Just a few weeks ago (June 4th and 5th) Power-Con was held in Los Angeles, California. The convention has been held a few times now (it's been a bit sporadic, having skipped a year and having been canceled once) and at one time tried to bring in a larger audience by also focusing on the Thundercats and the Teenage Mutant Ninja Turtles. It's a Masters of the Universe convention at heart, though, and that seems to be what still draws the fans in. I've yet to be able to attend Power-Con but I'm glad they made their exclusives so easily available for fans. And I'm actually pretty happy that they had exclusives! I'm not a big fan of exclusives as a general rule but Power-Con picked characters that would only be of interest to a pretty niche crowd and allowed even non-attendees to purchase them and have them shipped for a small fee. Today I'm looking at the first convention exclusive: Beast-Man, Blood-Red Henchman. Also referred to as Red Beast (an early name for the character when he was being considered  for the role of the main villain in the line), this Beast Man repaint is based on how the character appeared on cross-sell art that appeared on the backs of some products and the minicomics. Since Beast Man was a character that hadn't received any variants in Masters of the Universe Classics and this variant was definitely known by the more dedicated fans, he made a great exclusive. Ready for a look at the blood-red Beast Man? Then join me after the break... 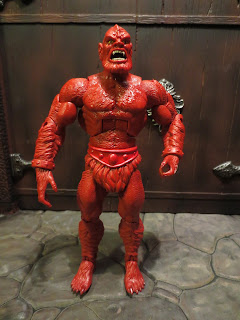 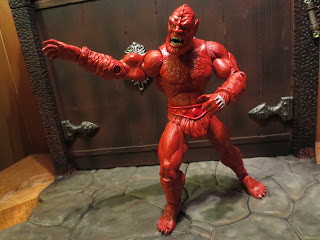 * Beast Man was the second basic figure appearing in the line (not counting the King Grayskull SDCC exclusives) so by now this articulation model is showing it's age. It's still really fun and durable, though, and the joints are nice and tight. It's not as good as some of what's available on other action figures but it's better than most and will fit in nicely with the dozens upon dozens of MOTUC figures you probably already own. 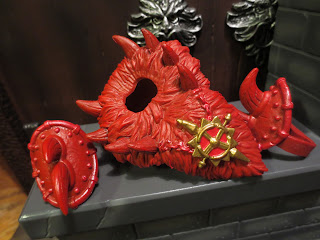 * Beast Man comes with all three pieces of armor and they still look great. I love the red color chosen for them, particularly the darker red and the wash used on the spiked pads. These look really, really sinister on this guy. By the way, want to know why this Beast Man is red? According to the bio on the back of the card red is Beast-Man's original color. Over the years his fur has lightened to the current orange color we're most familiar with. Feel free to share that on "Today I Learned." 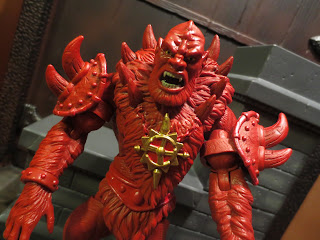 * This guy still looks good, doesn't he? The Four Horsemen did such a great job on these figures and I think that the artistry displayed will truly stand the test of time. Like the 200x Masters of the Universe figures, while time has passed their articulation and construction by, they toys still look incredible. That's how I feel about MOTUC: I think they're always going to look pretty impressive. 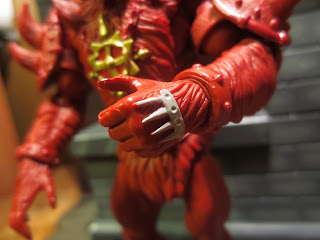 * I love that Beast-Man's claw is painted! Even the vintage figure had this cool little claw detail on his left hand but it's cool to see it stand out here. I love it! I've always imagined it's some kind of primitive tool that Beast Man coats with various poisons before he fights. 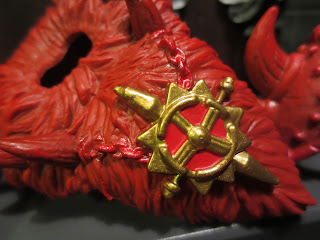 * The gold medallion Beast Man wears is not only nicely painted bu there's a metallic red chain present, too! It's a cool little visual detail that's easy to miss. I wish that metallic red paint had been used in a few more places! *If I'm going to be a bit critical about something on this figure, it's that he's red. Too red. I don't mind that he's red (that's kind of the point) but he has so much red on him that it gets a bit difficult to see the subtle variations present. As it stands, everything tends to blend together in person which is a bit disappointing as it makes the figure lose some of it's visual edge. 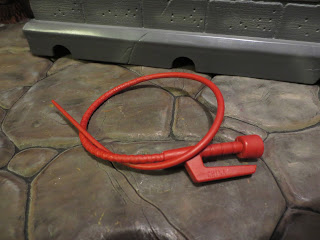 * Beast Man comes with a whip (he's into Devo) and it's the same whip the original MOTUC release came with but this time molded in red plastic. I like the accessory itself but doesn't a red accessory seem like it adds to the red overkill on this figure? I really think black would have looked fine. Or golden yellow. Something different would have broken things up nicely! 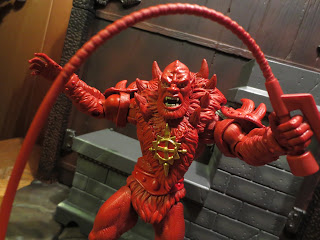 Here's the deal: This guy is a repaint aimed at a very specific section of the MOTUC fandom. Not everyone wants a red Beast Man, and that's OK! If you do, though, I think you'll be pleased. The figure is still as good as it has ever been although the amount of unvaried red here is a bit of an overkill. I do wish the colors separated a bit more. This guy is now probably one of the rarest MOTUC figures ever, so if you want him you'll probably have to act fast as he may just tend to rise in price. Red Beast is a Good and a 1/2 figure and while he's not the most dynamic MOTUC figure released, he's still pretty fun.

The only other Beast Man figure I've reviewed on here is from one of the Super 7 M.O.T.U.S.C.L.E. packs from last year. I've released plenty of other Masters of the Universe Classics figures, though, including: