Action Figure Review: Saurod from Masters of the Universe Classics by Mattel 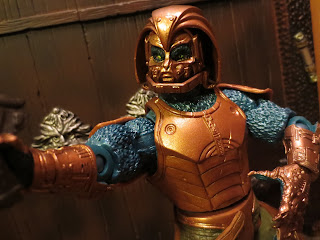 I'm absolutely amazed! Not only is Saurod an amazing figure (and one of my favorites from the vintage line) but he completes both the Masters of the Universe movie sub-set and the unique Evil Warriors). That's right! So long as we're not counting the two upcoming Skeletor variants, Saurod is the final Evil Warrior. We have all of them! What a victory! Anyways, I just had to mention that before diving in to talk about Saurod himself. While he really doesn't have much of a role in the movie, Saurod makes up for that by having the coolest costume and by having had a vintage figure. Played by Pons Maar (who sounds like a Star Wars character) who gives the character an excellent, lizard-like quality in his motions, Saurod is an awesome lizard bounty hunter who gets vaporized by Skeletor. While fans might forever wonder how Saurod made the cut for inclusion in the vintage line ahead of Karg, I'm still glad we have the guy! Ready for a closer look at the new MOTUC version of Saurod? Then join me after the break... 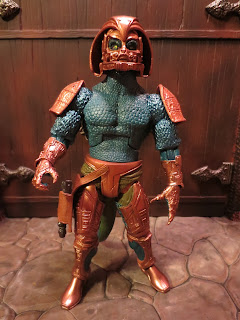 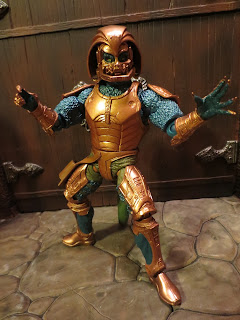 * Like nearly every other MOTUC figure released over the past year or two, Saurod feels very solid and durable. He has a good range of motion in most of his joints and there's nothing about the figure that feels fragile or breakable. These figures are absolutely made to be posed and played with! 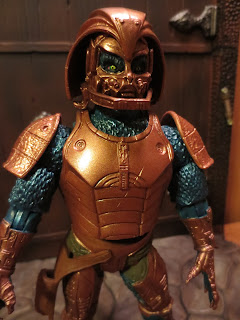 * Saurod is one of the most impressive sculpts seen in this line. His head sculpt is easily of the quality that I expect to see from a company like NECA when they're doing their best work. The paint on the eyes is amazing! There was truly nothing held back here. There really is very little reuse as well; the only thing that seems reused is his torso. Of course, that's covered by the armor that has lots of little details and some great dents and dings in it. There really is some great texturing on the various pieces of armor to show off the wide variety of materials utilized. 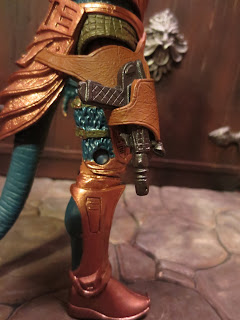 * I love Saurod's pistol. It's a very cool, understated little weapon that I imagine packs a lot more punch than one might expect. Saurod has a leather holster on his right hip which the pistol can slip inside. It's a tight fit but it does look incredibly cool. 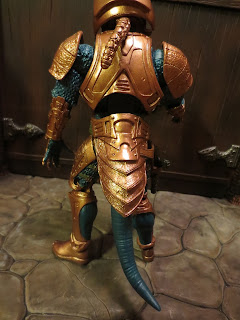 * Guess what? When you turn Saurod you get even more detail. His tail and the armor covering it is really cool as is the odd ponytail thing hanging down from his helmet. Saurod is really just a fun figure to stare at as their are many little details that are fun to discover. 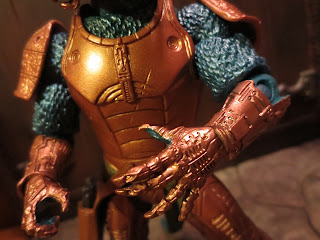 *While Saurod's armor is incredibly detailed, I really wish that Mattel had given the figure a darker wash to help bring out the smaller details. It really would have taken things to the next level. 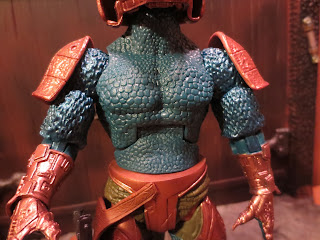 * Saurod is wearing a fairly complex and layered outfit. It's clear that he has on bronze armor but what might not stick out at first is that he is wearing some bluish green chain-mail armor over his green torso. It's a bit tough to tell the difference at first glance. Maybe differentiating these two colors a bit more would have been a good idea? 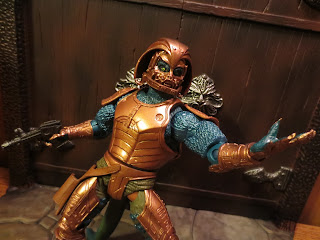 I have one major complaint about Saurod: Why doesn't he shoot sparks? Even though he did nothing of the sort in the movie, the vintage toy shot sparks from his mouth. Obviously MOTUC doesn't really utilize action features but I would have loved to have seen a spark effect that could have fit over Saurod's helmet or something. Gwildor got a toy version of the Cosmic Key, Blade got his movie and vintage toy sword, and Saurod should have gotten his sparks. Still, this guy is an amazing toy and he gets a Great and a 1/2 rating from me. I'd love it if more characters from the movie got released in the future but, if we never get anyone else, I'm happy that we got what we got.