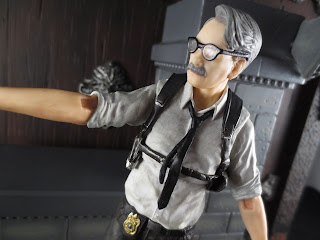 I thought the first series of Arkham Knight figures was pretty incredible. I kind of held off on picking up series 2 because they released so close to Christmas but I started picking them up here and there a few weeks ago. While I may be holding off on Nightwing and Robin, I grabbed Catwoman and now I'm looking at Commissioner Gordon. Gordon has been a mainstay in the Arkham-verse games but this is the first time he's received an action figure and I have to say that it's about time. You can probably count the number of figures based on James Gordon on both hands but lately he's been getting more attention. He appeared in the Greg Capullo based line in 2014 and later this year he's going to make an appearance in the Batman: The Animated Series line. It's a good time for fans of Gordon, I guess. Ready to see how this one turned out? Then join me after the break... 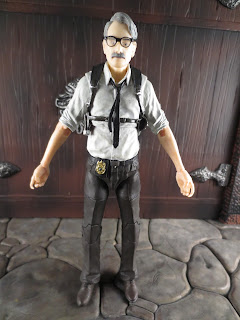 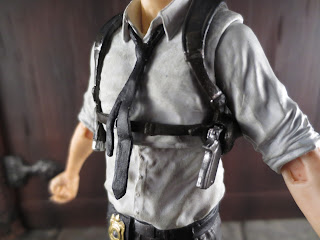 * I like how DC Collectibles pulled off Gordon's shoulder holster and necktie. They're both separate pieces from the torso and are molded from a flexible, rubbery plastic. The neck tie hangs down realistically while the shoulder holster can hold Gordon's pistol under his left arm (there are some spare magazines sculpted on the holster under his right arm). 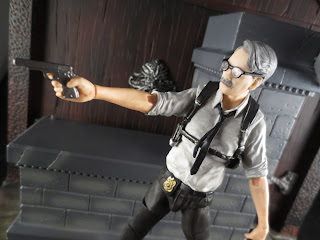 * Overall I'm pretty happy with Gordon's articulation. His legs have an excellent range of motion and his arms assume pistol firing poses really well. The head also has an insane range of movement so Gordon can completely survey his surroundings. I really appreciate how sturdy these figures feel compared to what we were getting from DC Collectibles a couple of years back. They feel almost as durable as what we get from Hasbro and Mattel, two companies who almost always produce sturdy action figures. 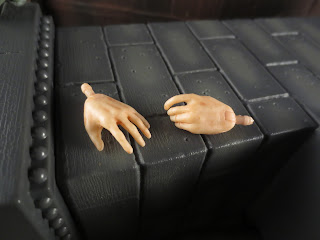 * Interestingly, Gordon comes with two interchangeable left hands. One is sculpted to grip the included walkie-talkie while the other is  a simple, open-handed gesture. It's certainly not a necessary feature but I always appreciate more ways to display a figure. The hands swap very easily, too. 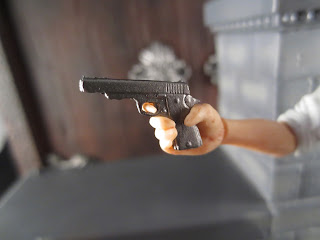 * Gordon is equipped with a simple pistol. It looks like the standard .45 pistol that an officer might use. It's compact and fits nicely in his right hand or in his shoulder holster. 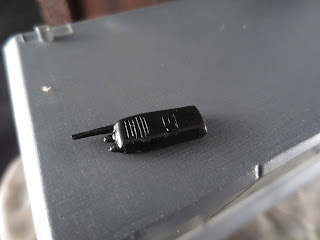 * A walkie-talkie is kind of a default accessory for Jim Gordon as other versions of the character have come equipped with one, too. There's not much to the sculpt but it fits in Gordon's left hand well and certainly looks like a walkie-talkie. 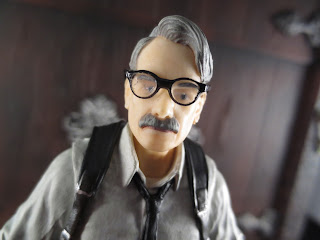 * This....is terrible. This is easily one of the worst headsculpts on an action figure that I purchased last year. In my defense, I ordered him from an e-tailer sight unseen. This looks less like the face of Jim Gordon and more like one of the Beastie Boys dressed up in the music video for "Sabotage."  I like that video, though. I'm not digging this figure. The glasses just don't line up, either. 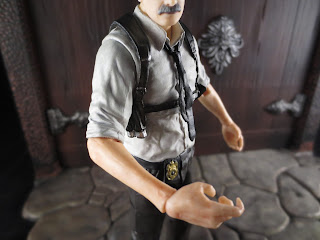 * I mentioned that most of the articulation on this figure is quite good but I do have to mention that the shoulders and the elbows are a bit too limited. Unless you have Gordon aiming or firing his pistol you're just not going to get a good looking neutral pose out of him. The hinged elbows don't allow for much of a bend and his shoulders don't come in close to his side, leaving his arms hanging out at an odd angle. 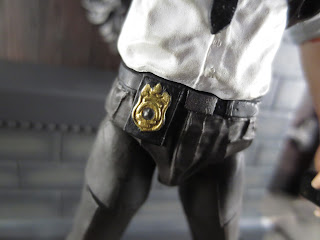 * As I mentioned above when talking about the headsculpt, the sculpt of this entire figure just feels really soft and under-detailed. Nothing looks sharp or clean. I didn't notice this problem on any of the figures from series 1 until I received the Arkham Knight Batman or Christmas. Series 2 Catwoman is really sharp, but Gordon feels like a badly realized digital sculpt. I'm not sure if the blame here rests on Gentle Giant Studios or DC Collectibles, but it's really disappointing that Gordon just doesn't have the crisp, detailed sculpting the Arkham figures have been known for. 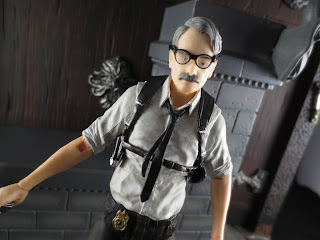 This figure does a few things right but overall it's just a mess. Honestly, if I were comparing this to the Arkham Knight Harley Quinn, Catwoman, Red Hood, Scarecrow, or the Arkham Knight himself, I'd have thought he was from a different line. The sculpt is just far too underdetailed and lifeless. This really could have been an excellent Gordon figure but, as it stands, this guy is pretty shoddy. Pick up the Capullo version if you can or just wait for the Animated version later this year. This guy gets an Eh from me. He's just not up to par with the rest of the line.


The only other Jim Gordon figure I've reviewed on here is the Greg Capullo styled Commissioner Gordon from DC Collectibles.

I've reviewed plenty of other Arkham Knight figures, though, including: