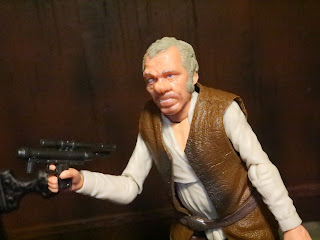 Ready for another Star Wars: The Black Series review? Today we return to the original film with a look at one of the many dangerous patrons of Chalmun's Caninta: Dr. Evazan. Dr. Cornelius Evazan certainly doesn't have much screen time in A New Hope but, my gosh, does he make the most of it. He has some of the most memorable lines in the movie and both he and Ponda Baba com off as a truly threatening duo until they get their butts handed to them by Obi-Wan Kenobi. Since appearing in the original film Dr. Evazan have appeared in plenty of books and comics, both set before and after A New Hope, even netting a cameo in Rogue One. Dr. Evazan's an evil son of a gun who tortures and performs unlicenses (and unwanted) surgery across the galaxy. The cantina patrons from Star Wars haven't gotten much love in the Black Series so it's nice to finally have a couple more to keep Greedo company. Dr. Evazan was released last year in the Cantina Showdown set that was a Hasbro PulseCon exclusive inspired by the 1997 Power of the Force 2 Cantina Showdown set, but as far as I'm aware this is the exact same figure. Let's check out Dr. Evazan after the break and see how he fares in the Black Series... 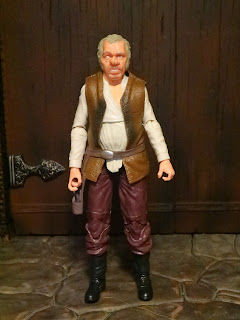 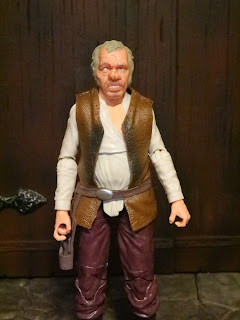 The Positives:
* Dr. Evazan is a character that never looks right to me. I think my mind always compares him to the Power of the Force 2 that I had as a kid which was fairly inaccurate. This guy is way more accurate, though, and does look like his film counterpart. He's wearing a pretty basic Star Wars outfit: Long sleeved tunic-like shirt, pants, boots, and a vest. His vest is a separate piece and there's a really nice texture and paint weathering on it. His shirt hangs down and looks like it has truly seen better days. Dr. Evazan definitely looks like a scoundrel on the run. 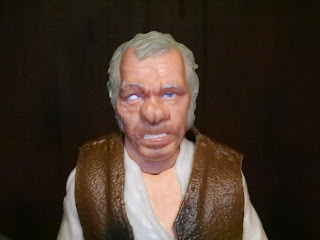 * The likeness is quite good here with lots grisly detail showing off Dr. Evazan's disfigure mug. The oddly shaped nose and his marred eye look great. He's a weird, frumpy guy who is also pretty intimidating. 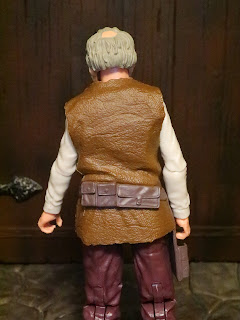 * Flip him around and you can see more of the detail on his vest. He's also sporting some additional pouches on his belt for carrying who knows what. 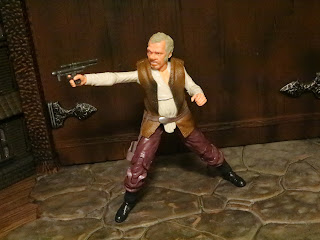 * The articulation on the figure is really good. He has almost all of the joints you'd expect (no butterfly shoulders) though his legs have the older styled double hinged knees. They're probably reused from somewhere though I don't recognize them. He's sturdy, durable, mobile, and he has the death sentence on twelve systems. 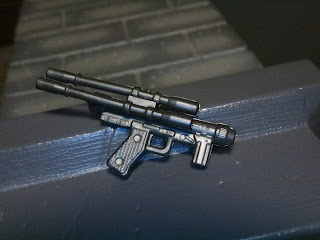 * Dr Evazan comes with a BlasTech SE-14 pistol which is one of my favorite blaster designs. It's just such a cool looking little pistol. 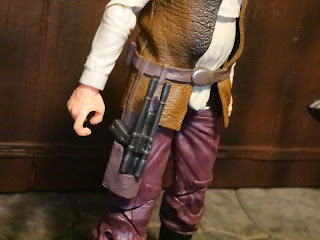 * It also first perfectly in the holster on Dr. Evazan's right hip. 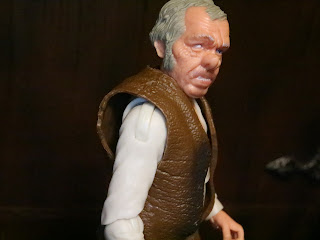 The Negatives:
* My only real complaint with Dr. Evazan is that the arm holes on his vest really expand out quite a bit. You can get them adjusted but they tend to flare back out with any movement. 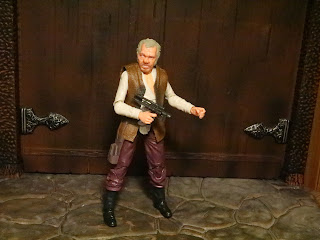