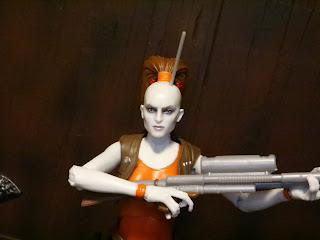 I'm continuing my review miniseries of Star Wars: The Black Series Phase IV figures and today I'm checking out Aurra Sing, the Palliduvan bounty hunter who first appeared in Episode I (briefly!) and later made a name for herself in The Clone Wars. Aurra Sing is one of those characters who initially was just popular due to her unique appearance but over time she became an interesting character who was sort of a mentor and a maternal figure to young Boba Fett. Bounty hunters, especially alien bounty hunters, almost always make fantastic action figures and it's pretty cool to see Aurra Sing make her way into the Black Series. She's part of the most recent series of figures released alongside of General Lando Calrissian, Tech, Q9-0, and Koska Reeves which is a pretty strong series of figures. Interestingly, Hasbro sourced her to The Clone Wars instead of Episode I. While she did appear in both, and actually had dialogue and such in The Clone Wars, I still kind of wanted to see her as an Episode I figure since that was her first appearance. Oh, well. Let's check out Aurra Sing after the break... 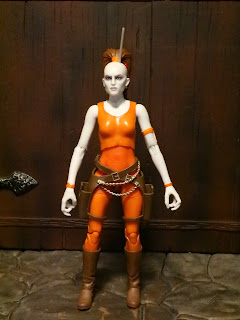 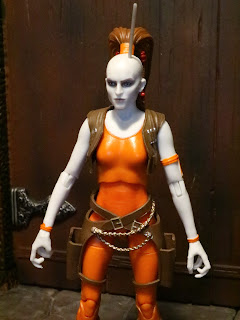 * Hasbro has done an excellent job on Aurra Sing. Bounty hunters are always fun and Aurra Sing has a lot of unique elements to her: A bright red bodysuit, pale white skin, and some cool belts and a vest with lots of little details. Apparently part of her torso is reused from Vice Admiral Amilyn Holdo but it's nothing you'd recognize. It's a pretty standard "form fitting clothing" body. There's plenty of flourishes on Aurra Sing that show off how unique she is like the bracelets on her arms and her long, Palliduvan fingers which she can use to draw blood. Weird! 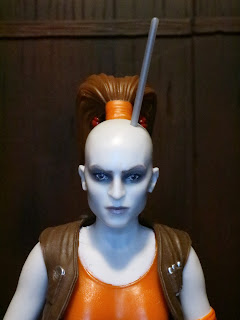 * Aurra Sing's headsculpt is perfect. She looks very stern and very creepy, just like in the material. Well, not terrifying or anything but there's a very unusual look to her with her deep, dark eyes. Apparently they're a tribute to Pris Stratton from Blade Runner. Aurra also has the antenna sticking out of her head, a hint at the various cybernetic implants she has embedded in her body. 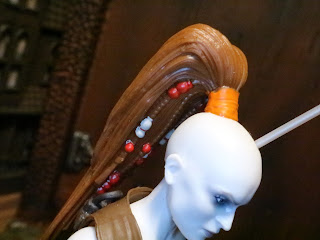 * Aurra Sing's hair is tied back into a massive ponytail and it's stylishly adorned with lots of beads and braids. 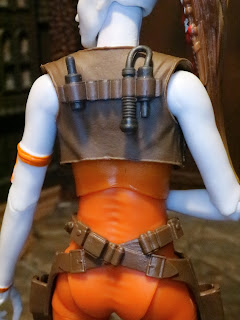 * From the back you can se that Aurra Sing is carrying some random gear in the loops of her removable vest. She's also sporting some various pouches and capsules on the back of her belt. She's probably read for anything! 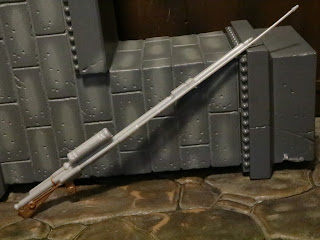 * Aurra Sing's massive rifle is a bit of an oddity in Star Wars weaponry. It's a slugthrower, meaning it actually launches a projectile. It's called an Adventurer slugthrower rifle and it's a pretty accurate sculpt which the figure can actually wield. The plastic seems a bit toyish, though, and it's definitely missing a few paint apps. 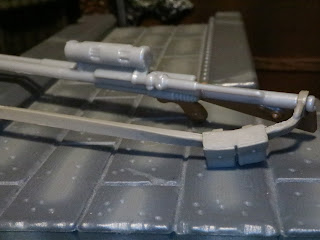 * The Adventurer does have a removable sling which has a few pouches attached to it. this can be used to throw the rifle across Aurra's torso, just like she wears it in the film and in many photos. 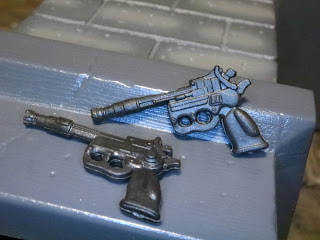 * Aurra Sing also wields two DX-13 pistols. These are very cool and sleek blasters with two holes for her unique fingers to slide through, presumably giving her a better grip. 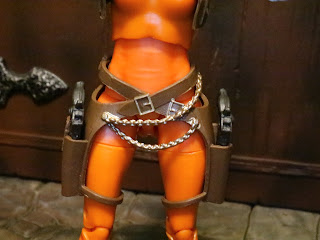 * When not in use the DX-13s can fit perfectly into the dual holsters on her hips. The holsters are quite cool with various buckles and chains on the belts. 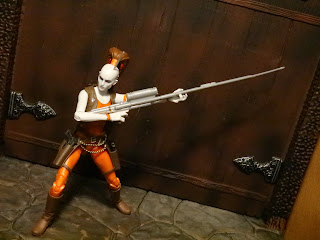 * Aurra Sing has excellent articulation. All of her joints have a great range of motion and she can take a variety of poses utilizing her blasters. Two-handed rifle firing posters, two fisted blaster firing poses, Aurra can do it all. She's fantastic. 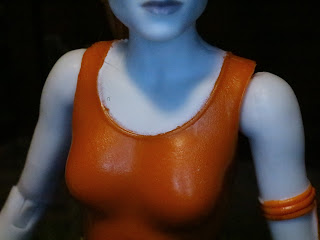 * The neckline of Aurra's top is a bit messy with a lot of over spray from her shirt. If you have the good fortune to select between a couple different figures make sure to check this detail out. 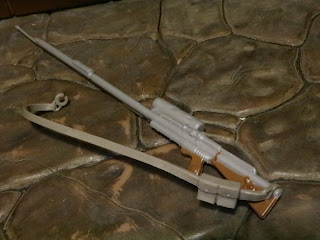 * The sling on the Adventurer tends to come off quite easily. It's cool in theory but it's a little bit of a pain. 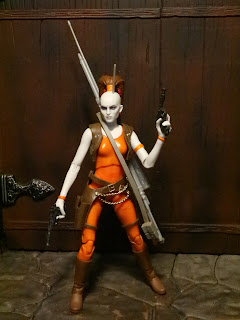 While there have been seemingly endless repaints, repacks, and such this year Hasbro has also put out some very excellent figures and Aurra Sing is one that fans ought to be talking about. She's a fun toy with quite a few cool accessories, excellent articulation, and a unique look. If you're like me and love putting all of your bounty hunters and scoundrels together on your shelf she'll stand out for sure. She's got a few issues but nothing that ruins the toy. Currently the Black Series figures are experiencing a price change and you'll find her at retail priced anywhere from $19.99 all the way up to $24.99. I managed to scoop her up for $19.99 which seems like a good value. She's a Great and a 1/2 figure and in a year where I'm no longer a Black Series completest she's a figure that was definitely on my "must have" list. The only version of Aurra Sing I've owned previously was the 1/18th scale version from The Clone Wars but this one is a nice improvement.