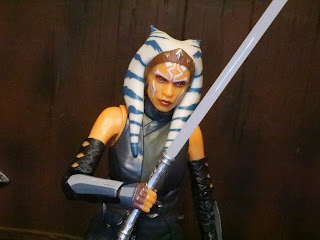 Well, I feel like I went through quite a dry spell with Star Wars: The Black Series figures but recently I happened to stumble into quite a few new ones that I was actually looking for. I'm sort of worn out on endless, overpriced Clone and Stormtrooper repaints but new versions of beloved characters and stuff, especially from The Mandalorian? I'm down for that. Today I'm excited to take a look at Ahsoka Tano from The Mandalorian. Ahsoka appeared in season 2, played by Rosario Dawson. While I'd always dreamed of Ashley Eckstein getting the chance to play Ahsoka Tano in a live action Star Wars project, Rosario Dawson has done a fantastic job of bringing the character to life during a different stage of Ahsoka's journey. In The Mandalorian and The Book of Boba Fett Ahsoka is in her early 40s and is a more mature, seasoned... Force wielder? Is Ahsoka a Jedi again? While she left the Jedi Order during The Clone Wars and stated that she wasn't a Jedi in Rebels, she definitely seems to have embraced her Jedi roots again in The Mandalorian and BOBF. She's had lots of training under experienced masters and years of experience, so perhaps she's helping to teach Luke Skywalker some as well. Let's take a look at Ahsoka Tano from The Mandalorian after the break... 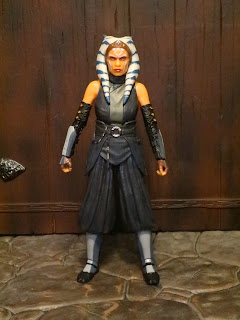 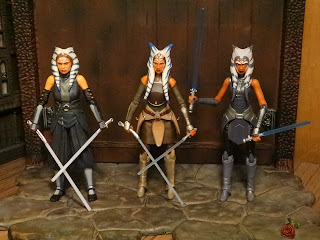 Comparison:
* Here's a comparison shot of this Ahsoka Tano from The Mandalorian (left), the Rebels Ahsoka Tano (center), and the Clone Wars season 7 Ahsoka Tano (right). This new version is completely unique from the previous releases and definitely captures the on-screen look for Rosario Dawson's depiction of the character while the other figures maintain a somewhat more animated aesthetic. 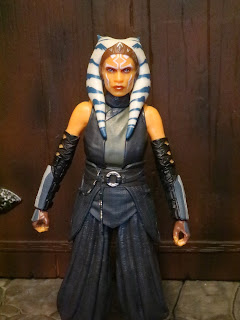 The Positives:
* Ahsoka Tano is an excellent looking figure. Hasbro has been doing a great job with most of the Black Series releases, particularly unique characters from new media and the films, and Ahsoka is definitely a well done figure. She doesn't seem to have any reuse and looks plenty accurate to the source material. Her outfit is rather dark but it's still made of many different types of material and has multiple different shades of color to it. There's also some intricate sculpting and detail paintwork on her arms to show off her bracers and the lacings for them that run up to her biceps. 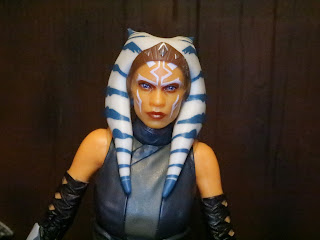 * The portrait not only is instantly recognizable as Ahsoka but it also is clearly Rosario Dawson as Ahsoka. The sculpt is excellent and rather life-like with fantastic paint applications. Her eyes and the details on her montrals and lekku are particularly eye-catching and well painted. This is excellent work all arounds. 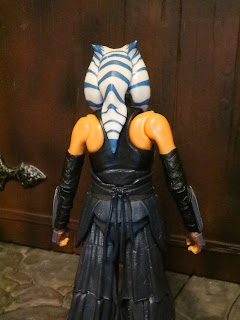 * Here's a shot of Ahsoka's back. One, it's pretty cool how her belt is tied in the back. Two, it shows off the lek hanging down her back. Three, it shows off the excellent and well hidden butterfly joints Ahsoka is sporting. That's a really clever way to handle those. 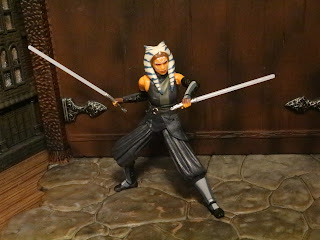 * Ahsoka moves wonderfully and is a fantastic, poseable, and durable toy. Hasbro did a great job of capturing the look of her outfit, especially the pants that billow out around her knees, and still found a way to get useful knee articulation in there. Mix that with the butterfly hinged shoulders and Ahsoka is ready for battle. 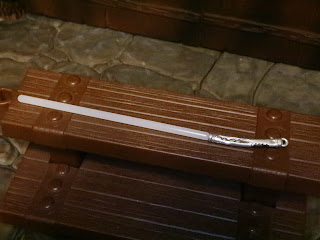 * Ahsoka comes with two lightsabers, one shorter and one longer. Here's the longer of the two. It has a curved hilt with some rather ornate details on it and a very nice solid white blade. 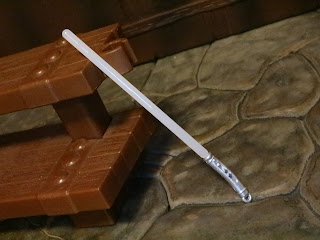 * Here's the shorter saber. I really like the look of the solid white blades on Ahsoka's lightsabers. 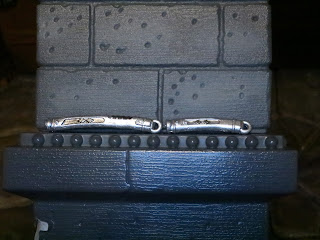 * The hilts are easily removable from the blades and they feel way more durable than previous releases. The blades used to feel very fragile, like the small peg connecting to the hilt would break off, but Ahsoka's blades feel much sturdier. 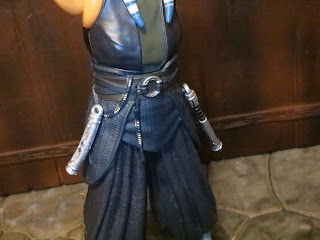 * Both lightsaber hilts also attach on the small hooks at the sides of Ahsoka's belt. The fit on and stay on fairly well. Unless you're actively fumbling her around the hilts should stay on just fine. 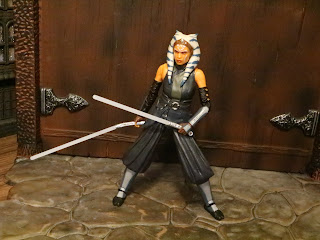