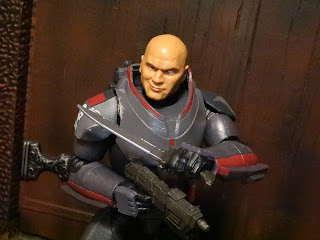 At a recent online event a few weeks ago Hasbro showed off upcoming figures for Omega and Echo which still haven't gone up for preorder. Hasbro did manage to get out the original four members of the Bad Batch in 2021, though, which was quite welcome. I've now acquired all four members of the original Clone Force 99 and I'll be reviewing them (along with a few other Star Wars: The Black Series releases) in the next few days. I reviewed Hunter back in July, so now let's move on to Wrecker, the muscle of the group. Whether talking about physical power or explosive power, this demolitions expert is your guy. I love Wrecker. He's just such a lovable guy and his relationship with Omega adds a lot of heart to the show. Wrecker is one of Hasbro "deluxe" figures which are getting to be a bit of contention with collectors. Wrecker might be a bit taller and bulkier than his squadmates but is he really so huge that he deserves to be a deluxe release? That doesn't seem to hurt his sales, though, as I saw him when he first came out a few times and then he was gone, unlike the previously released deluxe Jar Jar Binks who his clearance a few months back. Clones and armored characters are almost always popular, though, and Wrecker is a pretty impressive figure. Let's check him out after the break... 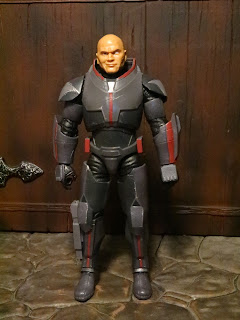 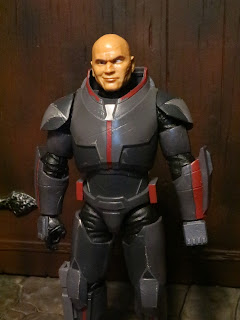 The Positives:
* Wrecker is wearing some modified Katarn-class commando armor that is specially design to suit his larger frame. He's a beast. Maybe not truly big enough to warrant a "deluxe" release but he still looks suitably bigger than his fellow clones. The paint work is excellent and there's a lot of detail in both the paint applications and on the sculpt. The pauldrons are separate pieces that move freely and really ensure that while he's armored up Wrecker can still move about freely. 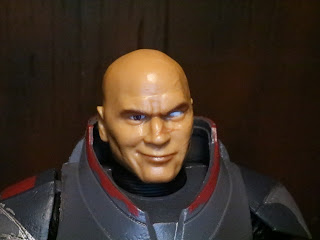 * The headsculpt is excellent. I really like how Hasbro transfers the animated characters into the "real-world" look of the Black Series and they did a great job with Wrecker. He still looks like Temeura Morrison but larger and with a suitable unhinged and lopsided grin. Wrecker just oozes personality, doesn't he? 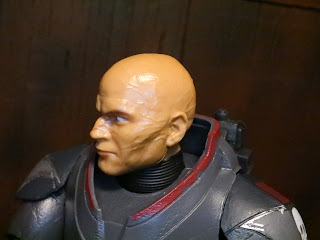 * Turn Wrecker to his side and you can see his scars from his previous exploits. This is really impressive sculpting for the Black Series and further adds to the personality of the sculpt. Hasbro managed to put a lot of detail an character into this headsculpt. 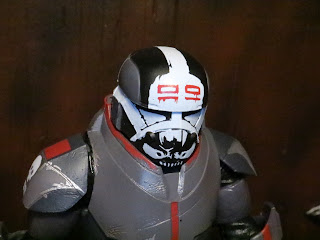 * Wrecker's helmet fits wonderfully and it's covered with lots of paint applications. This looks like something painted by a guy who likes to ram into things and blow things up, doesn't it? 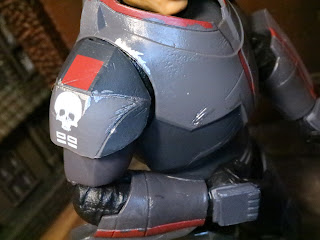 * The armor has the really cool Clone Force 99 logo on the pauldrons and lots of nicks and dings on the armor. it's nicely worn and weathered, just like you'd expect from the Bad Batch. 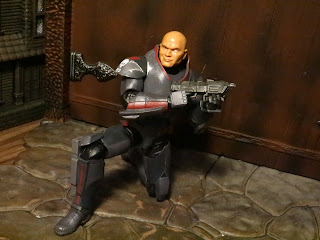 * Wrecker has fantastic articulation. he's got everything you'd expect including a balljointed neck and lateral pectoral joints. He can stand, crouch, and hold weapons with both hands, something that's pretty impressive for a bulky guy wearing armor. Wrecker is a real winner and super fun to mess around with. 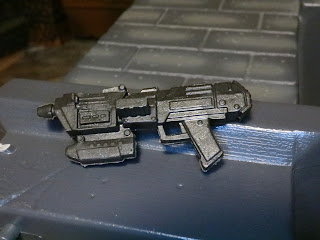 * Wrecker comes with a DC-17m Interchangeable Weapon System/ Repeating Blaster Rifle, a weapon created for the video game Star Wars: Republic Commando. In the game the weapon could be converted for multiple functions (sniper rifle, grenade launcher) though I think in The Clone Wars and The Bad Batch we just see it used like a standard blaster. 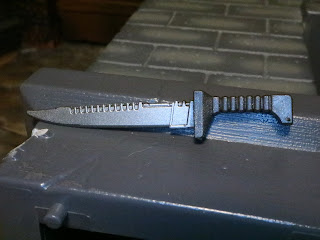 * Like Hunter, Wrecker also comes with a knife. Wrecker's knife is much longer than Hunter's, though. For anyone else this would easily be a short sword. It's pretty intimidating with nice detail work on the blade. 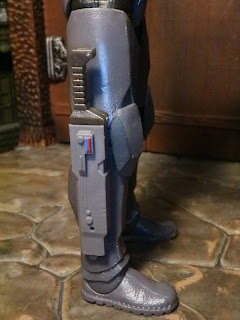 * Wrecker has a functional sheathe for his knife on his right hip. It works great and looks pretty cool with a few small paint applications on the side. 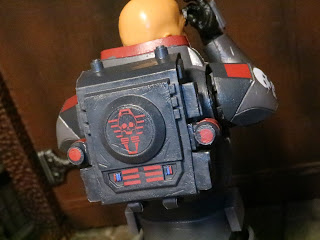 * Wrecker's pack attaches securely to his back and has multiple paint applications to show off lights and such, the Clone Force 99 logo, and some explosive devices on the sides. 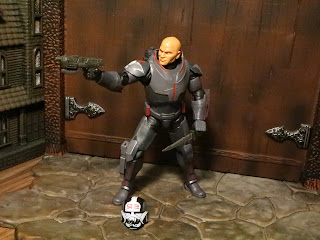 Despite not being sure that Wrecker really qualifies as a deluxe figure I really do think he's one of my favorites of the year so far. He's got a nice assortment of accessories (though not any more than some non-deluxe figures), an excellent sculpt, a fantastic portrait, and amazing articulation. The Bad Batch is a really fun show and so far the figures I've reviewed of the cast have all been excellent. This guy is an figure and one of the best of the year for The Black Series. In a year where the line has been overwhelmed with paint variants and a lot of reuse there's still been some great all new figures and Wrecker is one of them. He's for sure Epic.
This is the first figure of Wrecker I've reviewed. For more figures from Star Wars: The Black Force Phase IV check out the following:
332nd Ahsoka's Clone Trooper
Admiral Ackbar
Ahsoka Tano (The Clone Wars)
The Armorer
Asajj Ventress
Boba Fett
Bo-Katan Kryze
Cad Bane
Clone Trooper (Holiday Edition)
Darth Vader
Din Djarin (The Mandalorian) & The Child
Garazeb "Zeb" Orrelios
General Lando Calrissian
Greef Karga
Han Solo (Endor)
Hunter
Imperial Stormtrooper
Incinerator Trooper
Jar Jar Binks
Jaxxon
Kuiil
Luke Skywalker (Endor)
The Mandalorian
Mandalorian Loyalist
Mandalorian Super Commando
Moff Gideon
Phase I Clone Trooper
Phase I Clone Trooper Lieutenant
Princess Leia Organa (Endor)
Range Trooper (Holiday Edition)
Remnant Stormtrooper
Rey (Dark Side Vision)
Sith Trooper (Holiday Edition)
Speeder Bike, Scout Trooper, & The Child
Teebo (Ewok)
Posted by Barbecue17 at 11/12/2021