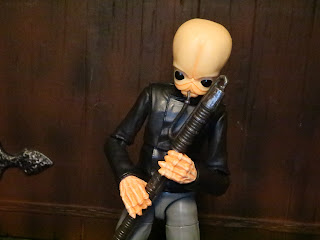 I received a few Star Wars: The Black Series figures for my birthday last month but since I've been so busy with 31 Days of Toy Terror it's taken me longer to get around to reviewing them! Today I'm starting things off with a look at Figrin D'an, the leader of the Modal Tones. Being one of the most rocking jizz bands around, "Fiery" Figrin D'an and the Modal Tones are well known throughout the galaxy for their music, particularly their hit single "Mad About Me." The Cantina Band has always been well loved but, oddly, Kenner never included them in the vintage Star Wars toyline. They didn't appear as an action figure until the Power of the Force 2 line in 1997 where they were sold as a Star Wars Insider mail-away. That figure came with five different instruments, so you could build most any member of the band or purchase a group of figures to add in all seven different members. Or eight. There seems to be a discrepancy of how many band members there are based on some Expanded Universe references, particularly from the Star Wars trading card game. Theres also a seated Bith band member wearing a rober. Anyways, creating multiple members from one release is actually kind of the approach that Hasbro is taking with the Black Series version of the Cantina Band. Figrin D'an includes three instruments, allowing him to serve as four or five different musicians (two musicians play the fanfar and the seated Bith might also be a kloo hornplayer) while the deluxe Nalan Cheel figure includes the three other larger instruments. Let's take a look at Figrin D'an, or Tedn Dahai, or Ickabel G'ont, or Doikk Na'ts, after the break... 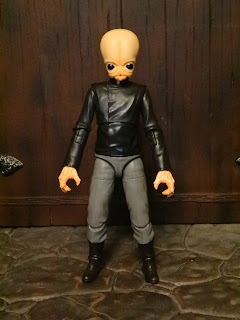 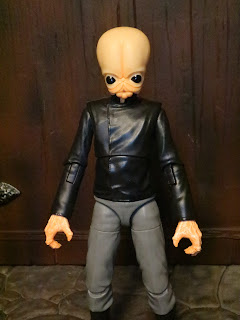 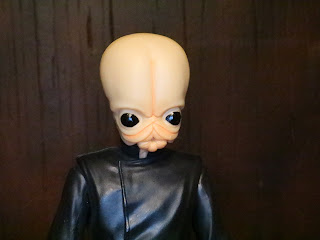 * Since all the bandmembers look the same you can pretend this guy is any of the seven you want. The headsculpt is excellent and really features some fantastic detail on the face and around the eyes, as well as some great paint effects to highlight the bulbous head. The mouth is hollow so that instrument mouthpieces can fit inside. 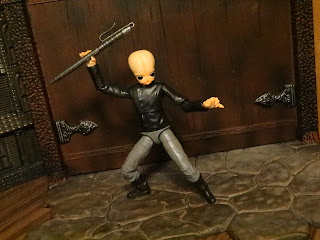 * The articulation is as good on the Bith band members as on pretty much any other modern Black Series and they can hold all of their instruments quite well. The figure doesn't have the butterfly hinges for the shoulders, which I think would have been a big help, but they do have balljointed necks and balljointed wrists. Those are a big help in setting up poses where the mouthpiece needs to fit in the mouth and the hands need to be holding the instrument in a certain way. 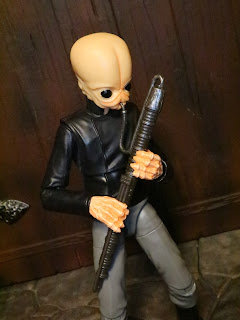 * There are three instruments included with this set so let's start checking them out. First up is the kloo horn, the signature instrument of one Mr. Figrin D'an. The seated Both in robes is also known as Lirin Car'n, and might be a second kloo horn player. The kloo horn does come apart in the middle, but I presume that was a decision made to help with molding the accessory rather than a play feature showing how Fiery Figrin D'an snaps his kloo horn in half after a particularly epic performance. The detail is really nice on all of the instruments and the kloo horn is particularly detailed with some rather nice paint highlights. I think he looks great holding it and rocking out. 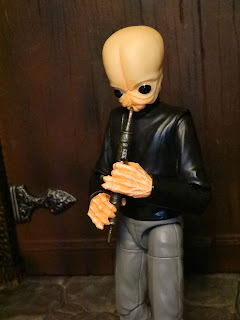 * OK, so this is the fanfar, played by Tedn Dahai. It also might be the same prop as Ickabel G'ont's double jocimer, though the instruments are supposed to be different in canon. Anyways, it's a small flute like instrument and I doubt anyone would blame you for using it as both instruments. It's a cool little piece and fits in the hands well. The mouthpiece isn't snug in the Bith's mouth but it does fit there and rests when standing. 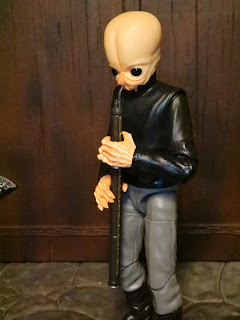 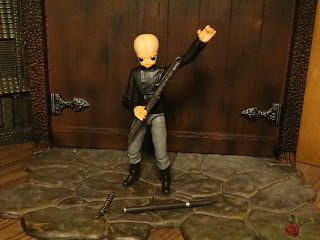 This is a pretty neat figure that at least gets you three, and possibly even up to five, of the Cantina Band members. The base figure is great and the instruments are well made and able to be held correctly by the figure. I'm not sure if I'm going to ever attempt to have a full band of six, or seven figures (definitely not eight- that guys was just sitting around) but I also have the deluxe Nalan Cheel so I'm at two. I'll be reviewing him soon. Honestly, wouldn't it be cool if Hasbro released these guys in plain white mailers with no accessories for a cheaper price in a few months as an easier way to complete your band without needing to have a pile of extra accessories laying around? Anyways, Figrin D'an is a Great figure and cool to have around even if he's the only one you snag. He's just super cool and it's always welcome to have more Cantina aliens.