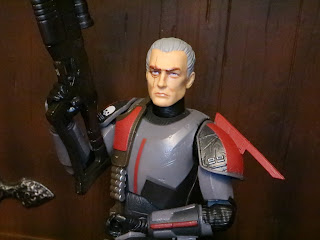 I've been looking for Crosshair since the release of the series he came in back in late spring/ early summer and I finally ended up paying a couple dollars more to get him. Now that I'm reviewing the fourth Bad Batch figure of this year I have to say that all four of these guys are probably in the top 10 Black Series releases of 2021 and are one of the strongest teams/ subsets in the line. While Crosshair was part of Clone Force 99 in season 7 of The Clone Wars, he ended up remaining loyal to the Empire in The Bad Batch and betraying his team. He just looks like an evil guy, right? Crosshair, AKA CT-9904, is an incredible figure and I'm excited to finally have him in hand. Let's check out the supreme marksman of Clone Force 99 after the break... 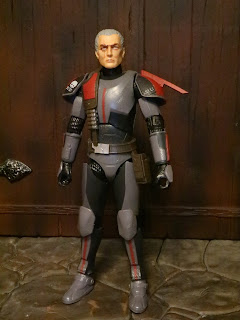 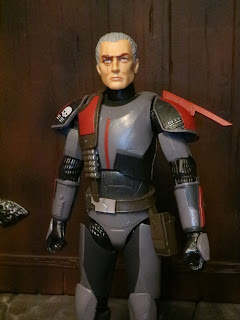 The Facts:
* Crosshair is wearing the fairly standard Katarn-class commando armor with that awesomely chilling gray, black, and red color scheme. His armor has an elaborate flourish on his left shoulder and he's sporting a bandolier over his right shoulder that attaches to his belt. The armor is nicely with clean paint applications and lots of little nicks and dents to show off the battles this guy has been through. 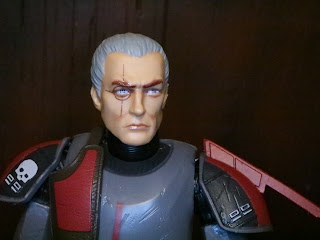 * Crosshair might have my favorite portrait of all of the Bad Batch. He absolutely looks like a stone-cold killer and a guy you wouldn't want to mess with. Crosshair has augmented vision and he sports a tattoo of a crosshair around his right eye to draw special attention to that skill. He looks the least like Jango Fett/ Temuera Morrison to me but that does seem fitting for the show. This portrait represents Crosshair pre Order 66 as he definitely changes up his hair a bit after pledging loyalty to the Empire. 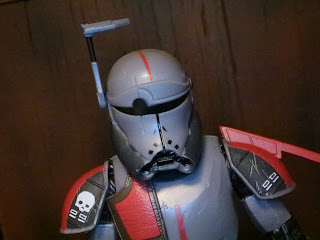 * His helmet is modified with a rangefinder and a semicircle cut out around his eye to allow for better usage of a scope. The paintwork is excellent here and the overall design is impressive. 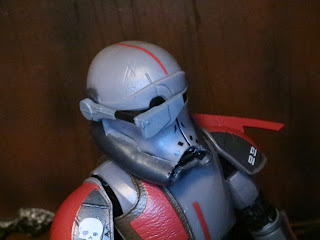 * That rangefinder can flip down, too. That's always a fun feature and I never get tired of it on Clones and Mandalorians. 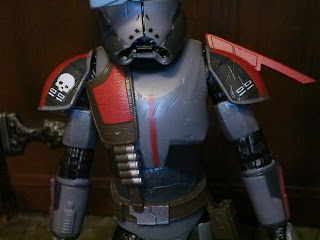 * Here's a closer look at all of the gear on Crosshair's armor. The bandolier/ shoulder strap looks awesome as do the graphics on his pauldrons that show off the Clone Force 99 logos. What's the deal with the cool protuberance on his pauldron? I love it but I'm not sure what it is? 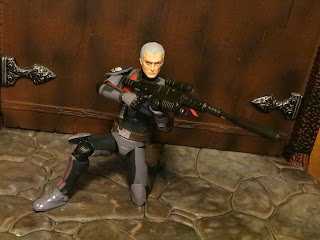 * As we used to say in the late 90s and early 2000s, I think Crosshair is both spiffy keen and the bomb diggity. Seriously, he's an awesome figure with great articulation who looks good in a multitude of poses. His rifle is pretty large and he still looks great in firing positions with it. This is a durable, high quality figure and one of my favorites of the year. 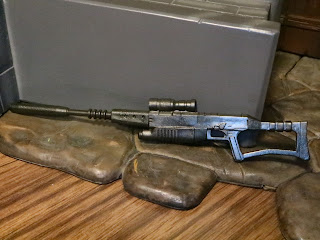 * Since he's a marksman it's only fitting that Crosshair comes packed with a sniper rifle. The 773 Firepuncher rifle, no less. This is a really cool, sleek blaster rifle that looks great in Crosshair's hands. 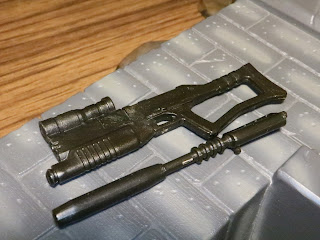 * It also breaks down for easy storage. The barrel pops out leaving you with a shorter blaster. Could this be used as a blaster rifle for close quarters combat? Sure, why not! 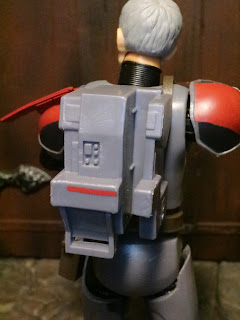 * Crosshair also comes with a backpack that fits securely on his back. It's a little different than Hunter's backpack as it has some slots in it for storage. 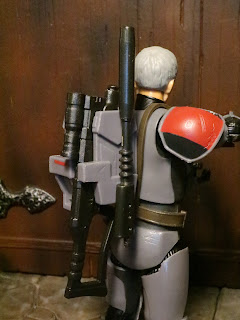 * The Firepuncher rifle components can fit onto the backpack for carrying it on the go. The barrel plugs into the side of the pack while the main body fits into the slot in the middle of the backpack. This is a cool feature and it definitely makes Crosshair a very exciting figure. It's always cool when figures can store all of their gear on them. 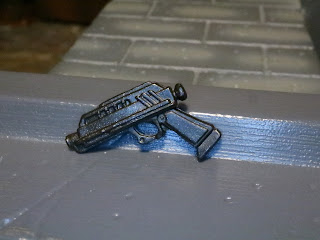 *  Crosshair also comes equipped with the DC-17 hand blaster. It's a cool little blaster pistol that should further aid him when he has to get close to his enemies. 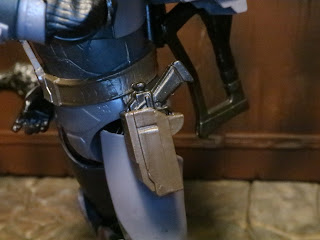 * There's a functional holster on his left hip as well and the DC-17 fits in there perfectly. Crosshair can carry both of his blasters and still have his hands free! He's living the dream, baby. 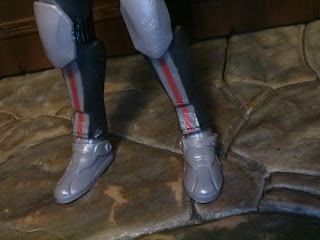 The Negatives:
* My only complaint is that the ankle hinges are really tight. It takes a lot of work to get them in the proper position to keep Crosshair standing properly. 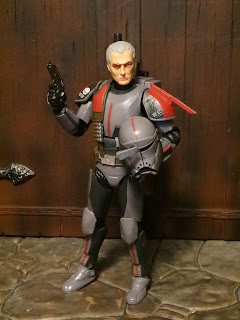 Crosshair is another very, very impressive figure. It's really quite amazing how excellent the Bad Batch figures turned out. They're truly the highlights of the year so far! Crosshair has awesome accessories, an amazing headsculpt, and fantastic sculpting and paintwork. He's one of the most fun figures to mess around with I really wish he were easier to find. There is a Walmart exclusive Imperial Crosshair but he's a bit inaccurate since he is largely a repaint without a new portrait (he does get a helmet, though) and I haven't found one yet. This is the guy to get in my opinion. He's an Epic figure and another example of how good the Black Series can be. Next year we should be getting Echo and Omega so I'm excited to see how all of these figures look displayed together.
I hope you enjoyed this mini review marathon of Star wars: The Black Series figures! I'm sure there will be more Black Series reviews to come in the coming months!
This is the first figure of Crosshair I've reviewed. For more reviews from Star Wars: The Black Series Phase IV check out the following:
332nd Ahsoka's Clone Trooper
Admiral Ackbar
Ahsoka Tano (The Clone Wars)
The Armorer
Asajj Ventress
Aurra Sing
Boba Fett
Bo-Katan Kryze
Cad Bane
Clone Trooper (Holiday Edition)
Darth Vader
Din Djarin (The Mandalorian) & The Child
Garazeb "Zeb" Orrelios
General Lando Calrissian
Greef Karga
Han Solo (Endor)
Hunter
Imperial Stormtrooper
Incinerator Trooper
Jar Jar Binks
Jaxxon
Kuiil
Luke Skywalker (Endor)
The Mandalorian
Mandalorian Loyalist
Mandalorian Super Commando
Moff Gideon
Phase I Clone Trooper
Phase I Clone Trooper Lieutenant
Princess Leia Organa (Endor)
Q9-0 (Zero)
Range Trooper (Holiday Edition)
Remnant Stormtrooper
Rey (Dark Side Vision)
Sith Trooper (Holiday Edition)
Speeder Bike, Scout Trooper, & The Child
Tech
Teebo (Ewok)
Wrecker
Posted by Barbecue17 at 11/16/2021