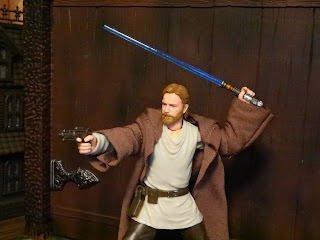 It's been around three months since I last reviewed a figure from Hasbro's Star Wars: The Black Series but recently there have been some releases I was looking forward to, one of which is Obi-Wan Kenobi (Wandering Jedi) from the recent television series. There are currently three Black Series versions of Obi-Wan planned but this one was the first I stumbled across and it's definitely the "main" look from the show. I really enjoyed Kenobi overall and while I'm not planning on picking up everything from the show, some version of the man who made saying "hello there!" a thing was definitely on my list. Over the past couple years the Black Series has alternated between overwhelming numbers of boring repaints and incredibly solid mainline releases. Obi-Wan Kenobi (Wandering Jedi) is one of those very respectable mainline releases who manages to feel worth the new, higher price point. Besides just being a fine figure of Obi-Wan, err..., I mean Ben, he also has a soft goods robe and a droid companion, LO-LA59, with articulation and accessories of her own. Let's check out this new version of Obi-Wan Kenobi after the break... 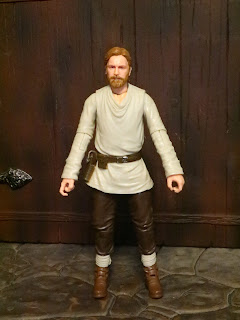 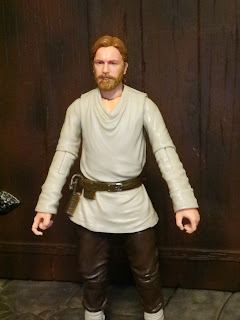 * This figure represents Obi-Wan in the basic, non-attention grabbing outfit he wears in the series when heading off to Daiyu to rescue young Princess Leia Organa. It's basic stuff and while the colors are very Tatooine and Obi-Wan, it's just something to blend in with the crowds and not draw attention to himself. The tunic is actually a separate rubbery overlay fitted over a sculpted chest, hiding some of the articulation. The folds are all well sculpted and it looks like what we see in the show. Nothing crazy unique but fitting a Jedi in hiding. 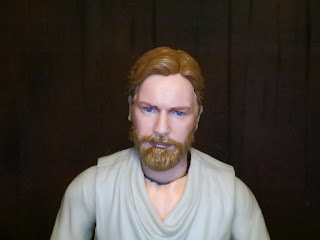 * The headsculpt on this figure is both really good and somewhat missing the mark at the same time. It looks good and I think that if you showed it to anyone familiar with Star Wars, they'd recognize this as Ewan McGregor's Obi-Wan Kenobi. The printing is neat and clean, the detail on the hair and bear is good, and from some angles it's an excellent likeness of McGregor as Kenobi in this series. He might look a bit too near here compared to how he appears on the show, but it's definitely not bad. 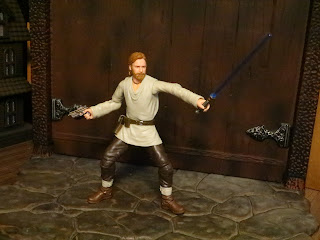 *  The articulation is once again excellent on this figure. Obi-Wan has all of the standard Black Series joints as the "butterfly" pecs, which are hidden under the tunic overlay. He feels durable and sturdy and all of his joints have a great range of motion. 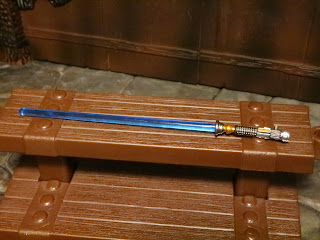 * Obi-Wan Kenobi's lightsaber looks fantastic with lots of detail on the hilt and a vibrant blue blade. 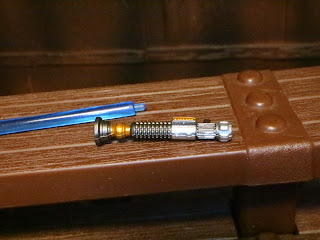 * The lightsaber blade is removable and Hasbro has greatly increased the quality of the blades, making the pegs sturdier and the blades easier to attach and detach. 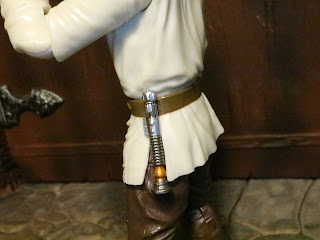 * Obi-Wan's lightsaber can attach to his belt via a small peg on the hilt. It's on his left side, so it stays mostly hidden under his cloak. 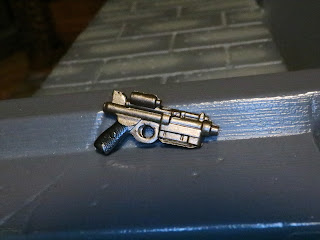 * I don't believe there's an official name for the blaster pistol that Obi-Wan carries yet, but he does equipped with the nameless but very cool blaster all the same. It's based on a Webley Mk 1 Air Pistol and has a great, weathered appearance that nicely matches what is seen on the show. It's really a very cool little blaster. Obi-Wan's no fan of blasters but since using a lightsaber is too conspicuous, he's gotta make do, right? 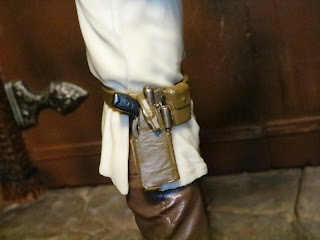 * The blaster tucks away securely inside the holster on Obi-Wan's belt. It pops right in and the strap easily fits across it, keeping it at the ready. 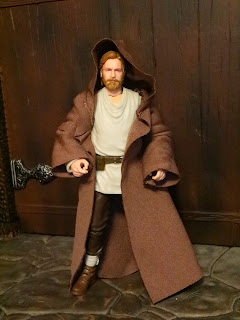 * To keep him disguised Obi-Wan comes with a fabric robe. It's very similar to a Jedi robe, but then again Jedi robes seem to be pretty similar to standard robes seen everywhere in the galaxy, so I'm sure folks looking at Obi-Wan just see a guy in a robe like half of the other folks walking around and looking to blend in. It fits well, feels like it's made from good quality fabric, and drapes nicely. The hood takes some work to get it in position but it's nice to have the robe here, especially considering how many previously released Jedi figures were left without robes. 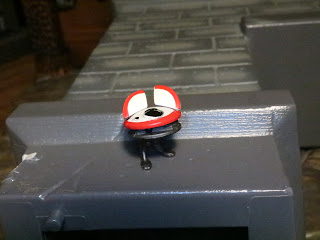 * I was quite surprised to find that Obi-Wan Kenobi includes L0-LA59, a "toy droid" owned by Princess Leia. L0-LA50, or Lola, seems like something that would be included with a figure of young Princess Leia but, since we haven't heard of anything yet, including her with Obi-Wan also works, too. Lola is really tiny but the paint applications on her are quite clean. The bright red and white really helps her stand out. 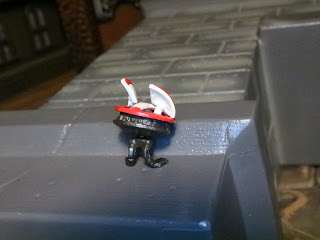 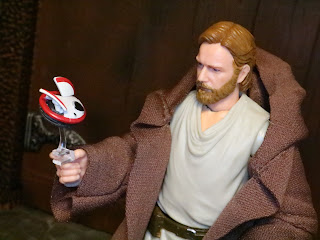 * Lola also comes with accessories of her own. Her legs pop out as one piece, allowing you to attach her to a small, clear flight stand. She "hovers" on a balljoint on top of the base. There's even a small clip which can attach on to the hand of a figure. Pretty neat stuff. 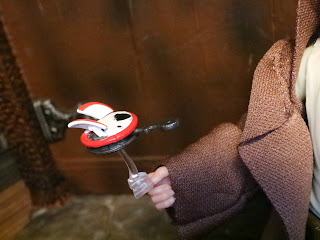 * Lola also has a little tiny buzz saw attachment that plugs into the little droid for aiding Leia and Obi-Wan during escapes. It's a super small piece, so be careful you don't lose it! 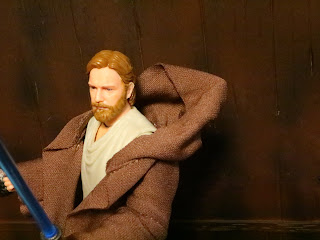 * The cloth goods robe is overall pretty impressive but I do wish Hasbro would find a way to help the hood stay down in a more natural fashion. I just can't get it to lay right. 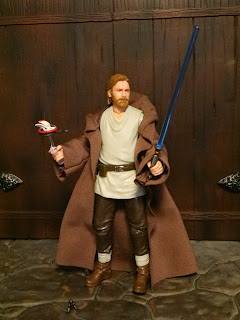 While I personally think Kenobi would have worked better as a film, I still very much enjoyed the show. While Sir Alec Guinness will always be the original Obi-Wan Kenobi with some of the most memorable lines in film history, Ewan McGregor's take on Obi-Wan has definitely become my default image of the character. When I think of Obi-Wan Kenobi, my mind first jumps to Ewan and I'm always glad to see more of the Prequel cast getting a chance to really shine. Second only to a battle damaged Darth Vader (who just has to be coming, right?) this is figure that is probably the most desired from this series for shelves and it's a good one. Hasbro did a fantastic job with the figure and really accessorized him well. Including L0-LA59 was a nice touch, though it does make me less optimistic that we'll ever get a young Princess Leia from the series. The Wandering Jedi version of Obi-Wan Kenobi gets a Great and a 1/2 rating from me and is an excellent example of how good the Black Series can still be.