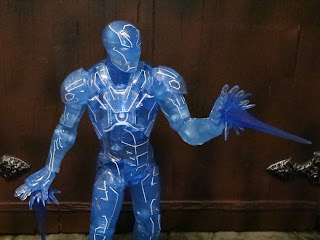 I've got another Marvel Legends Series review for today and this time it's Hologram Iron Man. This isn't an armor but a holographic avatar for Iron Man. I mean, I assume there's some electronics and machinery in here but it's not a traditional suit. I'll just come right out and say that I picked this figure up because I wanted to build Ursa Major and it seemed like it would be easier and less expensive to sell the figure if I really didn't end up wanting it than it would be to buy Ursa Major's head by itself. Back when Toy Biz released the Iron Man line from the 1994 animated series I had quite a few of those figures, one of which was called Hologram Armor Iron Man. I'm not sure why, though, because it was the Silver Centurion armor from the comics. This version seems to possibly be a bit of a Hasbro creation based on the A.I. Tony Stark from the comics, the new Hologram Iron Man skin from the Avengers video game, and the 1/18th scaled Iron Man mark VI Holographic from the Iron Man 2 series K-Mart exclusive Proving Ground set. This is a weird figure as it's sold as a comic figure but the body is from the Civil War version of Iron Man (mark 46?). That's unusual. Anyways, let's check this variant out after the break... 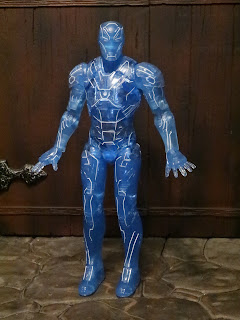 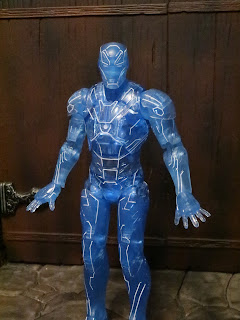 The Positives:
* Depending on whether or not you have an unhealthy love of translucent figures or not will determine how much you like this figure. It's not the most exciting Iron Man variant but it is a fairly attractive figure. The color chosen is pretty nice and does a good job of mimicking a holographic projection while the white lines that cover the armor add definition to the sculpt to make sure that the details aren't all washed out in a sea of blue. It's an effective look that does jump off the shelf. 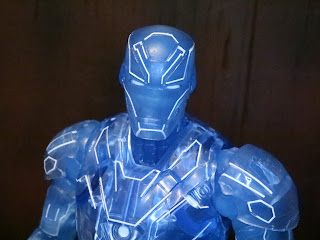 * This is a pretty standard Iron Man headsculpt which, again, is based off of the costume from Captain America: Civil War. The white details are placed just right here. 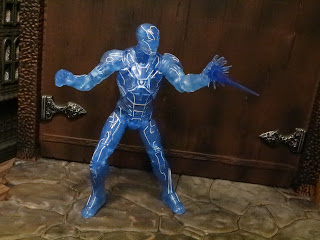 * It's rare to find a Marvel Legends figure that's truly not a good toy and Hologram Iron Man is no exception. He's solid, durable, and does have a nice array of joints to allow for some fun poses. He doesn't feel at all brittle or gummy which is a relief. Sometimes translucent figures are quality control nightmares. There are some oddities with this sculpt, though, which I'll get to in a moment. 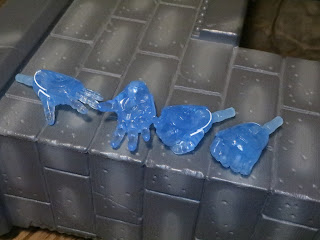 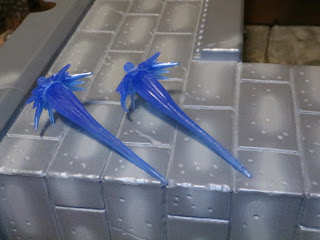 * Hologram Iron Man also comes with two of the repulsor blasts which most Iron Man figures have included over the past few years. They're cool pieces which can plug into his palms or into the bottoms of his feet. The flare effect on the bottom is also available should you want a straight beam for any reason. 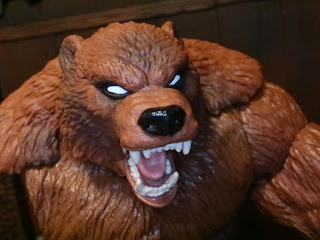 * Originally there were only two figures I wanted from this series: Ironheart and Ultron. When I saw Ursa Major, however, I knew I was going to be picking up some figures I hadn't planned on buying. Hologram Iron Man comes with Ursa Major's head which looks pretty cool. I'm not finished with Ursa Major yet but when I do you know I'll be reviewing him. 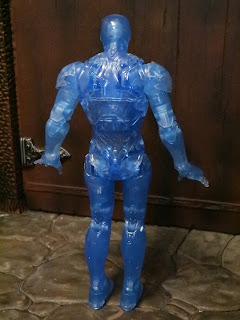 The Negatives:
* Hasbro didn't give Hologram Iron man any of the cool white paint highlights on his armor so from the back he's just solid blue. It's kind of disappointing since those paint highlights are the only thing that give the details of the figure any definition. 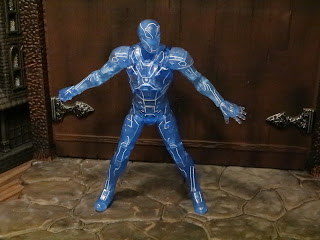 * Some of the joints on this Iron Man have a very limited range of motion, particularly the shoulders and the ankles. They're very limited and make getting this guy into some poses quite tough. See Iron Man's shoulders? That's as high as you can raise them. 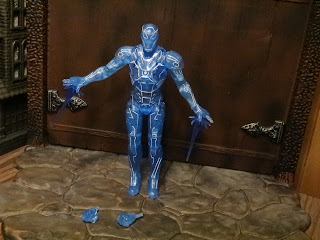 Hologram Iron Man is perfectly average. He's one of three Iron Man figures in this series, he's a variant that I doubt too many folks were clamoring for, and he feels kind of half done with some limited movement and no paint applications on the back of the figure. He's still fun, don't get me wrong, as the translucent blue color looks cool and the repulsor blasts are fun. No one is buying this figure to have a Holographic Iron Man, though; they're buying this guy to complete Ursa Major. With Xemnu I felt like every figure was well worth picking up but this series had a few figures I had to force my self to buy. This guy is Good but only for someone who needs every Iron Man out there.
Looking for more figures of Iron Man? The check out my reviews of the Marvel Legends' Classic Iron Man and Heroic Age Iron Man and the Marvel Legends Series Tony Stark (A.I.).
For more Marvel Legends Series reviews check out the following:
Marvel Legends Series by Hasbro (2016)
Enchantress (Mystic Rivals)
Firestar
M.O.D.O.K.
Nico Minoru (Mystic Rivals)
The Punisher