Action Figure Review: Battlefield Warriors from Masters of the Universe Origins by Mattel 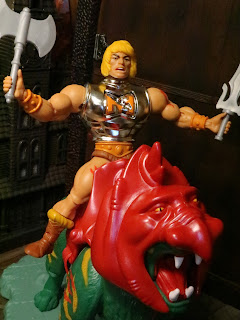 Target has another Masters of the Universe Origins exclusive set on shelves right now (well, theoretically) and it's a monster of a set! The Battlefield Warriors set includes battle-damaged variants of Battle Armor He-Man and Battle Cat, two figures we've seen previously, and a cool new display base with some little gargoyle creatures hanging around. Drawing inspiration from the beloved open boxed "gift sets" of the 1980s, Battlefield Warriors definitely makes for an impressive set. Let's take a look at this set after the break to see what's new with Battle Armor He-Man and Battle Cat... 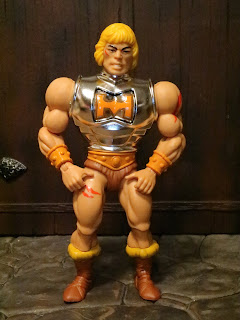 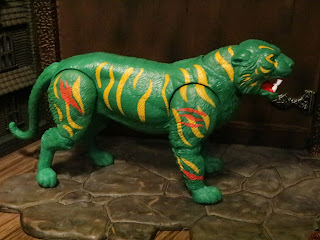 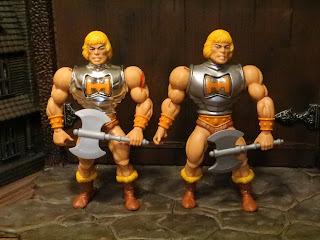 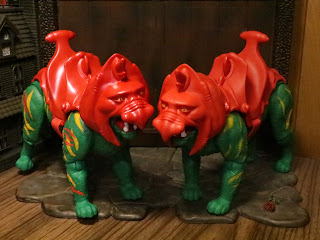 Comparison: Battle Cat
* And what's different about the Battlefield Warriors Battle Cat from the standard Battle Cat? Battlefield Battle Cat has some bloody paint marks on his fur and armor that's a deeper red with a bit of a metallic look to it. It's a good look! 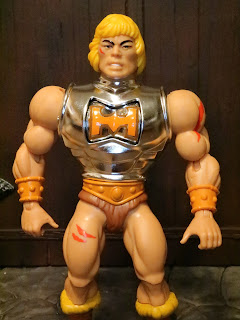 The Positives:
* It's tough to criticize this design as it's just so iconic to me: I prefer the look of the silver battle armor over the classic He-Man outfit and the vac-metal look is really impressive. Seriously, Mattel did a good job here and the vac-metal seems very well applied with no flaking. He-Man's wrist cuffs and belt are a bit more subdued here than on the basic He-Man release and I think they tend to look better. I love the printed "H/M" logo on his armor, too, as it's a great translation of the original. The segmented bits of the armor and the shiny look of the plastic really sell the effect and the blood effects, while basic and just painted on, are kind of cool. 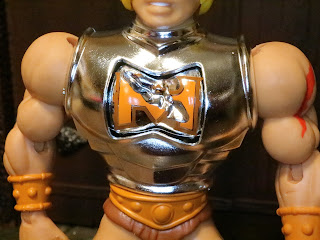 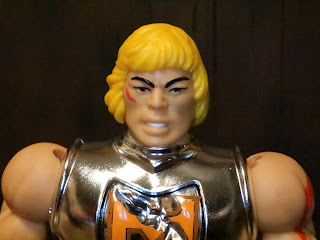 * I think Mattel redid the vintage styled head as this looks way better to me than the vintage head from the SDCC 2019 2-pack. It's a pretty good likeness of the original He-Man figure with much better colors for the skin and the hair. He's also got a bloody mark on his right cheek. His blood or someone else's? You decide! 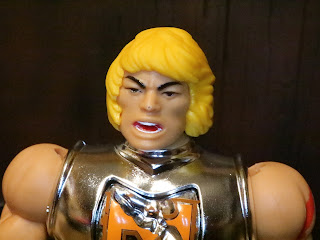 * He-Man comes with a second portrait that I like even better than the first. It's another vintage inspired head but this time He-Man's clearly letting out a battle cry. His hair is more windswept as well and, man, does it look cool or what? I love this portrait! 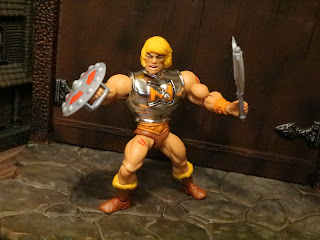 *  The MOTU Origins figures are built like the vintage toys but with modern articulation. While their bulky frames make the articulation a bit clumsy, they do feel like an evolution of the vintage line. Imagine what you would get if you mixed a vintage figure with a MOTUC figure. They're quite fun to play with and they feel very sturdy.
* They're also modular and can be easily separated to make your own lazy boy customs! The arms don't separate on this one but the other standard parts do (head, wrists, torso, and boots). 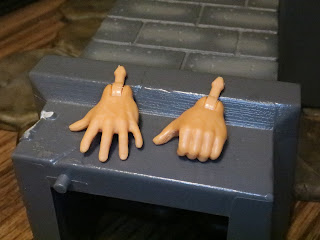 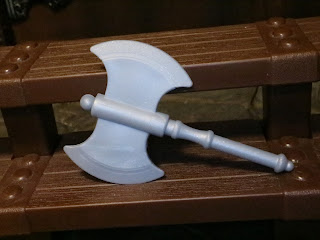 * Battle Armor He-Man comes loaded with goodies and first up is his axe.  It's the same mold we've seen on the standard He-Man figure but it's now molded in a light silver with metallic flecks in it. I really like how these turned out as the reflection gives it a nice shimmering effect. 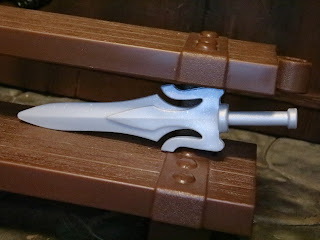 * The second weapon is the Power Sword. It's the minicomic/ Alfredo Alcala styled sword and it's a full sword this time rather than a half sword. It fits perfectly in He-Man's hands and looks great with the silver color flecked with metallic bits. 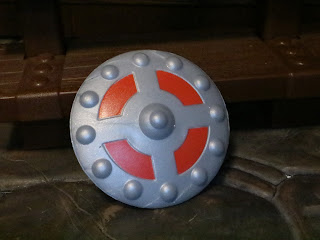 * Third up is He-Man's shield. Again, we've seen this mold before but now it's silvery and flecked with the little metallic bits. 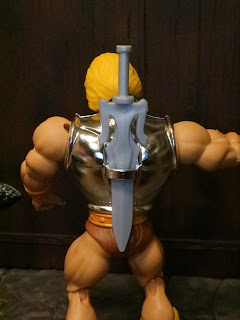 *  Need a place to stow the Power Sword when He-Man's too busy punching or using his axe? Since this is a variant of the standard Battle Armor He-Man he has the simple storage loop for the Power Sword on the back of his Battle Armor and it works really well. I love fun little stuff like this! 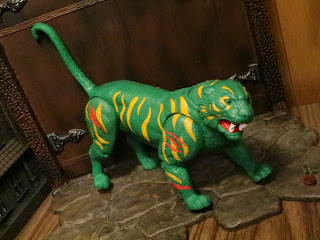 * Battle Cat is almost always a cool looking toy and this one does capture the look of the classic toy with a bit more fur texturing on it. He's nice and bright and the painted on "battle damage" does add a nice splash of color. Painted on streaks probably wouldn't look good on most other toylines but the old-school sensibilities of this line definitely make it a fitting way to handle battle damage.

* Cringer's got some moves! Hear that music playing? That's just his meow mix, baby! OK, yeah, he definitely looks like he's dancing in the picture which I didn't intend when I took it. He is articulated, though, something that hasn't always been a staple of Battle Cat figures. You can have some fun with this one, especially with his mobile head, tail, and legs. 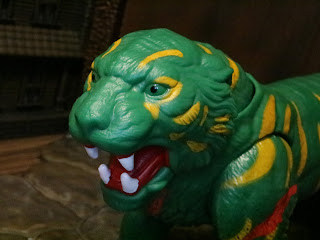 * Cringer's headsculpt is pretty nifty, too (I always want to call him Cringer when he doesn't have his helmet). Plus, he now has a hinged jaw so you can have him battle. Or talk! Or eat! Both Battle Cat and Cringer love all of those things, so there's really no wrong way to play with him. 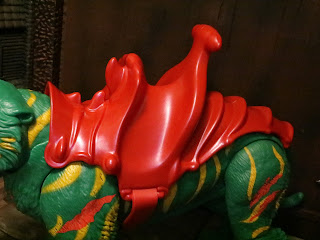 * Battle Cat's saddle is very close to the original figure but in this set the color is even more accurate than the original Battle Cat.  It's a very deep red with an almost metallic hue to it. Very nice stuff! It looks great and He-Man sits on it solidly. 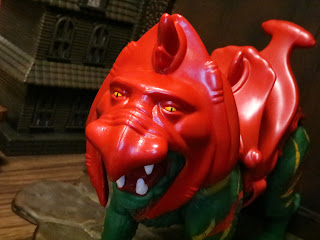 * Battle Cat's helmet also benefits from the new color choice. Like the other releases it still fits over his head and definitely makes him look way fiercer. I also really like the way that his eyes are painted on the helmet. I think of it as Filmation inspired detail though it's certainly something seen in the earliest minicomics which is where much of  this line's inspiration seems to come from. 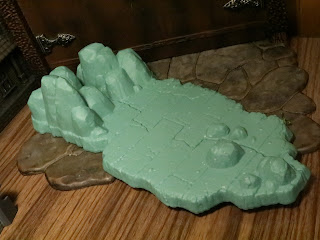 * So far everything we've looked at from this set has been repainted/ reused from other releases. How about we look at something new? First up is a battlefield for our Battlefield Warriors to Battle on. It's a rocky display base molded in Grayskull green. It's made from two separate pieces and while it doesn't have any paint applications it does look petty cool with He-Man and Battle Cat on it. We don't see stuff like this much so I'll take it. Early information seemed to imply that it actually attached to Castle Grayskull but I don't believe it really physically connects to it. It's more of a nice matching color for the larger set. 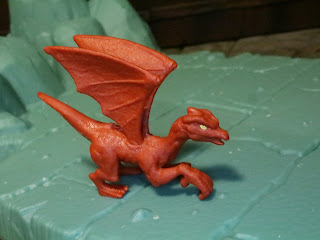 * What's really cool is this little gargoyle! He's a super little minifigure with claws that allow him to climb on enemies or scale the walls of Grayskull. It's pretty fun to have some little creatures roaming around to help flesh out the world of Eternia. This little guy is sporting wings! 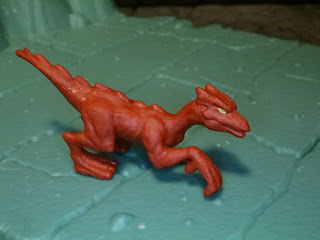 * But sadly, his friend is not. This little gargoyle doesn't have any wings. He's still kind of neat, though. Imagine these little guys pestering He-Man and friends during battle! Or maybe they help out the heroes against the Evil Warriors? 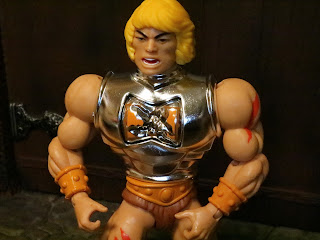 The Negatives:
* There's just something really off about He-Man's shoulders. The arms seem to be the same as the arms on any other MOTU Origins figure but the torso makes them look so awkward here. Is anyone else seeing this or is it just me? I noticed this on the standard Battle Armor He-Man and it kind of bugs me here, too. 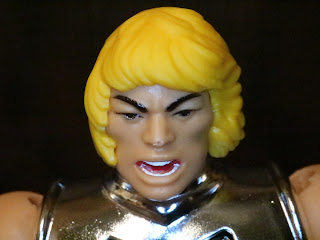 * My He-Man has a small blemish on his nose. It's not terrible but just a weird QC issue, something that pops up too often in this line. 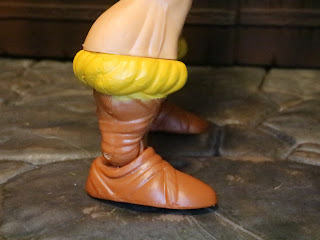 * I've noticed lately that so many of the Origins figures have messy paintwork on their boots. Seriously, Mattel: Get this stuff cleaned up! 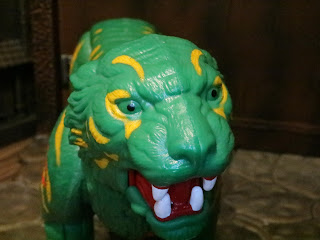 * Like on the standard Origins Battle Cat I wish this guy had a painted black nose and painted eyes. It seems like a missed paint application, doesn't it? 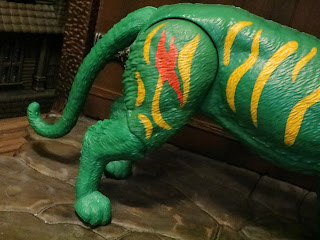 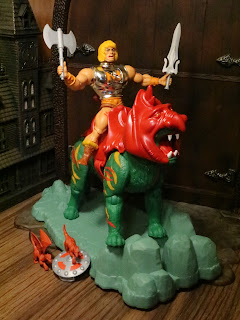 I really like this set quite a bit although I don't think it's going to win over anyone who doesn't enjoy Masters of the Universe Origins and the unique feel of the line. You're getting a special variant of Battle Armor He-Man and Battle Cat with a new diorama piece and some gargoyle minifigures. It's not the best MOTU set ever but it's still quite fun. It's also in a pretty amazing box with some impressive packaging art. It's seriously some of the best MOTU art I've ever seen. Battle Armor He-Man is definitely the strongest part of the set. I still think the Origins Battle Cat needed better articulation but the improved armor looks great here. I love the metallic red! Throw in the little gargoyle guys and this is a Great set. If you know someone who loves MOTU, particularly a kid, this would make a pretty darn impressive gift. There's a lot of play value and adventure to be had here. It would be nice if Mattel could tighten up some of the paintwork on this line. Still, it's been fun seeing Origins come into its own this year with some new and unique ideas for the line.
I've reviewed so many action figures of He-Man/ Prince Adam that he has his own review archive. Check out Fabulous Secret Powers for all of my reviews of the most powerful man in the universe!
I love Battle Cat/ Cringer and I've reviewed a few other Battle Cat toys: The Masterverse MOTU: Revelation Battle Cat, the M.U.S.C.L.E. Battle Cat, the VYNL Prince Adam and Cringer, the Pint Size Heroes Battle Cat, the ReAction He-Man and Battle Cat, the Mega Construx Battle Cat Vs. Roton set, the POP! Rides He-Man on Battle Cat #84 and the Battle Cat on the He-Man POP! Tees shirt, the Hot Wheels: Monster Trucks Battle Cat, the MOTU Colorforms Deluxe Play Set, the Masters of the Universe Origins Battle Cat, the Geeky Tikis Battle Cat, and the Loyal Subjects' Battle Cat and Battle Cat (Flocked).
For more Masters of the Universe Origins reviews check out the following:
Battle Armor He-Man
Battle Cat
Beast Man
"Buzz Saw" Hordak
Castle Grayskull
Clamp Champ
Evil-Lyn
He-Man
He-Man and Prince Adam 2-Pack
Hordak
Land Shark
Lords of Power
Man-At-Arms
Man-E-Faces
Mer-Man
Ninjor
Orko
Panthor
Panthor (Flocked)
Prince Adam & Sky Sled
Ram Man
Rise of Evil
Roboto
Scare Glow
She-Ra
She-Ra (PowerCon Exclusive)
Skeletor
Stratos
Teela
Trap Jaw
Tri-Klops
Zodac