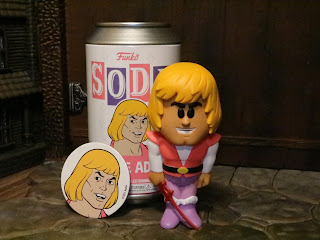 Funko's FunKon 2021, their summer convention branding for another year where almost no major conventions were held, had a few Masters of the Universe exclusive items and the first one I've managed to get my hands on is Prince Adam from Vinyl SODA which was shared with GameStop (my Toy Tokyo order is finally shipping as I type this as well). I love how colorful the Vinyl SODA figures are and Prince Adam looks incredible in this style. He's such a fun character! Do you prefer your Prince Adam to basically be He-Man in fancy clothes or do you prefer Adam to look younger and scrawnier than He-Man? It's one of the eternal MOTU questions that fans wrestle with. I've always loved Prince Adam's characterization in the Filmation series but I really liked how the Mike Young Productions series and MOTU: Revelation handled the character, too. I thought it was quite cool how Adam chose to retain his regular appearance in Preternia rather than his He-Man appearance in Revelation. While He-Man has the Power, Adam's heroic character and humility are what really define the character. Let's take a look at the Vinyl SODA Prince Adam after the break... 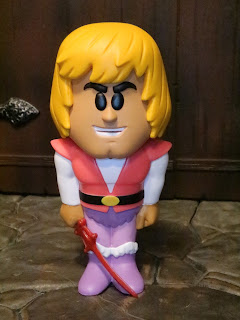 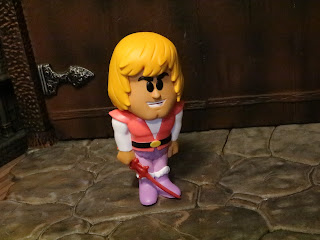 The Positives:
* Prince Adam has a similar pose to He-Man but he's a very different figure who even has a different haircut. Slightly different, anyways. These figures have a style of their own and are quite comical. They're not as stylized as most of Funko's other vinyl lines and they're not articulated at all, either. They do make for a cool display piece and their bold, colorful appearance makes them look amazing on display. 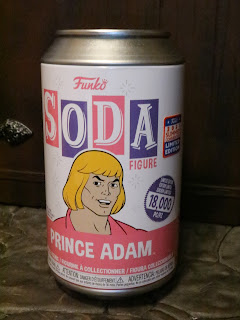 *  I'm a big fans of the cans these come in! The soda can design is so incredibly cool and makes for a rather unique display piece on a shelf. Prince Adam soda would be something light, sweet, and refreshing like a strawberries and cream soda. The can displays all of the expected labels while the back shows off the figure and includes all of the legal info, etc. The top of the can separates so you could use the can to store trinkets as well, and it's even sculpted to look like the top of a soda can. It's made from a much more durable metal than your average soda can, too, so it's quite a nice collectible. At 18,000 pieces I believe this is the highest produced MOTU Vinyl SODA figure yet. 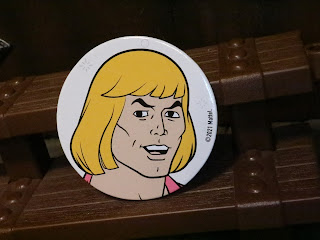 * Inside the can is a round, sturdy cardboard disc. It's kind of like a POG, though a bit larger. On the front is Prince Adam's grinning mug while the back has the figure's name and the edition size. 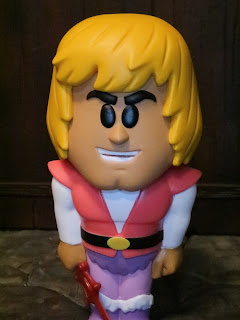 * The colors are just so bright and vibrant on Adam that you can't help but smile. This is such a fun piece! The sculpt is nice and captures all of the details of his costume while the paintwork is very crisp and clean. 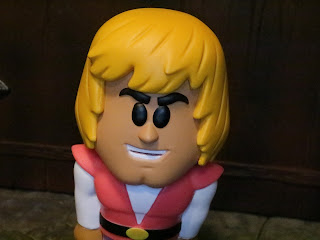 * While the head looks like the same person as He-man, the portrait is entirely different from the Vinyl SODA He-Man. Adam's smiling with larger eyes and his hair is better. I like this look better than He-man's hairdo for sure. 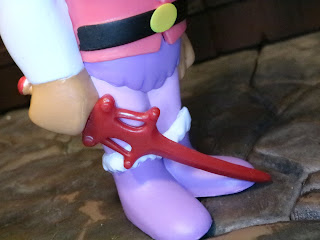 * Prince Adam is toting around the Power Sword in his right hand and it's maroon colored, just like the vintage toy!
The Negatives:
* The Power Sword tip kind of rests on the ground, causing it to bend a bit. Be careful with that sword, Adam! 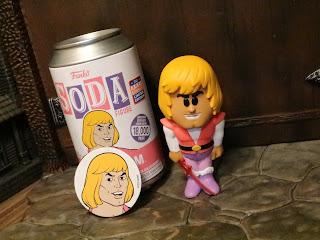 Prince Adam is another Great addition to this line. They don't have articulation nor do they come with any actual accessories but there's just something about this line that I absolutely love. It's such a great match for Masters of the Universe. Prince Adam is a fun figure and if you check your nearest GameStop you still might find him in stock. With 18,000 of these made this seems like the easiest MOTU Vinyl SODA to fine so far. 3,000 of those are a metallic variant so good luck if you're trying to track that one down! Your chances are better than on most of the previous chase variants!
He-Man/ Prince Adam is one of my favorite characters and I've reviewed so many toys based on him that he has his own review archive. Check out Fabulous Secret Powers for more He-Man toys!
For more Vinyl SODA reviews check out the following:
Battle Mode Kobra Khan
Count Chocula
Disco Skeletor
Faker
Franken Berry
Fruit Brute
He-Man
Kobra Khan
Man-At-Arms
Mer-Man
Moss Man
Scare Glow
She-Ra
Skeletor
Spikor
Trap Jaw
Yummy Mummy
Posted by Barbecue17 at 9/30/2021