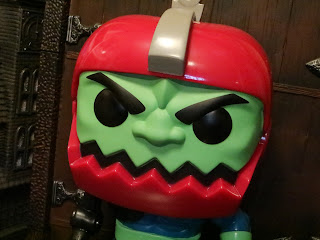 Sometimes you pick up a new garden variety POP! vinyl. You know, one of those little 4-inch pop culture vinyl toys that stand neatly in ever-growing clusters on your bookshelves, TV stands, and mantles. Somedays, however, you pick up a massive POP! vinyl that would win a ribbon at the county fair. The new 10-inch scaled Trap Jaw #90 from Funko's POP! Retro Toys: Masters of the Universe range is one of those giants who you'll have to dedicate some serious space too. He's quite cool, though, and part of the newest wave of Funko MOTU releases. He's been out for a month or two at this point but you can still find him. Trap Jaw was released previously when Masters of the Universe stuff was released under the POP! Television banner (Trap Jaw #487) but this new oversized POP! has an updated sculpt that's quite a bit more expressive. Ready to check out the 10-inch Trap Jaw? Then join me after the break... 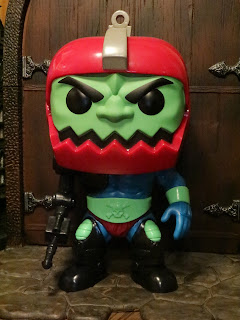 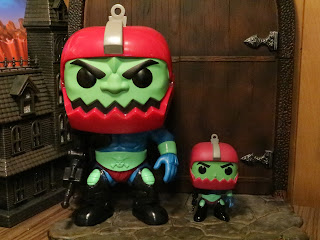 Comparison:
* Here's a quick comparison between the giant Trap Jaw #90 and the 2017 Trap Jaw #487. The sculpts are completely different and the giant figure has a bit brighter colors on the helmet and his face. His body is more detailed as well with the cords and wires on his arms being present. 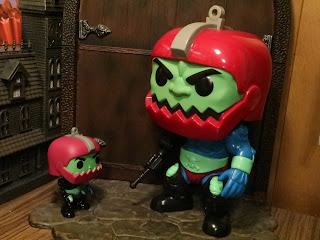 The Positives:
* The oversized POP! figures are quite impressive. While they're just a bit under 10 inches talll, they feel so much larger due to how wide and chunky they are. They look fantastic on display and really have a lot of character. POP! vinyls aren't usually known for their sculpts but it's impressive how nice they look in this larger scale. 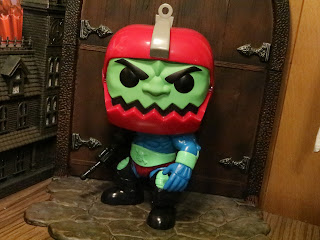 * Trap Jaw looks awesome. While the previous figure seemed to be a weird mix of the Filmation simplicity and the vintage toy this version of Trap Jaw is straight up based on the vintage toy. The colors are perfect and remind me of getting Trap Jaw for Christmas one year as a very young child. His colors just really stood out to me! Like standard POP! vinyls his head swivels so you can pose him a bit. 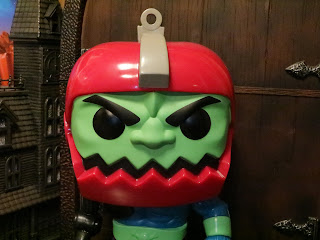 * The headsculpt is the best difference in this sculpt from the previous figure. I love that Trap Jaw looks angrier and that you can see his mouth! The previous figure had a more neutral face but this ne just has more character. of course his helmet is huge as is the loop he can use to slide down ziplines with. That's a terrible idea, by the way. Anyways, you could use a pretty thick cord and have this massively heavy Trap Jaw do some hardcore ziplining if you wanted to. 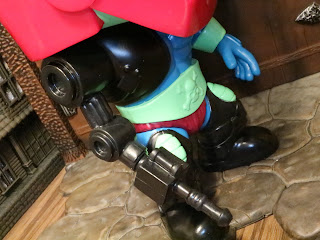 * Check out that robotic arm! Trap Jaw's laser cannon arm is my favorite of his attachments and love how it looks here. It's so cool and boxy. 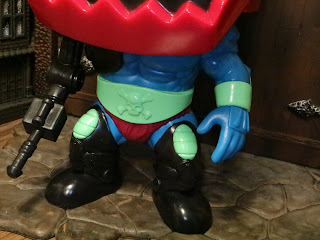 * He's got all of the details tat the vintage figure has: Cool boots, wires on his arms, and the pirate inspired skull and crossbones belt. It's Trap Jaw's go to look; what more is there to say? 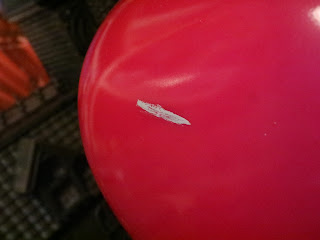 The Negatives:
* My only complaint is that there was a weird paint streak on Trap Jaw's helmet. It's the gray paint used on the ridge and loop from on top of his helmet so it's just some errant slop. Still, kind of frustrating. 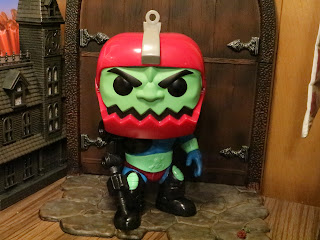