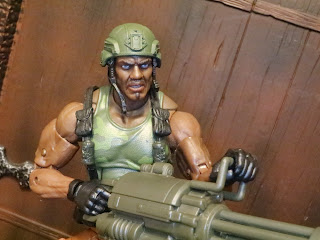 It's been a little over a year now since the G.I. Joe Classified Series launched and while the Snake Eyes movie just kind of came and went it seems that Hasbro still has a hit on their hands with the action figures. While the earliest figures seemed to have some modern videogame inspired designs (many collectors compared them to the Fortnite characters) the more recent offerings definitely seem to draw more inspiration from the vintage G.I. Joe: A Real American Hero toyline. The best evidence to show Hasbro's evolution with this line is the subject of today's review, Heavy Artillery Roadblock. Released as an Amazon.com excusive, Heavy Artillery Roadblock is based on the character's v1 action figure from 1984 and, interestingly, he doesn't even look like the same person as last year's series 1 Roadblock or the Cobra Island Roadblock. Usually I'm not a fan of action figure lines making the same character look like two different people but here I'm going to give it a pass as Heavy Artillery Roadblock is a major improvement over those previous figures. While I'm a bigger Masters of the Universe fan, G.I. Joes were some of my first action figures as a kid (probably my first). Collecting vintage G.I. Joes helped me through some tough times as a middle schooler, G.I. Joe: Sigma 6 got me back into toy collecting as an adult, and during my Covid-19 isolation last month when I was quarantined away from my house and family guess what I managed to have with me? My G.I. Joe Classified Series collection! Seriously, I have an emotional attachment to these figures at this point due to the long 10 days we spent together. I had a lot of time to mess around with these so listen to my expert opinions on Heavy Artillery Roadblock after the break... 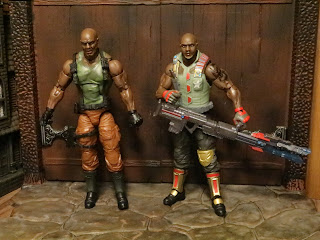 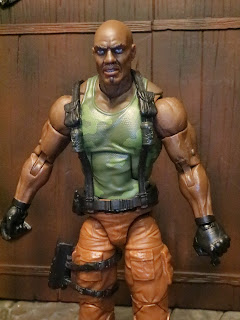 The Positives:
* Roadblock looks awesome in a simple outfit inspired by the vintage toy. He's wearing a camouflaged tank top, reddish brown cargo pants, and some webgear with a few pouches and some grenades (which do get a paint hit). The webgear is a separate piece but it's not removable. The paintwork is nice and clean here and the clothes have great textures on them. 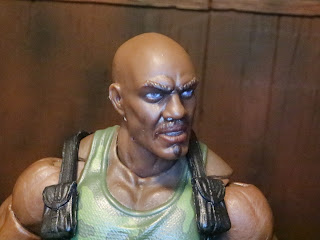 * The headsculpt definitely looks more like the traditional depictions of Roadblock. He's got some great facial hair and a look on his face that should make even the most grizzled Cobra veteran urinate in his trousers. Roadblock's stare is the best in the line! 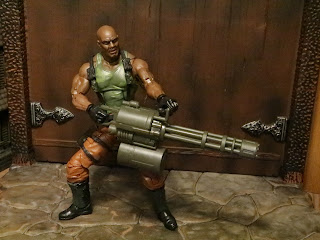 * Roadblock has excellent articulation and he can hold his massive minigun with ease. Seriously, he looks awesome in so many poses. He's as well articulated as the previous Roadblock figures in the line but without the vest that limited some of the torso movement of the first version. 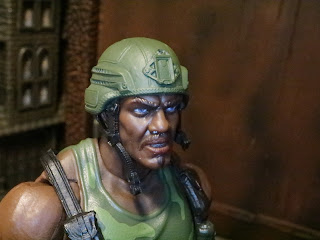 * The vintage Roadblock figure came with a helmet and the new Heavy Artillery Roadblock does as well. It's an excellently sculpted piece with lots of detail that gives it a very modern look and feel. The straps are sculpted to hang down, so they don't actually function, and it looks really cool the way it is. It fits Roadblock perfectly. 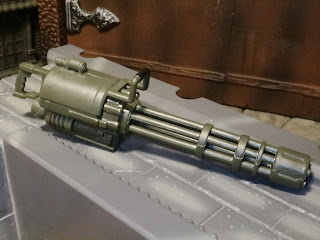 * Roadblock's weapon appears to be a minigun of some sort which seems like a logical update from the .50 Browning the original figure toted around. The barrels rotate and there's a grip and a handle so he can hold it with ease. It's a huge, impressive accessory. There are also holes in the barrels so you can place compatible firing effects into them if you have some around. 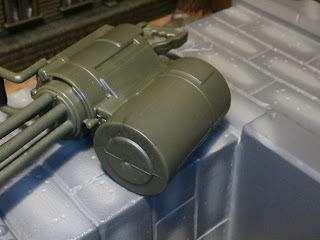 * There's an ammo canister that slides onto the weapon. It actually would have been cool if Roadblock had a backpack to carry an extra canister, kind of like how the vintage Roadblock's backpack held a box magazine for his Browning. 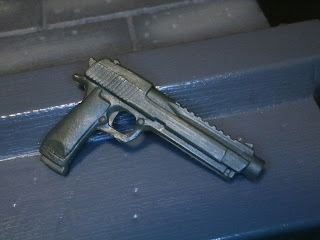 * Roadblock also has what looks like a .50 caliber pistol. It's a great sculpt that fits his larger hands nicely. There's a hole in the barrel of this weapon as well and, if you want, you can place the suppressor from the movie version of Baroness on this weapon. 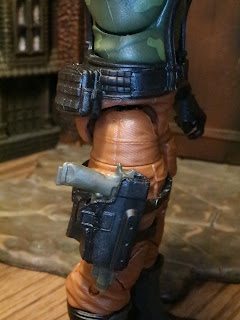 * Roadblock has a removable holster on his right hip to tote around his pistol. The pistol fits perfect in here and the holster itself looks really cool. 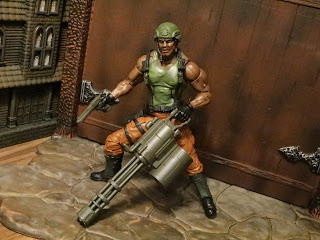 Overall Heavy Artillery Roadblock gets a Great and a 1/2 rating from me. He's an incredibly fun figure with quite a nice complement of accessories. A backpack would have been nice for maybe storing an extra cylinder for his weapon but it's tough to argue with what Hasbro did hear. I don't want to see too many redos like this in the future as I want to line to grow with new characters but this figure was worth it. Roadblock is one of the most fun figures in the line and even with the recent price hike you'll still feel like you're getting your money's worth.
If you're a fan of Roadblock, AKA Marvin F. Hinton, then check out my review of the series 1 G.I. Joe Classified Series Roadblock and Roadblock (Special Missions: Cobra Island).
For more G.I. Joe Classified Series figures check out the following:
Arctic Mission Storm Shadow
Baroness with Cobra C.O.I.L.
Baroness (Snake Eyes: G.I. Joe Origins)
Cobra Commander
Cobra Commander (Regal Variant)
Cobra Infantry
Cobra Trooper (Special Missions: Cobra Island)
Cobra Viper
Destro
Duke
Firefly
Flint
Gung Ho
Lady Jaye
Major Bludd
Profit Director Destro
Red Ninja
Roadblock
Roadblock (Special Missions: Cobra Island)
Scarlett
Snake Eyes
Snake Eyes Deluxe
Wayne "Beach Head" Sneeden
Zartan
Posted by Barbecue17 at 9/24/2021