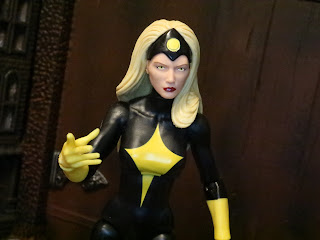 Today I'm checking out another figure from the recent Iron Man themed Marvel Legends Series with the Ursa Major build-a-figure series and this time it's Darkstar. I'm going to flat out admit that I have no idea who Darkstar is. Apparently she's been part of the Winter Guard, the Soviet Super-Soldiers, the KGB, and the Champions of Los Angeles. I'm familiar with a couple of those groups but I'm just not familiar with Darkstar. No disrespect to the character (who has been around since 1976) but I only bought this figure to complete Ursa Major. This is one of the very few Marvel Legends figures I've ever purchased to complete a build-a-figure but at the time I picked her up it was more expensive to purchase Ursa Major's torso by itself than it was to just buy the figure. Still is, too. Let's check out Darkstar after the break... 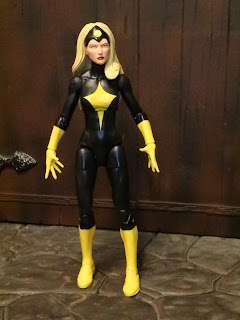 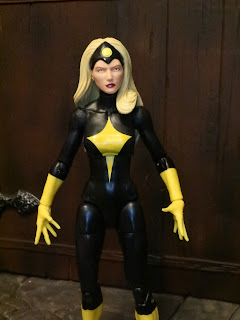 The Positives:
* Darkstar is a pretty basic Marvel Legends figure: Basic body that we've seen multiple times, a painted on outfit, and a new headsculpt. I'm sure there are plenty of fans of this character who have been waiting for this figure for years and if I had a better knowledge of the character I'd probably be more excited. That being said, she fits in just fine with the rest of your Legends and the paintwork is neat and clean. That's a real feat when you're talking about black and yellow, too. She does look quite sharp. 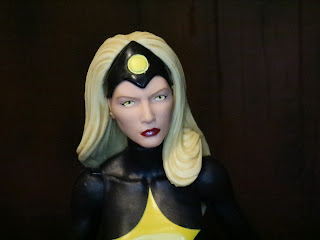 * Laynia Sergeievna Petrovna Krylova, AKA Darkstar, has a nice headsculpt. She looks tough, determined, has a steely gaze, and great hair. The paintwork is excellent here. There's even some subtle drybrushing on her hair to bring out the detail and add some depth. 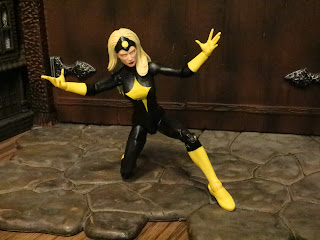 * Darkstar has a basic body sculpt and all of the standard articulation is here. These are always really fun, really well articulated action figures and you should be happy with Darkstar's range of motion. 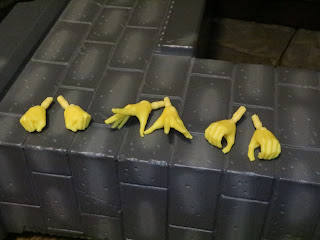 * Darkstar doesn't come with any true accessories for her to use but she does have six interchangeable hands: A pair of fists, a pair of gesturing hands, and a pair of standard grips. They swap in and out easily so you should have some nice options when posing her. 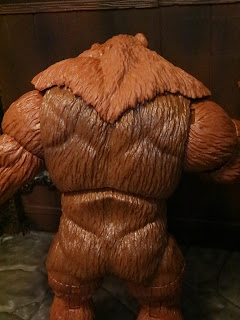 * Originally there were only two figures I wanted from this series: Ironheart and Ultron. When I saw Ursa Major, however, I knew I was going to be picking up some figures I hadn't planned on buying. Ironheart comes with Ursa Major's right leg. I'll get around to reviewing the giant bear as soon as I can ( I have him completed and he's awesome!). Darkstar comes with the torso which is split into three pieces: The front, back, and a extra fur piece for the neck. 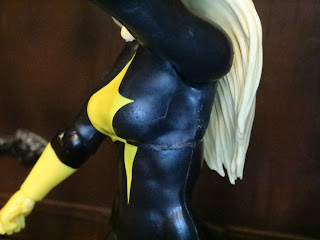 The Negatives:
* The left side of Darkstar's torso looks really funky. Like something happened with the mold or the plastic. It's kind of odd looking. Like something got deformed or melted. 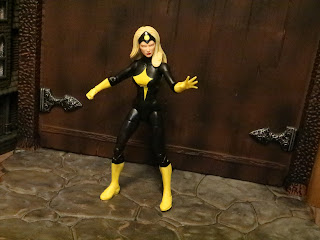 Darkstar is a Good figure, which means I'm giving her a solidly average rating. There's nothing truly wrong with the figure (well, other than the weird warped side on my figure) but she doesn't stand out, either. I picked her up to build Ursa Major and I imagine many other folks have done the same. She's probably the most boring figure in this series which to me has a few boring figures in it. They can't all be winners but that doesn't mean that Hasbro didn't give this figure a good effort. Maybe if she has some sort of effects piece or something showcasing her Darkforce energy constructs? That would have probably elevated her quite a bit.
This is the first figure of Darkstar I've reviewed. For more Marvel Legends Series reviews check out the following:
Marvel Legends Series by Hasbro (2016)
Enchantress (Mystic Rivals)
Firestar
M.O.D.O.K.
Nico Minoru (Mystic Rivals)
The Punisher