Toy Review: He-Man and Wind Raider & Skeletor and Land Shark from Hot Wheels Premium: Masters of the Universe by Mattel 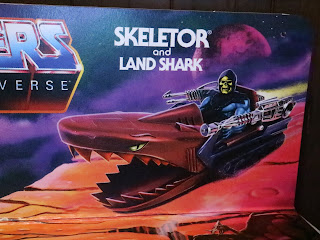 On July 22nd, 2021 Mattel put two items on its Mattel Creations website that were probably intended as SDCC 2021 exclusives: The Masteverse Scare Glow from Masters of the Universe: Revelations and the Hot Wheels Premium 2-pack of He-Man and the Wind Raider and Skeletor and the Land Shark. My Hot Wheels set arrived back in August (while my Scare Glow only arrived on Saturday!) and I've had it sitting here for a moment. So, what's the big deal with this set? Honestly, it's a repack of the previously released Wind Raider and Land Shark Hot Wheels Premium vehicles in new packaging with a die-cast He-Man and Skeletor in the respective vehicles. Honestly, it's not that big of a deal but since I was grabbing Scare Glow I went ahead and grabbed this set too. Let's take a look at this one after the break... 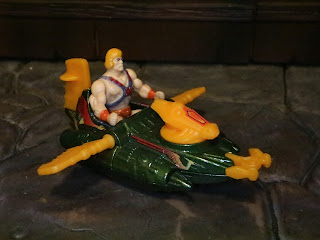 The Facts: He-Man and Wind Raider 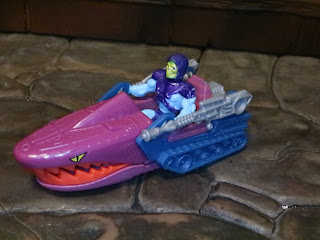 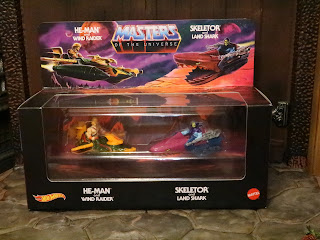 The Packaging:
* The packaging for this set is probably the biggest draw. It's a very vintage inspired window box with some great art on the front. It's fairly collector friendly, too, as all you need to do to open the package and remove the figures is cut a piece of tape. 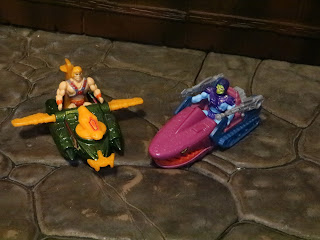 The Positives:
* Inside the package you're getting a Wind Raider and a Land Shark that are pretty much identical to the previous releases with the exception of the new die-cast metal pilots. These are really cool vehicles and I really loved their single carded releases. 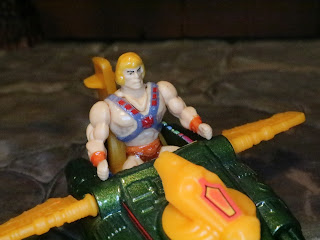 * The He-Man and Skeletor pilot figures are non-removable but they look really cool in the vehicles. They're nicely painted, especially considering how small these are, and they look to be very inspired by the vintage toyline. 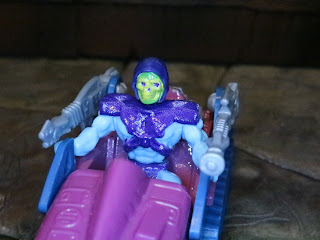 * Skeletor isn't as colorful as He-Man but he still looks pretty boss behind the wheel of the Land Shark. 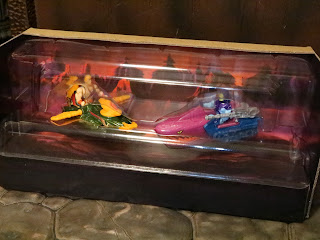 So... how is this set? It's a neat little set which is a con-exclusive so you expect a bit of a markup. But $35 dollars? These vehicles cost $5 each on their own in the already inflated Hot Wheels Premium line. Yikes! That's a $25 dollar markup for the exclusive tax, 2 diecast figures (which are non-removable), and packaging. There's nothing wrong with the set except the price, so I'm giving it an Eh and a 1/2. If you missed out on these two vehicles (though I've been seeing them both in stores more lately) or really love collecting MOTU stuff like this you won't hate it but it's tough to see where the money went. Into Mattel's pockets, that's where. I'm OK with convention items being a bit pricier due to low runs but this set pushes it.
I've reviewed so many action figures of Prince Adam/ He-Man that he has his own review archive. Check out Fabulous Secret Powers for more He-Man and Prince Adam stuff!
I've also reviewed so many toys based on Skeletor/ Keldor that I've given him his own review archive. Check out Snake Mountain for a plethora of Skeletor reviews!
Do you also love the Land Shark? Then check out my review of the Hot Wheels Premium Land Shark and the MOTU Origins Land Shark.
If the Wind Raider is your ride I've also reviewed the M.U.S.C.L.E. Wind Raider from Series 3, pack E, and the orange Wind Raider with He-Man, the Hot Wheels Wind Raider, and the Mega Construx Wind Raider Attack set.
For more Hot Wheels Premium reviews check out the following:
Battle Ram
Land Shark
Wind Raider