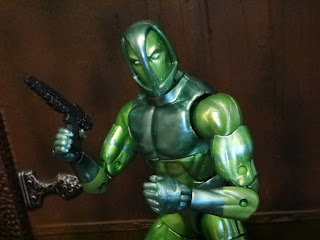 It's time for the fourth figure in my series of reviews of the new Iron Man focused Marvel Legends Series collection with the Ursa Major build-a-figure and today we're checking out the Vault Guardsman. This is kind of a unique figure because it can either be one of two Iron Man villains, Kevin O'Brien or his brother Michael O'Brien, or it can be one of the armored guardians who guard the Vault, a prison for supervillains. How many of these guys dos Hasbro want you to buy? While completing Ursa Major may have been the most prominent factor driving me to pick up the Vault Guardsman I did have interest in this guy as the character was an unreleased figure from Toy Biz's 1990s Iron Man toyline. I loved that line as a kid and while the Vault Guardsman figure never came out in the Iron Man line he did get released in the Spider-Man: Techno Wars series. I'm a sucker for Marvel Legends updates of figures Toy Biz released in the Iron Man line which is why I want a green skinned Mandarin, Blacklash, and Century. Let's take a look at the Vault Guardsman after the break... 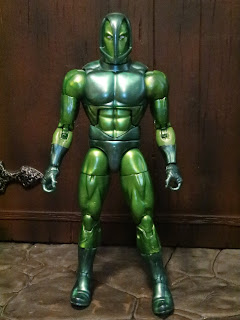 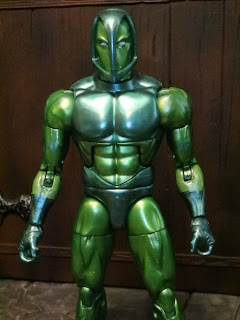 The Positives:
* The Vault Guardsman might be decked out in armor that Tony Star built but it's not as Flash as an Iron Man suit. It's definitely not just a standard body, though, as there are sculpted armored bits on his chest and waist. The figure is given two different shades of green to help show off his armored bits: A lighter green for the main suit and a darker green for the armored pieces. The colors look good and overall it's a pretty cool looking figure, if a bit basic. 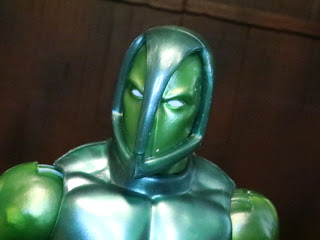 * The Vault Guardsman's helmet is interesting. It's made from two separate piece attached together. The light green full helmet and then a darker green armored piece that fits over it. It's an interesting looking design though you'd think that extra ridge in the middle would drive you crazy and obscure your vision. 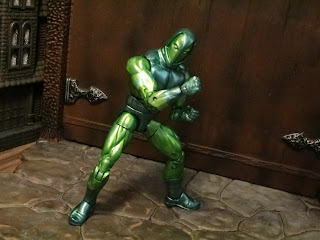 * The Vault Guardsman is a pretty basic figure so he's got all of the articulation you'd expect. He's sturdy, durable, and fairly fun to play around with. What more is there to say? His articulation isn't as smooth as most other modern Legends figures (some of the pieces might be a good few years old now) but it's still functional. 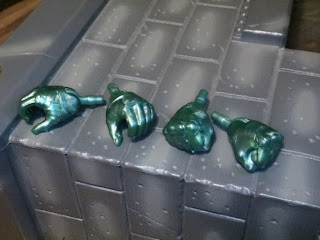 * The figure comes with four interchangeable hands: A pair of standard grips and a pair of fists. They swap out easily so you can add a little something extra to your poses. 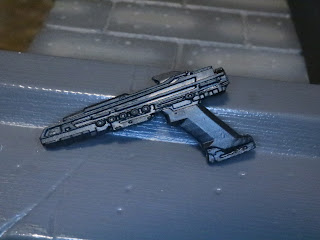 * To help keep the peace at the Vault the Guardsman comes with a very futuristic looking pistol. I'm sure we've seen this before with other figures but it's a nice sculpt that fits with someone keeping supervillains in line. 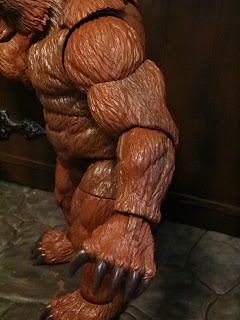 * Originally there were only two figures I wanted from this series: Ironheart and Ultron. When I saw Ursa Major, however, I knew I was going to be picking up some figures I hadn't planned on buying. I'll get around to reviewing the giant bear as soon as I can ( I have him completed and he's awesome!). The Vault Guardsman comes with the left arm. 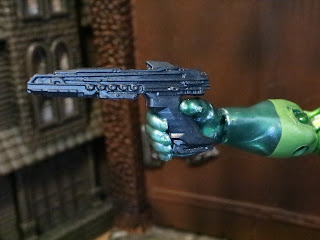 The Negatives:
* The Vault Guardsman comes with a pistol and interchangeable hands but guess what he doesn't come with? Trigger fingers. Yup, no pistol grips for this guy. It honest makes holding his weapon an awkward experience. That was a bizarre oversight on Hasbro's part for sure. 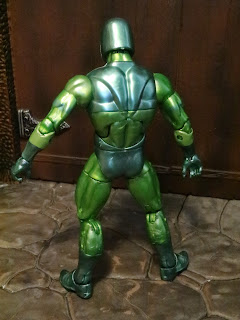 * I am really not a fan of the weird pearlescent plastic that Hasbro uses on some of their metallic Marvel Legends figures. The way it has visible swirls in it just looks really odd at this scale. I love the metallic green colors of this guy but those swirls are just major eyesores. 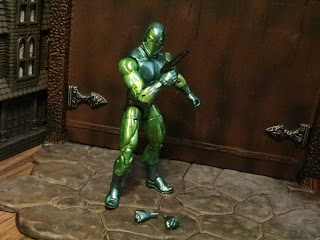 This guy actually manages to be the most dull figure in this series for me. He's actually getting an Eh and a 1/2. I was kind of excited about him originally but in hand he's just not that impressive. Maybe some better weapons, actual trigger fingers, and losing the weird, swirly plastic might have improved the figure but what we got is far below most Marvel Legends Series figures on the market these days. He's another figure I really just picked up to build Ursa Major and he's kind of a disappointment. Hopefully the next figure from this set will be a hit instead of a miss...
This is the first figure of the Vault Guardsman I've reviewed. For more Marvel Legends Series figures check out the following:
Marvel Legends Series by Hasbro (2016)
Darkstar
Enchantress (Mystic Rivals)
Firestar
M.O.D.O.K.
Nico Minoru (Mystic Rivals)
The Punisher