Toy Review: He-Man from POP! Tees: Masters of the Universe by Funko 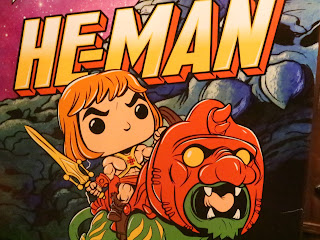 This is going to be a super quick review but I did want to make sure that I checked out the new Masters of the Universe POP! Tees sets from Funko. There is a He-Man set and a Skeletor set and I'm checking out He-Man first. These are Walmart exclusives (like nearly everything MOTU these days, it seems) and they're usually found in the electronics sections with the other Funko POP! items, typically in the larger Walmart stores that have the collectibles section with figures from NECA, Bandai, and McFarlane. At the Walmart where I found mine the POP! Tees were actually locked up in an electronics cabinet and at another one I saw them with the "spider wrap" anti-theft devices on them. Inside each box is a T-shirt and an exclusive glow-in-the-dark POP! vinyl. The POP! vinyl is a repaint of the recently released He-Man #991 so it's not a new sculpt or anything, but it is packaged in standard POP! packaging. It's still labeled as He-Man #991 but it has an "Only at Walmart" sticker and a "Glows in the Dark" sticker on the plastic window. These have been a bit difficult to find and after I saw them twice, I never saw them again. Hopefully more will trickle out over the next few months for those still searching for them. Let's take a look at the He-Man POP! Tees set after the break... 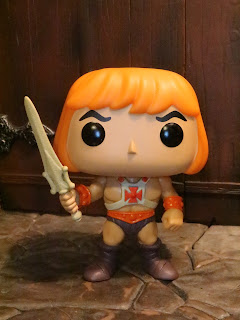 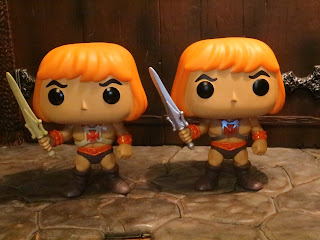 * On the left is the exclusive He-Man from his set while the original He-Man #991 is on the right. The original release is the better one, by the way. The glow-in-the-dark version has glow in the dark paint on his harness and on the Power Sword, rather than the standard colors on the regular release. Otherwise, he's exactly the same. 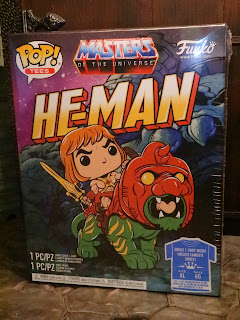 The Packaging:
* Here's a quick shot of the box so you know what you're looking for. The box kind of reminds me of a cereal box (it's shaped a bit differently) with colorful, splashy logos and the illustration of He-Man that is on the t-shirt. 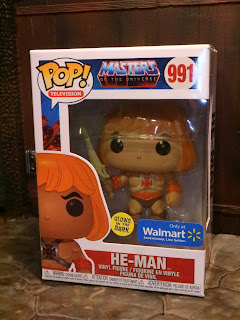 * Here's a shot of the packaged POP! that comes inside. I'll admit that I was nicely surprised that he has his own box. 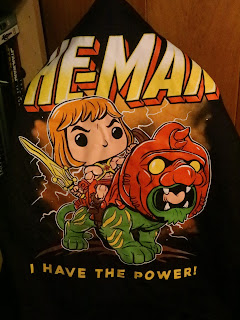 * While my guess is that most people buying these want the POP! vinyl, it's clear that Funko sees the t-shirt as the main selling point of the set. It's a pretty cool t-shirt. It's a bit louder than I like but I'll definitely wear it under button up shirts. I like the look on POP! Battle Cat's face and I love the lightning in the background. It also says "I have the Power!" which is definitely true. I have the power. I believe the shirt comes in both Large and X-Large though the ones I found were only in X-Large. It's probably going to be a bit big on me but maybe it'll shrink a bit in the wash. 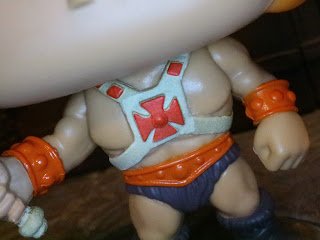 * He-Man's harness is oddly painted. The bottom right strap is colored differently than the rest of the straps and the look of the paint in general has kind of a weird, chalky look to it. 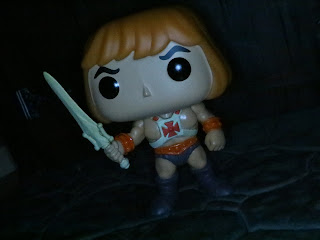 * He-Man's glow is quite weak. I let this guy soak up some light for quite a while and then turned off the lights. The glow was highly disappointing, especially considering that's kind of the point of this variant. 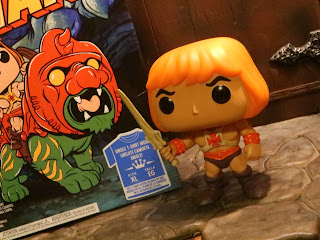 This set is $25 bucks, so with POP! vinyls usually running around $10 bucks at Walmart you're paying $10 for the POP! and $15 for the shirt. That's not too unreasonable as it is a very high quality shirt. I have a bunch of Star Wars Funko T-shirts from the Smuggler's Bounty boxes and they're really nice, high quality shirts, just as this one seems to be. The He-Man POP! is disappointing, though. Combined, I'd give this set a Good. If you're interested in the shirt, go for it. If you're just looking for a He-Man POP!, there are better ones out there.