Action Figure Review: He-Man on Battle Cat #84 from POP! Rides: Masters of the Universe by Funko 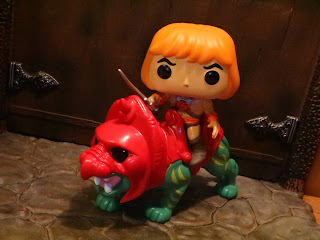 The latest series of Masters of the Universe POP! vinyls from Funko not only includes multiple standard figures and the 10 inch Skeletor but it also includes a POP! Rides release: He-Man on Battle Cat! I don't know that there is a more iconic 1980s toy pairing than He-Man and Battle Cat so putting these two together makes perfect sense. While He-Man has understandably been a staple for Funko,  Battle Cat himself has also shown up in some of Funko's other lines including Dorbz Rides, Pint Size Heroes, and VYNL. This is a pretty decent sized POP! and it's been shipping for the last month or two. Do you need yet another Battle Cat and He-Man for your collection? Find out after the break... 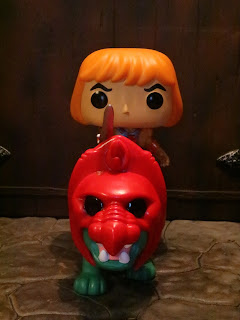 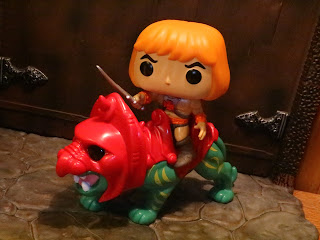 * With the top of He-Man's head reaching around 5 5/8ths inches and Battle Cat's body coming in at 7 inches long, this is a pretty decent sized POP! vinyl piece. It's quite sturdy, as most POP! vinyls are, and He-Man has the usual swivel head so he can look around. Honestly, this would make a pretty decent toy for a kid looking for a He-Man and Battle Cat to play around with. It also looks fantastic posed on your desk or on a shelf with the rest of the POP! denizens of Eternia. 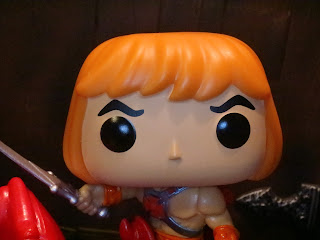 * So far as I can tell He-Man's headsculpt here is exactly the same as the headsculpt used on the  Battle Armor He-Man #562, He-Man #991, and He-Man (Slime Pit) #952. It's a great sculpt and a definite improvement over the original POP! He-Man. 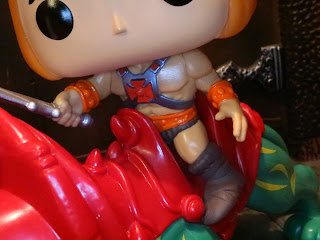 * He-Man is wearing his classic outfit which looks very similar to the recently released He-Man #991. Of course, he is posed differently as his legs are hanging over the sides of Battle Cats saddle. The paintwork is nice and clean and the colors look fantastic on He-Man's power harness and bracers. 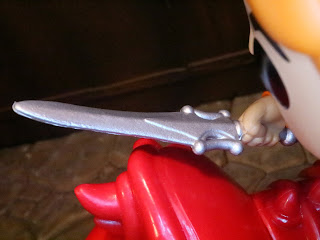 * Of course He-Man is toting around his Power Sword, holding it outstretched in his right hand. It looks great and has a nice silver paintjob to it. It's very Filmation inspired! 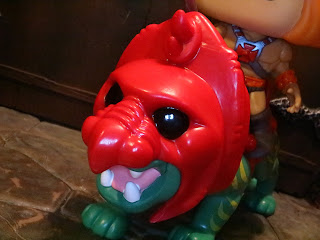 * Here's Battle Cat! Battle Cat has a simpler, POP! style (as expected) as well as the black POP! eyes poking through his mask. He looks pretty cool, really, with a fair amount of detail on his helmet. I love his sharp fangs, too! Who's an adorable kitty? Rawr! 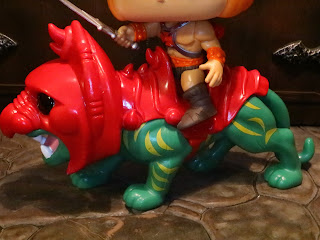 * Battle Cat's body looks fantastic. He's got muscles, a great battle ready pose, and a really nice saddle. I love how glossy it is. Yeah, the vintage toy was a darker red (almost maroon) but this bright red saddle is really eye-catching. And if there is anything you can say about this massive green and yellow striped cat wearing bright red armor, it's that he is eye catching. 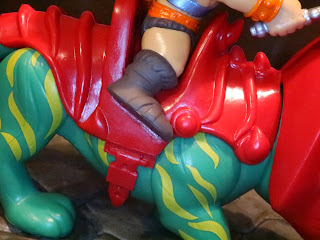 * Check it out! There's actually a strap across Battle Cat's belly, just like the vintage toy! You can even see the prong and the holes it can go through. Nice detail! 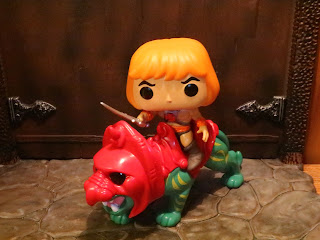 While the set is more expensive than your average POP! vinyl figure (which makes sense since it's quite a bit larger), He-Man on Battle Cat is also much more impressive than your average POP! release. I never get tired of this pair and Funko has released a Great and a 1/2 interpretation of these two. Everything is well done here and with Battle Cat in the game we now are steadily moving closer to a complete collection of the vintage MOTU characters. Do you think Funko will ever get that far? It would sure be nice, wouldn't it? I gotta ask, though: Why no Teela yet? The line has been going for seven years and we still don't have Teela!!!