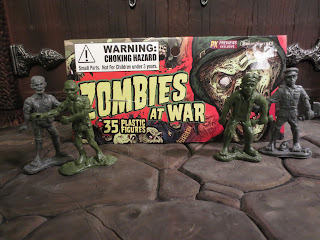 Since it's no secret that I love little plastic army men, minifigures, and zombies, it shouldn't come as any surprise that when I saw this bag of plastic zombie army men at Troll and Toad Games & Comics, a very neat comic shop in London, KY, I knew that I had to grab it! It's called Zombies at War and it's a set of 35 plastic minifigures produced by Brilliant Novelty Co./Spherewerx as a Previews Exclusive. The same folks released a set called Zombies Vs. Zombie Hunters a couple of years back which I also own, so I kind of knew what to expect. The figures come in a clear plastic bag stapled at the top with a cardboard header that features some excellent art of a variety of zombies. This seems to be a World War II themed set so we get both Allied Zombies (Yeah! Woohoo! You guys rock!) and Nazi Zombies (Boo! Hiss! Mussolini is a weenie!) to re-enact Dead Snow, Wolfenstein, Call of Duty, or any other World War II story or videogame containing zombies. Ready for a look at Zombies at War? As I prefer to do when reviewing bags of plastic army men, I'm going to pretend that I'm describing the enemies in an old school NES video game. Pretend that you've just purchased a copy of Zombies at War for your NES from the big video game cage at Toys 'R Us in 1987. You're riding home in the back seat while looking at the instruction manual and eating Bonkers. The game seems to be similar to Code Name: Viper, but with zombies. Here are some descriptions of the enemies from this imaginary game that you might read... 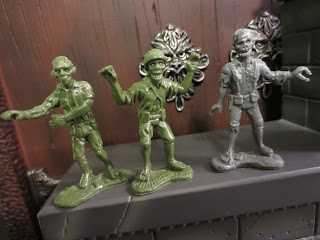 The Facts:
Height: Around 2 inches tall 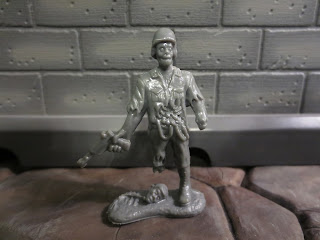 Pvt. Hobble: Due to their clumsiness (and their guts that are on the verge of falling out) these soldiers don't wander much. They stand in place above a former victim while their own guts pour out waiting to take potshots at the living with their Lugers. 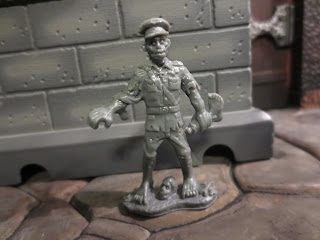 Colonel Chomp: Colonel Chomp is always hungry! He constantly roams back and forth looking for his neck meal while snacking on his last. He's quite fast and has worn his jackboots off as he tromps across the fields looking for the living! 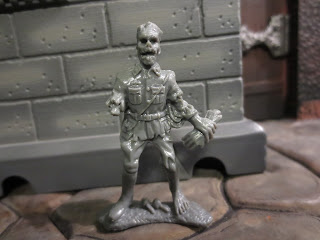 Sgt. 'splode!: Is there any zombie who hates the living more than they love brains? Sgt. 'splode does! Sgt. 'splode stands waiting for a hapless living soldier to appear; that's when he drops a potato masher grenade and prepares to be exploded along with his human victims! This guy's always a blast at parties! 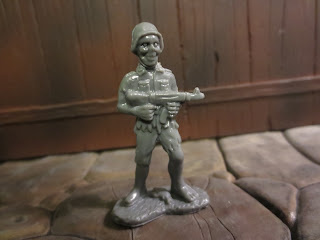 MP-Fleshy: These undead flesheating fascists continue to guard their posts against the living! Armed with submachine guns they can put a quick end to any unprepared zombie hunters. They love to collect the hands of their victims! 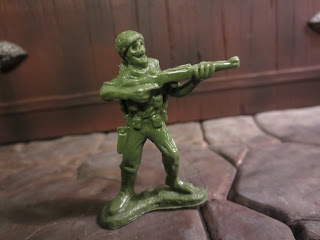 *Private Putrid: These undead warriors are just as motivated in death as they were in life; unfortunately, instead of freedom they now just want brains! Private Putrid makes a beeline for the living firing his rifle with all the precision and accuracy his rotting fingers can muster! 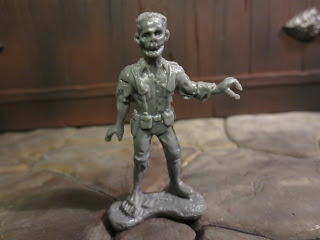 *Shambler: Here's your basic garden variety Nazi zombie. The Shambler just creeps along at a slow and steady pace looking for victims! Easy to avoid by himself but more difficult in larger numbers. 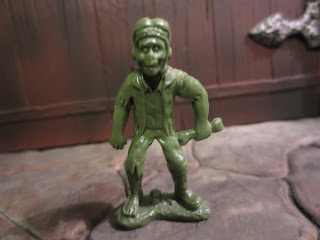 *Flyboy: Since zombies can't fly, Flyboy is stuck marching back and forth guarding the zombies' territory. Carrying a leftover from his last meal Flyboy will toss a gnawed bone at any living being who gets in his way. Duck or jump over it! 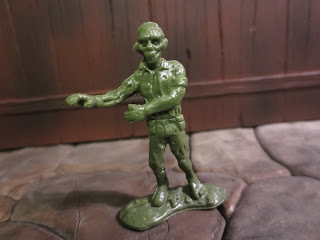 *Lieutenant Lurch: These guys are fast. They're not as rotten as their fellow soldiers and can move rather quickly when they see prey. Take them down from a distance! 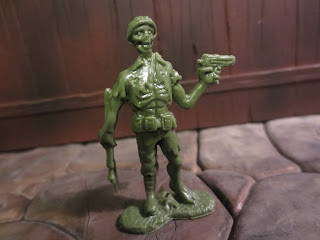 * Captain Cap'ya: Capt. Cap'ya still has a route to patrol and he's armed for the job! With his pistol an rifle Capt. Cap'ya can send a good deal of hot lead your way. You'll have to use every move you learned in basic to get past these guys! 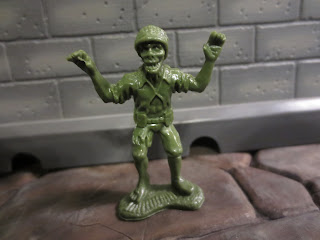 *First Sgt. Fright: Be careful walking past any window or doorway: You never know when a Fright will pop out and sink its teeth into you! Watch for their eyes in open doorways and windows or duck past them! 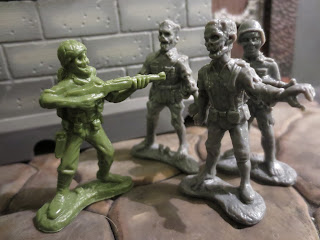 Zombies at War is a cool little set of figures. The figures are very nice and of a much higher quality than your regular plastic army man. They fit in well with most other 2 inch plastic figures as well and thus can be great for play, display, or wargaming. I love the gruesome details, the intricate outfits, and the variety of sculpts. I'm also digging the grey and green colors they chose to differentiate the two armies (each army has its own unique sculpts). At $10 for the bag you're paying a little less than 0.30 cents a piece for these guys which isn't bad. They're sturdy and fun. Some of the stands are a little thinner than I would have liked, so sometimes the zombies tip over, but other than that these are some nice plastic army men. I'm giving them a Great rating!

If you're interested in other mini plastic zombies, check out my reviews of: