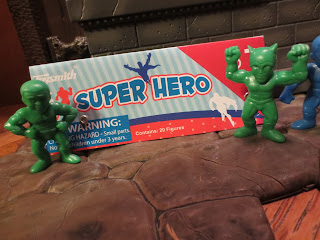 I first saw John review these over at Robot Monster Space Super Hero. John saw these because Frank at Little Weirdos reviewed them. I'm guessing Frank either saw these directly at Target or heard about them from a friend who heard about them from a friend who heard it from another that these were on sale. Anyways, this is a very inexpensive little bag of 20 figures that can be found on sale at Target in their dollar bins up front by the entrance to the store. They are made by Toysmith and are simply called "Super Hero." Yeah, these are superheroes all right. Kind of. The faces are kind of superheroish but they seem more like wrestlers with vaguely superhero gimmicks or male exotic dancers who "cosplay" for bachelorette parties. I'm really not if I've decided yet. I picked these up because they were inexpensive and bizarre. Ready for a closer look? Then join me after the break... 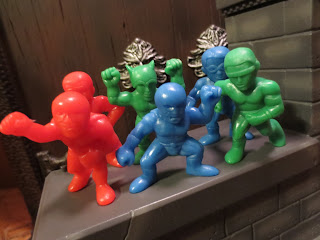 # of figures: 20 figures in 6 different styles and 3 different colors. 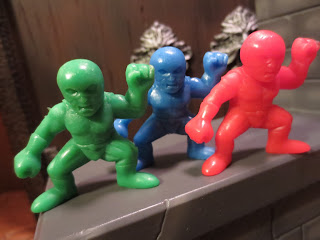 If he's a wrestler, then Mr. Mysterious is entrenched firmly in the luchador tradition and engages in high flying antics!

If he's a male stripper, then Mr. Mysterious is probably a Latin American school teacher who wears a mask to remain anonymous at all of those "off the books" PTA Fundraiders! 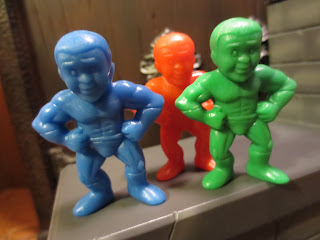 If he's a wrestler, Captain Muscles is the ultimate babyface! He's incredibly built but looks like the all American boy! Kids love him and anyone over 12 hates him. He's kind of like John Cena in that respect.

If he's a male stripper, Captain Muscles shows off for the ladies in the smallest trunks he could possibly find. He loves $1 bills and will work his moneymaker off to get them. 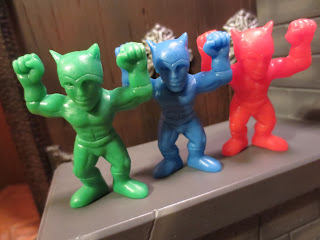 If he's a wrestler, Tomcat bases his character loosely on Batman. He doesn't hide his face but he's not quite a face; he's more of an anti-hero. His belt can hide various items he'll use against the heel when the refs not looking.

If he's a male stripper, Tomcat prances around and purrs. He brings a boom box with his own "Meow Mix" on it and also has a belt full of various items he can use to deliver a winning show to the local crocheter's guild at the Lutheran church. 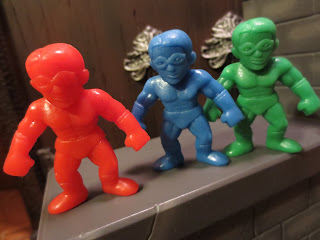 If he's a wrestler, Boy Wonder is a campy character who tries to be a face but everyone cheers against him. He definitely has borrowed heavily from Burt Ward's appearance as Robin.

If he's a male stripper then Boy Wonder is really popular with the wild women of the local nursing home. Gee-golly! 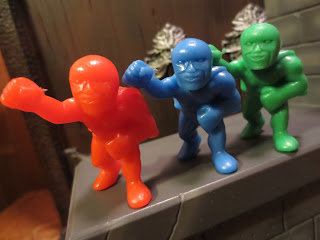 If he's a wrestler, then Power Fist is definitely a heel. He believes that he's genetically superior to everyone else and needs to enforce the will of the company on those who step out of line. His flying fist is his signature move!

If he's a male stripper, then Power Fist runs the stage at the local men's club. A local prominent elected official, Power Fist keeps his face covered and uses a cape to cover up his distinguishing tattoo. 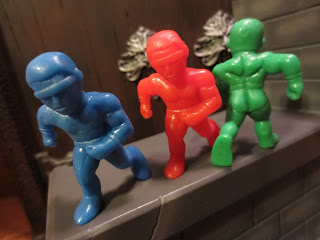 If he's a wrestler, One Eyed Avenger is a hardcore heel with no limits! Wrestle on thumbacks, hit his opponent with a sheet of glass, and cut himself even though it's against the rules? This guy doesn't care; he lives for the thrill.

If he's a male stripper, then One Eyed Avenger doesn't care about the rules: Only the money and thrill! He currently has charges pending and is being monitored via satellite. 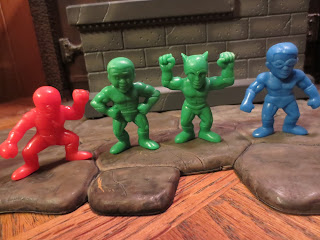 I have to admit that these are really, really bizarre minifigures. Then again, that's part of the charm. The sculpting isn't bad although the plastic feels a little cheap. Better than most plastic army men, though. I got a full set of all 6 wrestlers each in at least three different colors, which was pretty cool. Considering these are a dollar, fans of minifigures, wrestlers, superheros, and male dancers should enjoy these. That's a fairly diverse crowd, which shows the unifying power of the minifigure. Good and a 1/2!

I love random sets like this. I've reviewed a few others:
Defender Military Set by Boley
Monsters by Hing Fat
Zombie Playset by Boley
Zombies at War by Brilliant Novelty Co./ Spherewerx
Posted by Barbecue17 at 10/21/2015