31 Days of Toy Terror Returns: Xaltotun the Undead from Conan Series 2: Hour of the Dragon by McFarlane Toys 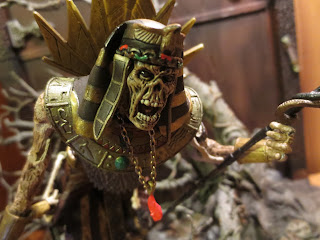 While we often focus on the present, sometimes the most terrifying horrors are quite ancient. Lying patiently in wait for the ideal time, they plot their return to the realm of the living to spread terror across the land...

In 2005 McFarlane Toys released their second series of Conan action figures based upon the work of Robert E. Howard. This time all of the figures were based off of one Conan story: The Hour of the Dragon, or Conan the Conqueror. Originally published in serial form in Weird Tales over five months from 1935 to 1936, shortly before Howard's death, the tale was later collected in a hardcover version. Today I'm looking at Xaltotun the Undead, a 3000 year old undead wizard from Acheron who is resurrected by Conan's enemies. I think he's a perfect fit for 31 Days of Toy Terror Returns, don't you? Read more after the break... 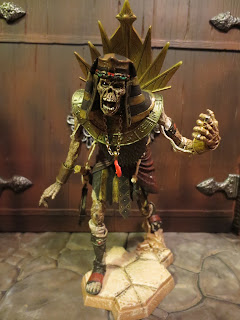 Accessories: Base and a staff. 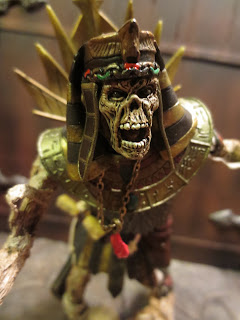 *As with nearly any McFarlane figure from this time period there is no doubt that this is an incredible sculpt. Xaltotun's body itself is wrinkled and mummified, as if he was preserved before his death. Look at his arms and you can see the deteriorating strips of cloth hanging down from where he was wrapped. There's a lot of Egyptian influence in the figure's design. 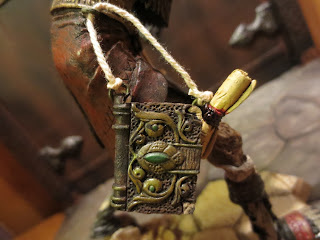 *While they're not really removable, Xaltotun does have a very cool ancient spell book and a scroll hanging from his right hip. They're both held on to a loop on his belt by an actual length of cord and they freely dangle as he makes his way through his underground catacombs. The book is beautifully sculpted while the scroll looks like ancient papyrus and has various runes and symbols on it. It also looks like it is bound by something red and wet looking... 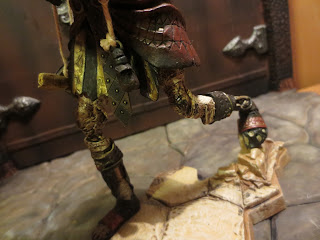 *  Most of McFarlane's figures are a visual treat to explore. There are a variety of textures and little extras that will jump out at you. There's a small pouch hanging from a cord on Xaltotun's belt. What could be in it? He's also wearing a scale mail cuirass and a leather tasset covered with various runes. Did Xaltotun have these pieces waiting for him in his tomb over the years or has he gathered them since his resurrection? 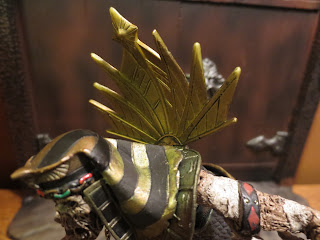 * His Egyptian inspired headdress is gorgeous and features some extremely intricate sculpting and paint applications. Also of interest is the crest that rises up above Xaltotun's head. It's hinged so you can raise and lower it depending on how you want to display the figure. Quite neat. 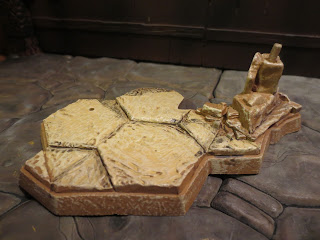 * I'm all about bases and stands, especially when they're like many dioramas. Xaltotun's looks like the ancient, sandy floor of some underground tomb. The floor tiles are chipping and wearing away and he's either descending from or stepping over some pile of rubble. 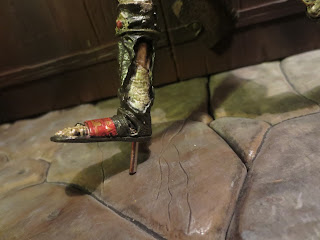 
*Many figures are designed to stand with the assistance of a base but this figure practically requires a base since he has a metal peg sticking out of his right foot. It does keep the figure standing nice and erect (no droopage here) but it limits any play value this figure might have. 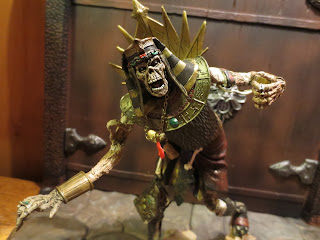 * The articulation is quite limited. It's there and looks OK on paper but it really just gives you little ways to augment the statue's pose rather than any chance to radically change it. This was definitely the period when McFarlane was moving fully away from articulated figures and looking back, it's sad that this line of Conan figures aren't better toys. A great Conan line is still needed! 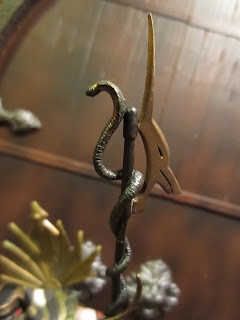 *Xaltotun's staff is neat and all but it's a bit too rubbery and Xaltotun has a difficult time grasping it securely. For a figure so heavily preposed, something like this shouldn't be as much of a problem. 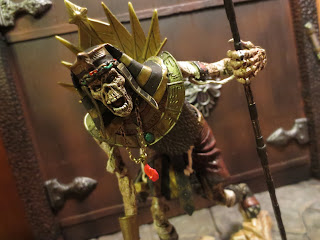 Like many McFarlane toys from the 2000's, Xaltotun is amazingly sculpted, beautifully painted, interesting to look at, and rather stagnant. He's not a bad mini-statue or "staction" figure, but just don't think of him as an action figure. He's a collectible desgned to just chill out on your shelf next to other Conan figures/ monsters/ etc. He's really impressive for what he gets right and I'm giving him a Great rating. At the time this was an impressive figure and now, 10 years later, he still is.