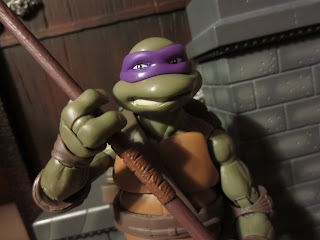 Today I'm looking at the first figure in the newest series from Playmates' Teenage Mutant Ninja Turtles Classic Collection: Donatello from 1991 cinematic classic Teenage Mutant Ninja Turtles II: The Secret of the Ooze! Back in 2012 Playmates released four 6 inch, highly articulated Teenage Mutant Ninja Turtles figures in a series they called the Classic Collection. These were the most well articulated and possibly most cartoon accurate TMNT toys ever at that time and fans gobbled them up. With that kind of success, how did Playmates react? Well, they released Rocksteady and Bebop and then proceeded to cancel the line. You're telling me Masters of the Universe fans will buy figures of nearly every character in existence but Playmates doesn't think they can make a dime off of classic interpretations of characters like Casey Jones, Shredder, April O'Neil, and Master Splinter? Perhaps they were too focused on the wildly successful Nickelodeon line and the then upcoming movie but eventually they did release movie versions of the four turtles in 2014. Now they've essentially just repackaged those four figures with more accessories and have released them as a Wal-Mart exclusive, just in time for the newest TMNT film. I skipped out on these figures the first go around, so I'm pretty excited to see them available again with cooler accessories and alternate portraits. I'll be reviewing the rest of the set early next week since I bought them all in one go but today I'm starting with Donatello, the brainiac of the group. Ready for a closer look at this new version of Donatello? Then join me after the break... 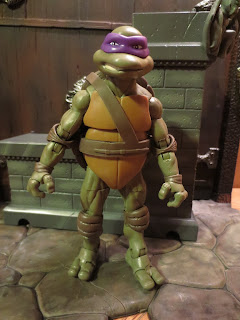 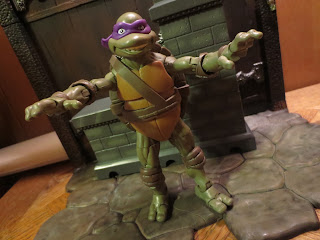 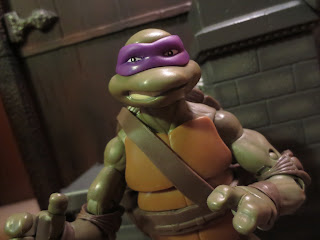 * I love the headsculpts on these. While these aren't insanely "movie specific" they definitely have a film feel. I really like the use of a separate piece of plastic for the bandanna over the eyes as it gives the figure a bit more of a layered feel, as does the belt. It's also a separate piece that, while not removable, helps the figure to seem just a but more intricate. 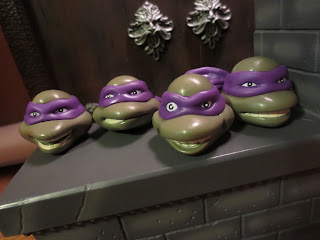 * Here's something I find amazing: Donatello comes with four interchangeable headsculpts. Four! That's crazy! I'm not sure I own another figure that came packaged with four different headsculpts. They're all unique, too (not shared with the other turtles). I know there isn't a ton of paint work here but they look great and give you a wide range of expressions and bandanna positions. Yes, some of the bandannas are hanging straight down while others are sculpted in a flowing position. They're super easy to swap, too. Eclectic! 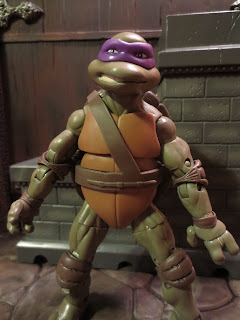 * Other than the heads and belts each turtle in this set shares the same body, which is just fine as the turtles don't really have very different builds in the film. Of course, as far as I can tell these are pretty much the exact same figures as the Classic Collection figures based on the original 1990 film which were released in 2014. Usually I'd be a bit peeved by this reuse but honestly it seems to work here. I'm sure there are differences between the costumes in the two films but it's not something I can identify easily off hand. Furthermore, these are decent sculpts. They're certainly not NECA quality or anything but they're definitely quality work for Playmates. I'm just glad that they didn't reuse the smoother cartoon based Classic Collection figures. 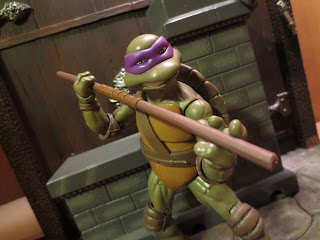 * Donatello just had to come with his bo staff, didn't he? It's a simple sculpt with a bit of wood detailing and some lighter brown paint on the handle, but that seems accurate to everything we see. This is a pretty fun weapon to pose Donnie using! 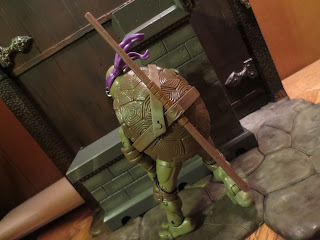 * As you would expect, you can store Donatello's bo staff on the back of his belt. The rubber loop is nice and tight and holds the staff quite well. 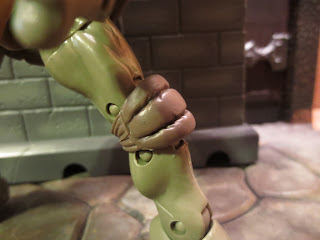 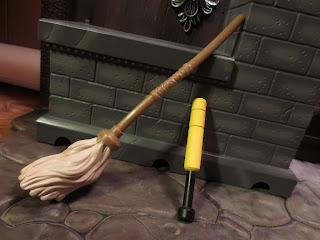 * Besides four interchangeable heads and his signature bo staff, Donatello also comes with two additional accessories: A mop and a foam covered toy bat. The mop is used in the film when the turtles are cleaning April's apartment while the foam bat is used in the opening fight scene in the toy store. They're not the most high quality accessories ever but they're pretty fun, film accurate, and they really add to the value here. You really get a ton of stuff in the package all things considered. 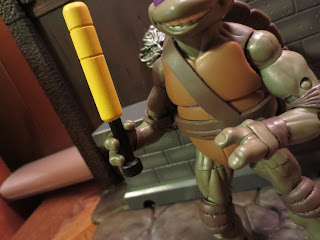 * Because the fingers are all individually articulated, it takes a bit of finesse to securely place weapons in Donatello's hands. I remember this problem with the earlier cartoon inspired Classic Collection figures and I can't say I'm glad to see it return. It definitely seems to promote the idea that these are for display rather than play as the weapons can easily fall out of the hands when the figure is shifted. Just be patient and try different things out and you should make it work, though. 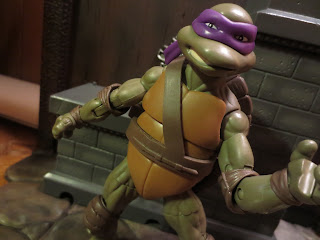 * Perhaps the biggest negative about these figures is that they really just don't have any paint work. Don't get me wrong, I think it's amazing how much articulation and how many accessories Playmates packed into these figures, but just some things like a wash on the shell and plastron or some of the distinctive spots the characters had in the films would have elevated these. I think even if Playmates had knocked these up a couple bucks higher to cover the extra paint budget, these would have been competitive. Playmates could have put forth a bit more effort since they were on the cusp of perfection and delivered something that really rivaled the current high end Japanese action figures we're seeing in this scale. 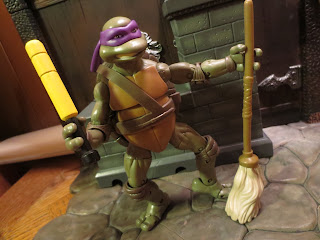 Here's the thing: These may not be perfect figures but my gosh is Playmates giving you a lot for your money. Compare the amount of accessories they give you (four portraits and three fairly large accessories with paint application) and the amount of articulation here with anything else on the shelf at your local store. There's no doubt you're getting an insane deal! On the next episode of the Collection Agency Brad and I will be discussing the current trend of high end 1/12th scale lines such as S.H. Figuarts, Mafex, Figma, and others. Take a look at those lines and the typical mass market collector lines like Star Wars Black, Marvel Legends, and DC Comics Multiverse: Which of those groupings does this line more resemble? I'm really leaning towards the higher end lines simply in terms of what's offered. Playmates has given collectors and TMNT fans a pretty great gift with these and me and the little one are having a blast (she loves the TMNT)! Donnie gets an Epic rating from me as he's quite possibly delivered the best value this year.

I'll be reviewing the rest of the figures in this series next week, so stay tuned for more turtle-tastic reviews!
Posted by Barbecue17 at 5/27/2016