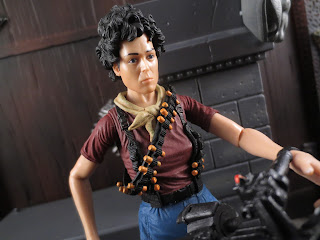 April 26th, 2016 was the first ever Aliens Day and to celebrate NECA released a exclusive Aliens figure through Toys 'R Us based on Ripley's appearance in the original 1992 Aliens toyline by Kenner. NECA has really gained a reputation for making some cool throwback figures like this and Ripley is perhaps one of the neatest they've done. It doesn't hurt that Ellen Ripley has been a tough figure to track down in both NECA's Alien and Aliens lines. Here's a chance to get the same great Aliens version of Ripley with a cool new paintjob and a brand new accessory. Honestly, as someone who played with the toyline long before I ever saw the film, this is without a doubt my version of Ripley. I found her at Toys 'R Us last week as part of a pre-dental visit toy run. Ready for a closer look at this figure? Then join me after the break... 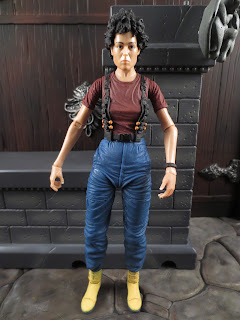 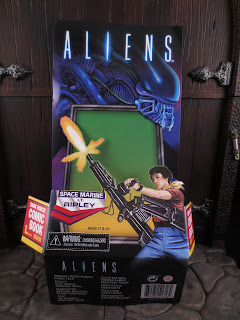 
* Here's a quick clip of the inserts for the packaging. As someone who bought a ton of Aliens figures back when they were originally released in the early 1990s, this packaging has a really strong nostalgic pull to it. I love the colors, the art, and the cross sell images of the other figures available on the back. Absolutely incredible stuff! 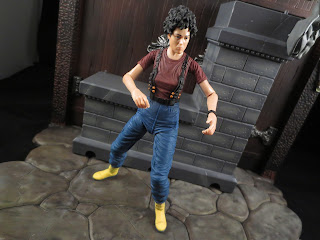 * Like so many of their modern figures, Ripley has an excellent mixture of functional articulation that also manages to mesh well with the sculpt of the figure. 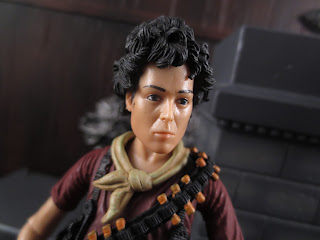 * Look at that! It's Sigourney Weaver! Sigourney Weaver has an incredibly unique face and it really took a company like NECA t do her justice. The hair is perfect, too. I hate that I've missed the previous Ripley figures NECA has released, so I'm glad to finally have her on my shelf of various action film heroes! Plus, this one has the cool bandanna which the vintage figure had. I love that little detail! 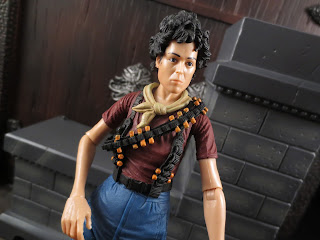 * NECA just nailed the colors on this figure. I love the vintage figure's maroon and yellow color scheme and it's captured perfectly here. To be 100% honest, this is without a doubt the way that I envision Ripley in my head. I still think of this outfit. I also love the new bandolier across her chest. It just looks incredible! 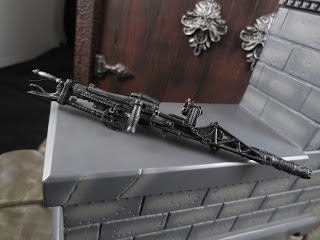 * Ripley comes with a brand new accessory for the line: The M56 Smartgun! This is one of those accessories that you really need to zoom in on to enjoy as it's incredibly detailed and film accurate. NECA did an awesome job with this and I can't wait to see it again when it arrived with the upcoming Vasquez figure. 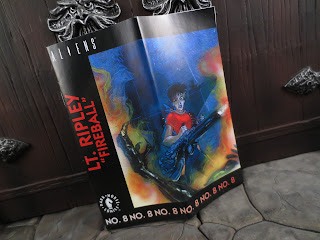 * I cannot tell you how often I used to sit down with these Dark Horse Aliens comics and read through the entire series in a sitting. I loved these things! While minicomics sadly seem to have become a thing of the past, I love that NECA reprinted the entire comic here in a form that's extremely close to the original. This kind of stuff is absolutely amazing and one of the things that makes NECA such an incredible company. 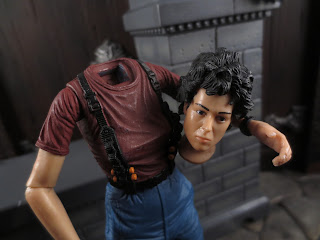 * My Ripley's head popped off. Fortunately it's glued on to the torso so there is no actual breakage, but this is still a pretty annoying problem. The head does not have a great range of motion as when I was trying to get her to look forward (her head tends to be looking down) it just popped off. Again, a couple of drops of glue will fix this, but that really shouldn't be necessary, should it? 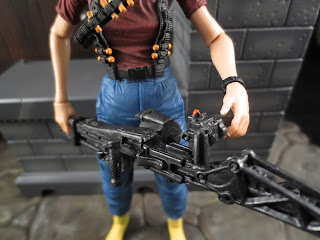 * Another fairly major problem with this figure is that Ripley really cannot hold the weapon she comes with. Sure, you can fudge Ripley holding the M56 Smartgun, but her left hand really does not have a good grip on the forward handle.

Honestly, I'm not quite sure while NECA didn't try to recreate the flamethrower accessory or rifle that the vintage Kenner Ripley figure included. Heck, even a repainted standard flamethrower would have been a better choice. 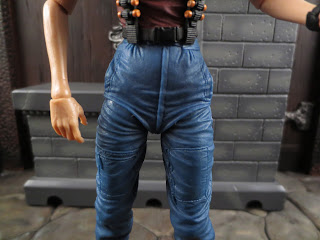 * While I'll certainly give NECA credit for managing to conceal functional articulation help preserve the look of the sculpt, I really cannot help but feel there's something a bit off with Ripley's pants. They look like mom jeans or something. I mean, I know Ripley's not that concerned with style and such, but this still doesn't quite work for her. 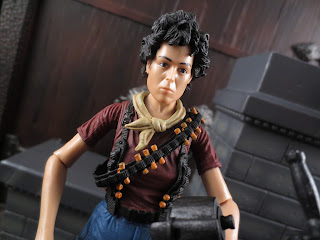 I want to like this figure a ton, but I have to admit that the fact that her head kind of fell off (not broke off, though) and the difficult she has in holding her weapon really do disappoint me. The sculpt, presentation, and paintwork are just incredible, but there are just a few flaws that feel like some oversights on NECA's behalf. If Ripley's head had truly broken off I would have been much more harsh on this figure but, as it stands, a simple but of glue fixed things with no problem. As it stands, Ripley gets a Good and a 1/2, although I feel she could have been so much better with just a few minor changes!

The only other Ellen Ripley figure I've reviewed on the site is the vintage 1992 figure that this NECA figure tributes! I've reviewed a few other Aliens products from this line and others, including: