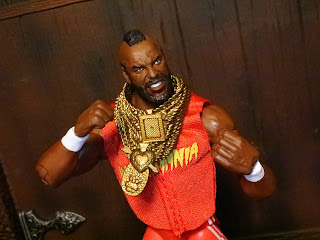 Who's ready for Mr. T? I am a huge Mr. T fan and I was beyond thrilled to find this figure. It's been a couple years since I last purchased a straight up wrestling figure (though I did grab the Masters of the WWE Universe figures) but when I stumbled upon this WWE Ultimate Edition of Mr. T, I just knew I had to add him to my collection. I'm honestly considering popping his head on a spare G.I. Joe Classified Series body or on an Action Forcer body so Mr. T/ B.A. Baracus can join the Joe team, but wrestling fans should find a lot to like here, too. The WWE Ultimate Editions seem to be Mattel's current deluxe WWE offerings as they come with multiple outfit pieces, alternate heads and hands, and a dew accessories each. The prices seem to be all over the place but, from what I can tell, they retail for around $33 dollars. I didn't pay that much. I paid less than $5 bucks. Seriously, I love this bin store near me. It's like the old KB Toys bargain bins, but better. Less than $5 bucks for Mr. T? I pity the fool who'd pass that deal up! Let's take a look at this version of Mr. T from when he was Hulk Hogan's tag-team partner at the original Wrestlemania in 1985... 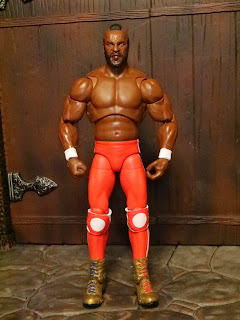 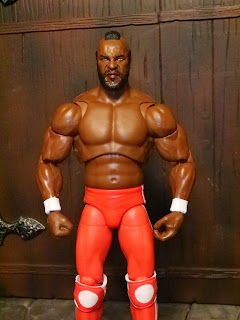 * It's been a few years since I picked up one of Mattel's deluxe wrestling figures but they've definitely changed things up a bit, adding more articulation. I'll get to that in a minute but as to the figure itself, it's definitely Mr. T in his Wrestlemania I in-ring gear. There's not a lot of paint detail here but the details all look right from the sweatbands to the kneepads. 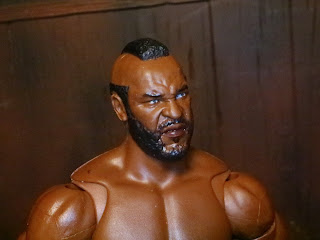 * The portraits are really the stars of the show, and this set comes with two of them. The first one is Mr. T just looking tough, mean, and ready to beat some fool down. Mattel really nailed the details of his face. The expression is perfect and the paintwork is neat and clean. This is a very, very realistic sculpt. I think the expression may even be a bit better than NECA's Rocky II Clubber Lang figure. It's been 10 years since that figure, but the sculpt still holds up well, so that's high praise indeed. 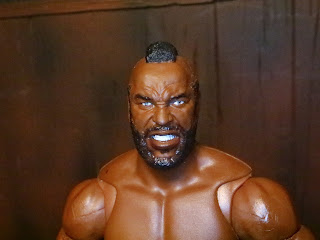 * The second sculpt shows Mr. T in full on angry mode. The squinted eyes, the gritted teeth. Incredible! I don't like this one as much as the first portrait, but that's a personal preference. The sculpt itself is really just as good. 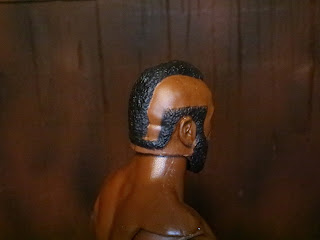 * Mattel also did a really nice job of capturing Mr. T's distinctive hairstyle. Inspired by photos of the Mandinka he saw in National Geographic magazine, Mr. T's hairstyle is a key part of his look and persona and it's awesome to see it rendered so well. 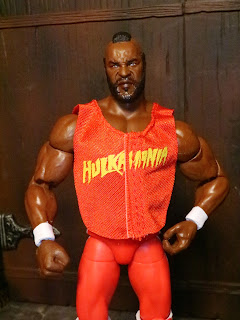 * Mr. T comes with two fabric clothing items, the first being his "Hulkamania" sleeveless t-shirt. It uses a Velcro flap on the front to make it easier to put on the figure and it looks pretty decent. It might be a bit large but you can probably work with it a bit for a better fit. 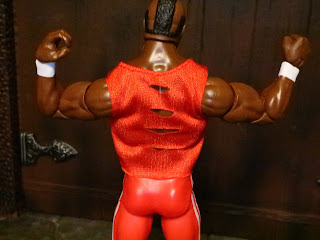 * The rear of the shirt has the cuts out of it, just like most of Hulk Hogan's gear. I assume this makes it easier to rip the shirt in half when taking it off. 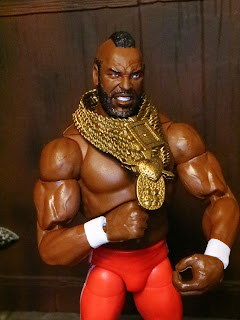 * Mr. T comes with a massive pile of gold chains you can place around his neck. It actually looks like the jewelry he's wearing on the Wrestlemania promo image, minus the cross (which is a separate piece included here). The piece fits fairly well (it's a bit big, so it will fit over the t-shirt if you want too) and the detail on the individual strands and jewelry is quite sharp. 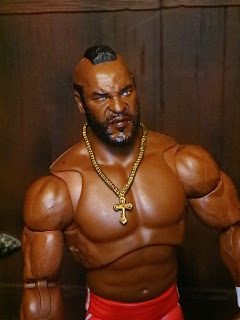 * I honestly like the look of the single cross by itself, too. It's a nice accessory and looks a bit more subdued (not that subtlety is part of Mr. T's persona). 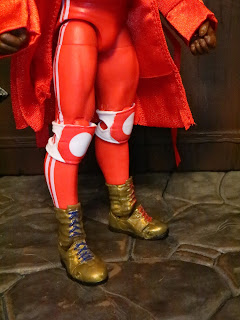 * Mr. T is sporting kneepads (they're separate pieces but they're not removable) and some cool gold boots with red and blue laces. The Masters of the WWE Universe version of Mr. T was inspired by this pattern from his Wrestlemania I ring attire as well, but this one is a bit more accurate. 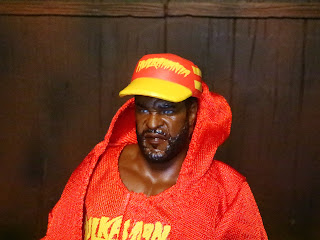 * There's also a "Hulkmania" ball cap included. It's kind of rubbery and clings well to the head of the figure. The "Hulkamania" print is also neat and clean and wonderfully flashy. 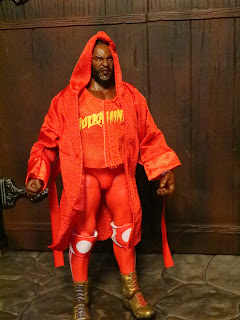 * The best of the outfit accessories is this robe. It's a ring robe and it's really nicely tailored. It fits well, drapes appropriately, and just feels like a quality garment. The hood looks great on Mr. T's head but can also fold down in the back decently. There's even a belt that you can tie if you want to have it on securely. 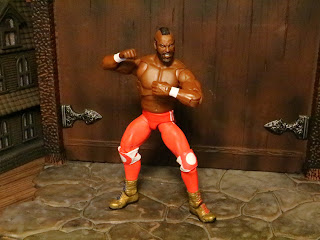 * I was always impressed with the articulation on Mattel's WWE Elite figures back when I was collecting then from 2014 through 2016 but it's nice to see that they've improved further. Mr. T has some pectoral hinges with an incredible degree of motion and an excellent balljointed mid-torso. He's a fantastic figure with the ability to obtain most wrestling poses you can think of. He's also really solid and sturdy, just like the real Mr. T. 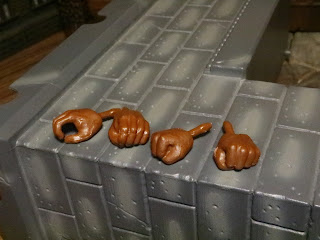 * There are two pair of hands included: A pair of gripping hands and a pair of fists. They swap out easily and allow you to get just the look you want for whatever wrestling move or action pose Mr. T is in. 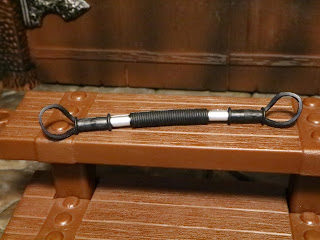 * The last accessory is kind of unusual. It's apparently called a Python Twister and it's some sort of strength training gear from the 1980s. I think my dad may have had one of these when I was a kid, but I'm not sure. I don't know if Mr. T used one of these in a promo or something of the like, but it is a cool extra. 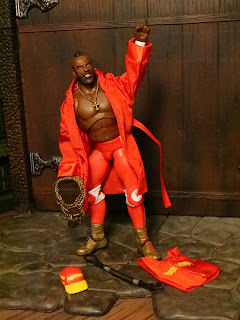 Remembering that I paid less than $5 bucks for this guy at a bin store and that I'm nuts about Mr. T, I'm obviously thrilled with this figure. Even considering that these Ultimate Edition figures sell at a deluxe price of around $33 (though shop around as they seem to be on sale all over), there's still a lot of goodies included to somewhat justify the price. Not only is the figure itself good but the two alternate portraits are excellent, possibly the best action figure depictions of Mr. T ever. Throw in two soft goods outfit pieces, some gold chain options, and the hat, alternate hands, and Python Twister, and you've got a figure you really can customize quite a bit. While I imagine that at some point one of the alternate heads from my figure will make its way onto a G.I. Joe or Action Force body, this is a great way to depict a pop culture icon of the 1980s at one of the biggest popular culture events of the 1980s. This is an Epic figure and proof that despite my current disinterest in most wrestling product, Mattel has a stellar team working on the WWE license.