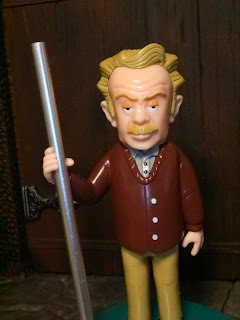 Happy Festivus! No matter if you're celebrating this evening by hosting a dinner complete with the Feats of Strength and the Airing of Grievances and dining on meatloaf on a bed of lettuce with a side of peas or just sitting back and watching "The Strike," Festivus is a special day worth celebrating. No tinsel and no gifts, though. Today I'm checking out a very special figure: The father of Festivus himself, Frank Costanza. Culturefly has apparently made quite a few cool Seinfeld collectibles but this year's Frank Costanza (complete with an aluminum Festivus Pole) is a true Festivus miracle. Let's celebrate this Festivus for the rest of us after the break... 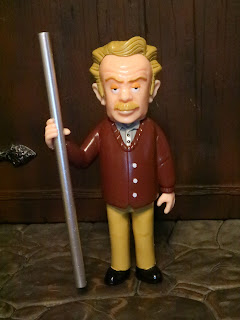 Height: 5 inches (without base) 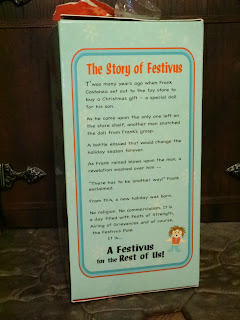 
* Frank comes packaged in a pretty standard window box with some images of Jerry Stiller as Frank Costanza on the sides, along with a few character quotes. The coolest part, though, is "The Story of Festivus" printed on the side. It's a nice look at the history of the holiday as detailed in Seinfeld. 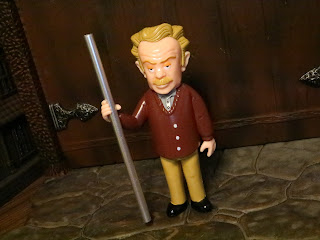 * Frank Constanza doesn't have any articulation but he's easily recognizable and in a fairly standard pose, proudly holding up the Festivus Pole. He does come with a display base, but he stands perfectly fine on his own. Back about 7 or 8 years ago Funko released some stylized Seinfeld figures under their Vinyl Sugar brand. Frank Costanza in this same outfit and pose was released their, too, though this one is less stylized and just looks better. 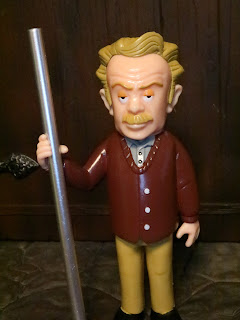 * Frank's wearing his outfit from the Festivus episode in the episode "The Strike" when he hosts everyone at his home for a Festivus dinner. He's got a maroon sweater, a button up shirt, and khaki pants. This is a stylized vinyl figure so the detail isn't crazy, but there are some details like the ribbing around his collar and the buttons on his sweater and shirt. 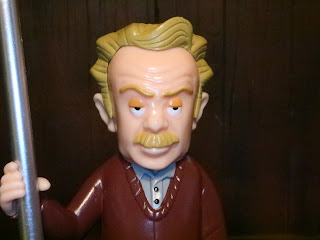 * The likeness is pretty good. Again, it's stylized, but it's clearly Frank Costanza. I love the mustache and his wavy hair. The expression is perfect, too. He looks ready to air his grievances any moment now, and he's got a lot of problems with you people! 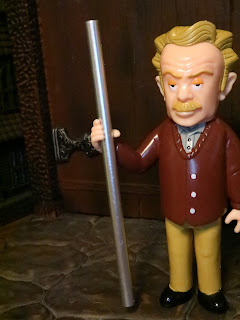 * It's not removable but Frank does come with the Festivus Pole. It's an unadorned aluminum pole, as it has a very high strength-to-weight ratio, and it's ready to be set up. 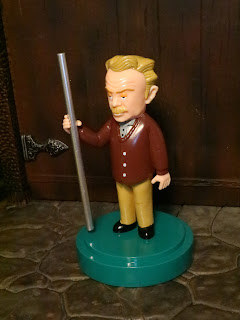 * The display base for Frank is quite nice. It's a festive green color and he stands on it securely. The bottom even has some foam/rubber grips to keep him from sliding around. 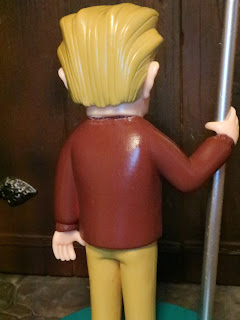 
* As a vinyl figure, there are always some little molding and assembly oddities that show up. Besides a little paint slop in places, there's also what looks like Glue where Frank's head is attached to the body. It's only visible on the back but it's still present and looks a bit messy. 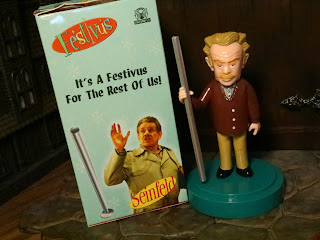 Who wouldn't want to celebrate an old fashioned family Festivus with Frank Constanza? There'd be shouting, wrestling, and no shortage of Festivus miracles. Frank's a Good and a 1/2 vinyl collectible and makes for a great tribute to the holiday. It's also a reminder to chill out and relax when the holidays get overwhelming. Serenity now! Culturefly seems to make lots of cool stuff but they really just haven't been on my radar. I love Seinfeld, though, and I've been excited to check out some of the things they've previously released. I need that Human Fund mug immediately!

This is the first toy of Frank Costanza I've reviewed.

Also, here's a picture of a Festivus brownie cake my dad made for us! 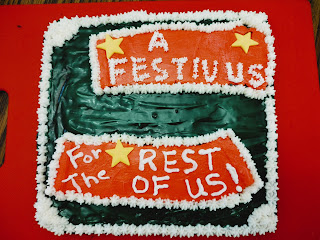