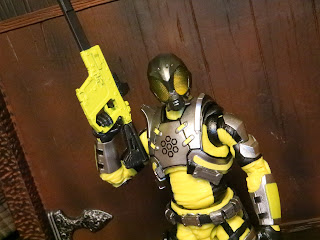 Valaverse recently released a Special Deployment Series at the beginning of the December that shipped to me before Christmas. I picked up lots of cool stuff, mostly accessory packs (including the super cool Crimson Shadow Arsenal tin with 98 weapons), but the only full figure I grabbed was the SWARM trooper. I can't completely remember why I skipped this guy the first time around but this reissue was back in stock and I snagged him, along with the SWARM Gear Pack. I received the SCARAB for my birthday a few months back and since I liked the design and color scheme so much, I opted to add the SWARM Trooper to the ranks. Let's take a look at this very cool army builder after the break... 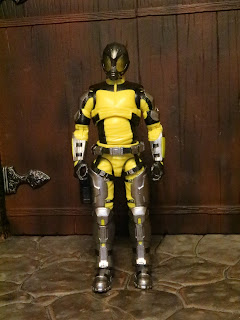 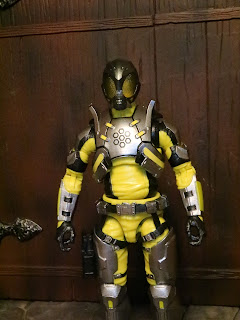 
* So far most of the Action Force figures have used the same couple base bodies, but the armored arms and legs and the unique vest really set this one apart. The SCARABS use the same legs and arms as the SWARM Troopers, but they first showed up with this guy (or the Wasp Raider BotCon 2021 exclusive figure if you want to get technical).  The armored vest is really cool and has the SWARM honeycomb logo on it. There are also some extra magazines hanging off of the sides. When you put this gear on him and deck him out in yellow and black he looks a lot like Marvel's Yellowjacket, doesn't he? * The SWARM Troopers have all had their brains augmented and one of the neat things about their helmets is that the eyes are translucent, given them a very unsettling appearance. The head reminds me of the Frag Viper from G.I. Joe, but with the black and yellow color scheme. The segmented detail on the eyes is really nicely done, completing the look. 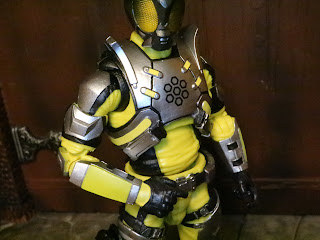 * Here's a shot of the SWARM Trooper's armored gauntlets and shoulder pads. 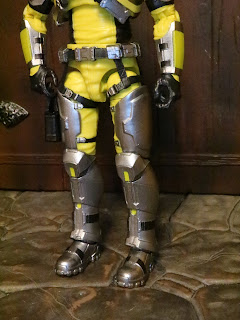 * And here is his legs, complete with cool boots. I love the small paint details on them. The little yellow and black paint apps really bring out the detail in the boots. 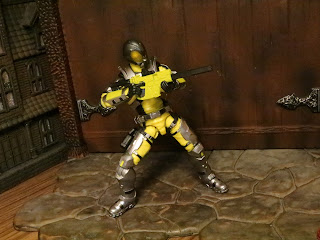 * Even though the limbs are different on the members of the SWARM, the articulation is pretty much the same as on most of the other Action Force figures I've picked up so far. The joints and range of motion are excellent and everything worked just fine right out of the package. Unlike the series one figures, there was no need to do anything to loosen up the joints for posing on this reissue of the SWARM Trooper. These are sturdy, well made made action figures that are a lot of fun to pose and mess around with. This guy is just crazy cool. 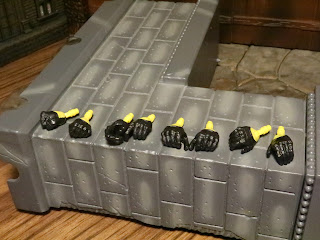 * The SWARM Trooper comes with the same eight gloved hands in the same poses as those included with every other figure, just in yellow and black. The pegs are really thick and sturdy and swap in and out very easily. There's a pair of fists, a pair of pistol grips, a pair of standard grips, and a pair of cradling hands for holing rifles. 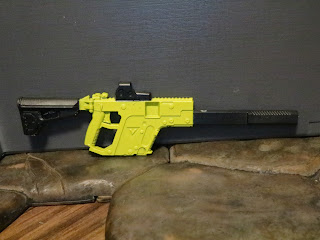 * I love this yellow and black KRISS Vector. It's heavily modified with an enhanced barrel shroud to prevent you from touching the barrel as it gets hot from firing multiple rounds, it has a full stock, and it's yellow and black. That's a really great touch. The SWARM knows to go all the way with your chosen color palette. 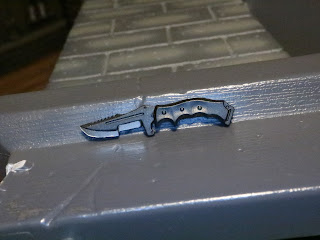 * He's also equipped with a small tactical knife for some up close combat. There's even a little silver paint app on the blade. 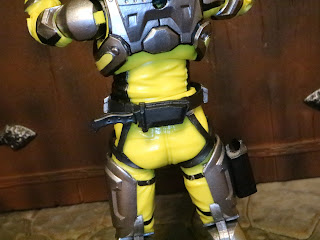 * It fits right into the sheathe on the rear of his belt. Convenient and deadly! 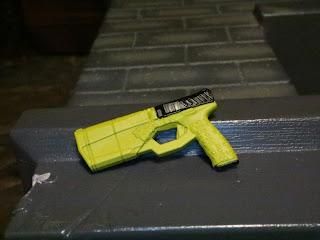 * Lots of the Action Force troops use the SilencerCo Maxim 9, a pistol with a built in suppressor/ silencer, and it seems to be a favorite of the SWARM. The grip looks like a pretty standard modern pistol but the front seems rather advanced and suited to the futuristic appearance favored by the SWARM. The SCARAB also came with this pistol, but this model has more yellow, with only black for the slide. 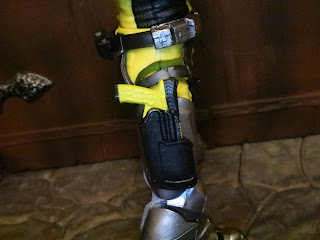 * Need a holster? This guy delivers. The SWARM Trooper has a holster permanently attached to his right hip. The pistol slides inside easily, like a warm knife into honey. 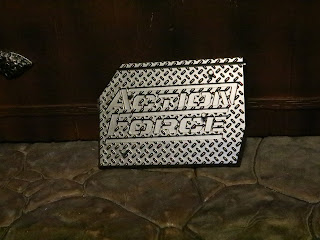 * I'm a huge proponent of all action figures coming with display bases and Action Force's bases might be the best out there. The metal look of the display stand is fantastic and there are four pegs on the base, making it extra versatile. See that little slit at the back? If you want to cut out the file card from the SWARM Trooper's package you can even display it behind him. I've actually picked up some of these stands by themselves from Valaverse on their own and they work great with the G.I. Joe: Classified Series figures as well. 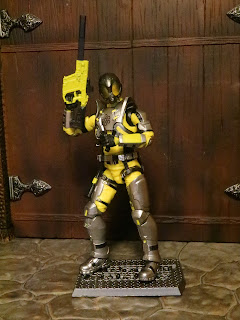 The SWARM Trooper is another hit from Valaverse in their Action Force line. Valaverse has put out quite a lot of product for 2022, their first full year releasing figures, and almost all of it has been incredible. Their figures are really impressive and it's been quite amazing to seem them already improving on the fairly minor quality control issues that showed up on the first figures released earlier in the same year. The SWARM Trooper is really cool and stands out nicely on the shelf. He gets a Great and a 1/2 rating from me. I'm not sure if I'll get around to reviewing his gear pack for not but it definitely makes him a more visually interesting figure. It's a Great set with some rather nice accessories, particularly the shield and articulated wings. I'm already starting to work on my best of 2022 lists in my head and I have no doubt that Action Force will make the cut as one of my ten favorites lines of the year.