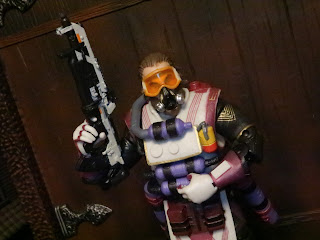 For most of the late 2010s it seemed like the only makers of traditional action figures on mass market retail shelves were Hasbro and Mattel. Over the past 3-5 years, though, it feels like a number of other companies have shown up, delivering toys to mass retail. NECA has dramatically improved their retail presence, McFarlane has reemerged with their successful DC Multiverse, and smaller companies beginning with the letter "J" like Jazwares, Jada Toys, and Jakks Pacific have been offering lots of solid toys, mostly based on video games. Jazwares has had success with Fortnite and Halo, Wicked Cool Toys with Pokemon, Jada Toys is getting ready to deliver some solid looking Street Fighter figures, and Jakks Pacific has been putting out lots of Super Mario, Sonic the Hedgehog, and figures from Apex Legends. I've seen the Apex Legends figures on shelves for at leas a year and while they've always caught my eye, I've never snagged any. When I stumbled upon Caustic in his Geometric Anomaly skin at GameStop one day when there was a sale going on and I had some Pro rewards bucks, I picked him up. While he certainly looks like the character from the popular video game, I picked him up because he looks like he could make a good Cobra agent. He's straight out of the G.I. Joe Eco Warriors designs of the early 1990s. I'm not very familiar with Apex Legends but I'm always down for a good figure. Let's check out Caustic (Geometric Anomaly) after the break... 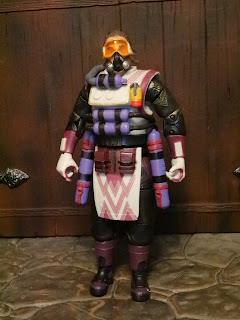 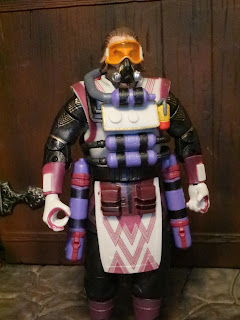 * The style of the Apex Legends line reminds me a lot of Hasbro's Overwatch line, a toyline I loved but that didn't lat very long. The Apex Legends line has been around since late 2020 and seems to be trucking along with a mixture of new sculpts and various "skin" repaints. The Geometric Anomaly skin is one of the "Rare" skins for Caustic, a scientist who began developing pesticide but who has moved on to testing on live subjects. He's a rather complex looking figure with a detailed body suit, a heavy duty smock with a cool paint pattern, and lots of tanks and canisters all over his body. There are lots of paint applications, too, and multiple colors. He looks quite impressive and is a really fun design. 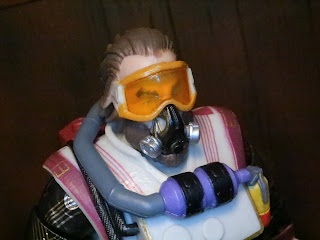 * The portrait of Caustic (real name Alexander Nox, no relation to Alexander Knox from the 1989 film Batman) is mostly obscured by his respirator and goggles. He's clearly a bigger guy, though, with slicked back hair and a large beard. Something about him reminds me of David Harbour, particularly as Red Guardian from Black Widow. His face is barely visible beneath his large orange goggles, which is a neat effect. 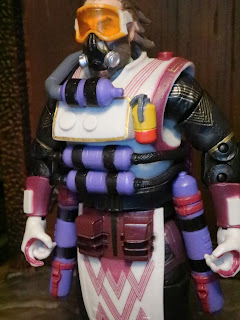 * There are so many tanks and tubes on Caustic's chest. There's also a canister grenade, probably one of the Nox Gas grenades he uses in the game. The dude creates a dangerous gas and names it after him self (Nox/ Noxious; get it?), which is definitely supervillain behavior. None of the tubes on his chest are removable, nor is the grenade, but they're separate pieces permanently attached to the figure 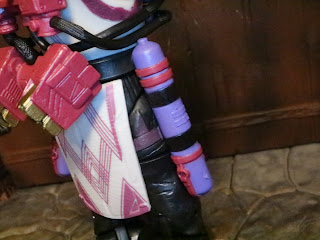 * He's also sporting two massive tanks of Nox gas that hang from his built. They're actually attached via swivel joints, so they can swivel back and forth. Pretty neat looking. 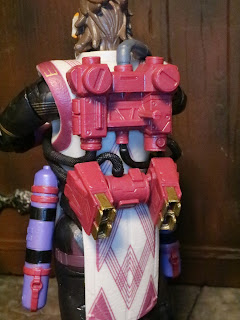 * Caustic's backpack is a pretty cool piece. The top and bottom parts (the magenta pieces) are removable. One looks like a piece that might regulate the various weaponized gases he carries while the other almost looks like a jet booster of sorts. Of course, maybe those gold vents are where he disperses gas. Could be. They're accessories that attach on and you just plug all of the tubes into place. Pretty slick stuff! I love the look of his gear. 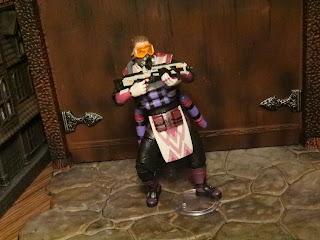 * The articulation setup is good and everything feels durable and solid. The joints feel pretty standard for a modern articulated action figure from Hasbro. Maybe not as smooth but petty respectable. Since Caustic is a bigger guy he's not as nimble a someone not wearing 100 pounds of gas tanks and hazmat gear, but he still can move and shoulder his rifle nicely. 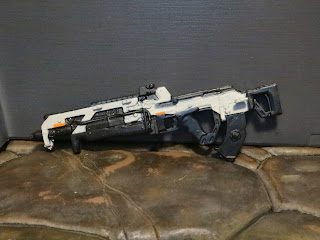 * Caustic is armed with the VK-47 Flatline, an automatic bullpup styled rifle with a slightly futuristic design. The weapons in the line look really good and I'm digging the unique aspects of the sculpt and the paint applications. It's a nice mixture of futuristic and practical. It's pretty accurate to the in-game model, too. 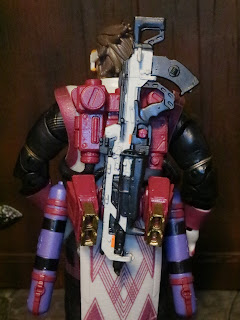 * Want to stow away the rifle while Caustic is busy mixing up some noxious gases? It plugs onto a peg on his backpack. Pretty neat! 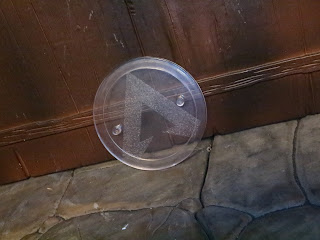 * I love that the Apex Legends come with little disc stands with the stylized "A" logo. It's a neat feature, and I'm always for action figures coming with stands. 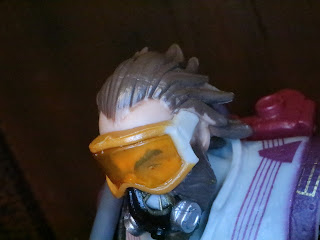 
* My only complaint is that Caustic has some messy paint applications around his hairline. It's just a bit less neat and clean than the rest of the figure. 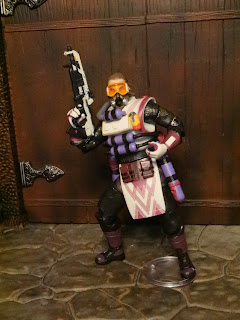 Caustic (Geometric Anomaly) is a really cool figure. As I've already stared, I'm not a fan of Apex Legends at all (I've never played it) but I just liked the look of this figure. He looks like he'll fit right in as a Cobra operative for my purposes, but fans of the game ought to be quite happy with how accurate he looks to the in-game character, too. Jakks Pacific is delivering a quality line of figures with a lot of character at a solid price. I may have to go back and see what else they've released that could work in my G.I. Joe Classified Series collection. Caustic is a Great and a 1/2 figure who feels very unique. The color scheme is different from just about anything else out there I can think of and I'm digging the idea of this guy as some kind of crazy mad gasser just running around with gear that disperses a cloud of weaponized gas around him. He's a walking violation of the Geneva Convention and someone has got to stop him!

This is the first figure of Caustic I've reviewed.