31 Days of Toy Terror X: Leech from Masters of the Universe Origins by Mattel 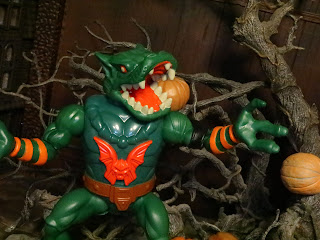 You can always rely on Masters of the Universe for lots of creepy and freaky creatures to populate 31 Days of Toy Terror and today we're checking out Leech, the Horde member who is known as the "Evil Master of Power Suction." Masters of the Universe Origins has really turned into an expansive toyline and Leech is one of the newer deluxe releases. I picked mine up at the end of July and have been holding off on him for a few months since he seems like a perfect creature for the Halloween season. While technically he drains life-force from his prey (and not straight up blood), this Slebetor Slug-man definitely delivers the scares. While Mattel seems ready to focus on the Snake Men in 2023, 2022 has seen a fair amount of Horde related releases and Leech adds another major member of the faction's roster to your Origins collection. Let's check out Leech after the break... 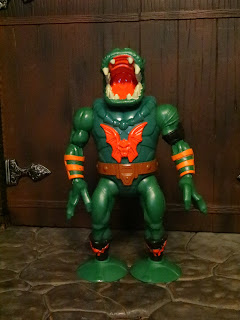 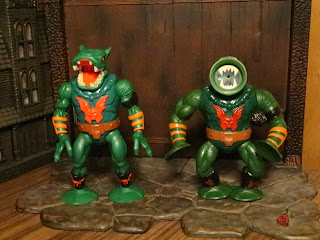 Comparison:
* The MOTU Origins Leech is on the left while the vintage Masters of the Universe Leech is on the right. Mattel did a very faithful job of translating Leech's vintage look into Origins, making him a bit brighter an a bit taller. He has swappable hands and a second head now, too, so you can have him with his classic suction cup body parts or the more modern sculpted head and hands. 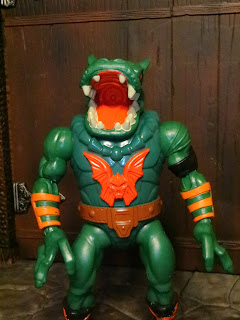 The Positives:
* Leech is very unique body-wise. His torso is larger and he seems a bit taller, though his limbs are creepy and a bit thinner. It's a weird look befitting a slug-man like Leech. The sculpt on his torso is excellent with lots of details on his armored chest. There are two shades of green used here to give him a more complex look. He really turned out nicely. 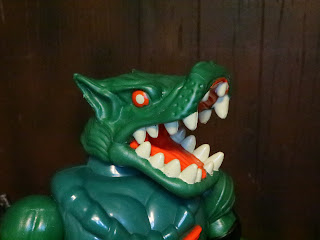 * The updated head doesn't incorporate the vintage suction cup feature. Instead, it has a sculpted mouth filled with lots of teeth. I like this look better when you're displaying the figure and it's a nice upgrade over the vintage toy. It reminds me a lot of the Masters of the Universe Classics Leech. 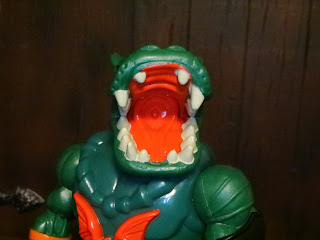 * Leech's mouth is hollow and has some sculpted detail showing the inside of his energy-sucking mouth. Creepy! 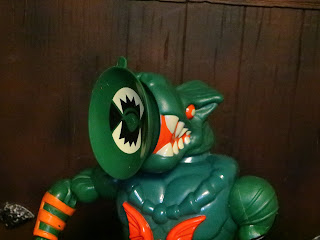 * The second portrait features a suction cup mouth, just like the vintage toy. It definitely works pretty much like how you remember although this is a true suction cup with a little tab to release the hold, whereas the vintage toy has a button on the back of the figure which pumped air out of the base of the suction cup to allow Leech to get a hold on something. 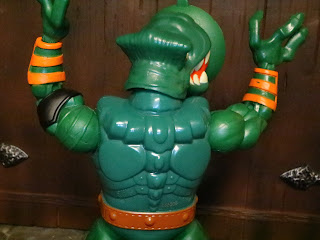 * Flip Leech around and you can see the armored plating on his back, protecting his slimy green center. He also has a difference between his left shoulder, which looks more armored, and his right shoulder. That's actually true with the vintage figure as well, so someone at Mattel was paying close attention when developing this guy. I wouldn't have noticed that missing detail but I'm glad it's here. 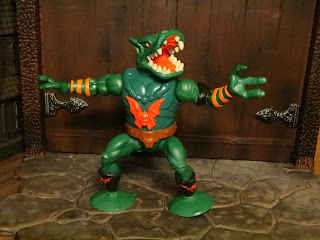 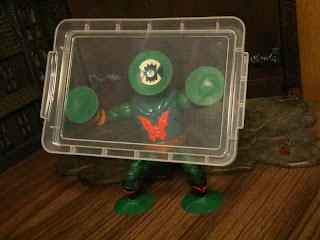 * Leech's suction cups work really well! You can stick his feet to the ground and use his hands and mouth to move around stuff. If being the Evil Masters of Power Suction for the Horde doesn't work out he definitely has a clear as one of those guys who moves big panes of glass around. 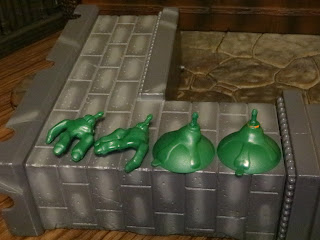 * Leech comes with two sets of hands: A pair with long, slimy fingers and a pair with the suction cups. That's a great option and it's fun to swap them back and forth depending on your mood and how you're displaying Leech. 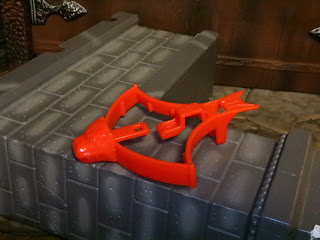 * I've never been a fan of the classic Horde crossbows (I loved the redesigns for the NECA Stactions and Masters of the Universe Classics) but considering this line is all about paying tribute to the vintage stuff, I'm not going to dock it for being kind of a lame accessory. It's quite accurate to the vintage accessory but the plastic is brighter, matching the color aesthetic of Origins. 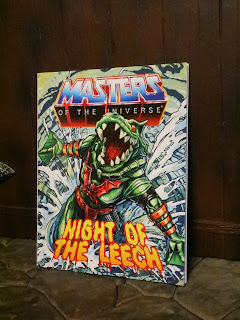 * The Origins figures all come with some pretty cool minicomics and Leech and Snout Spout share Night of the Leech, a story involving this slimy scoundrel. 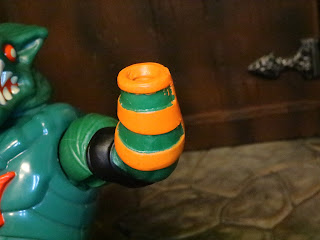 * My only complaint with the figure is that the orange on Leech's bracers is a bit messy. You can see where flecks of orange paint spattered onto the green plastic. 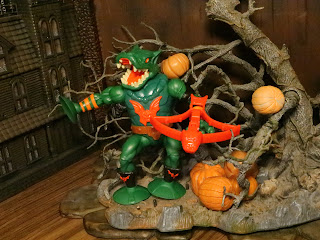 I really think that Mattel crams a lot of cool stuff into these deluxe release as they're noticeably superior to the basic figures in terms of the extras like multiple portraits, hands, and accessories. Leech doesn't have as many weapons as some of the deluxe figures but his two interchangeable portraits and the extra suction cupped hands really give you some options. He's also just a larger, more unusual figure, and his presence in the line is very welcome. Leech gets an Epic rating from me. He's a key member of the Evil Horde and Mattel definitely did him justice here.

Leech hasn't gotten much toy attention lately. The only other Leech toys I've reviewed are the Funko POP! Leech #89 and the M.U.S.C.L.E. slime colored Leech.