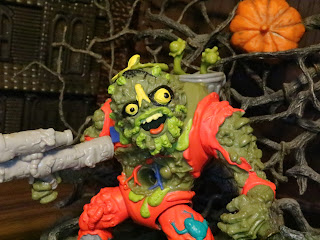 I always have a lot of fun incorporating both the newest goodies and old favorites into 31 Days of Toy Terror. Sometimes it's fun to stray outside of your typical "horror" toys and check out something a bit different. Today's installment is the duo of Muckman & Joe Eyeball from Playmates' vintage Teenage Mutant Ninja Turtles line. The packaging for this pair refers to them as "The garbage-gathering ghoul and his parasitic pal," both things which seem like descriptions of toys suitable for the Halloween season. Muckman is a former sewer worked who has been mutated into a living heap of ooze and various pieces of trash and debris. He's one heck of a figure and features one of the most detailed sculpts of any figure from the vintage TMNT toyline. Ready for a look at Muckman & Joe Eyeball? Then join me after the break... 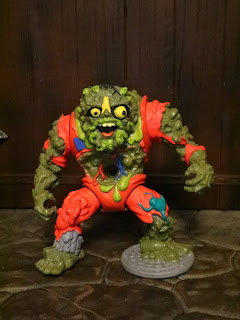 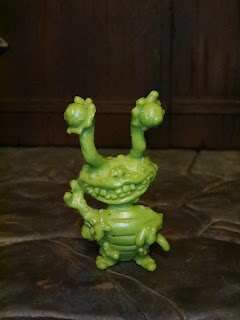 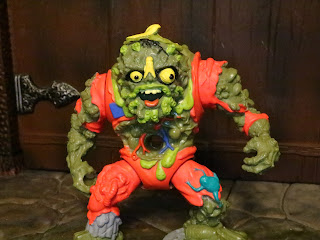 * Muckman is an impressive looking figure. He's a really weird looking figure and, as a pile of living ooze and random debris, he's sculpted with all kinds of crazy stuff on him. Insects, old food, drippings of mysterious substances, litter; he's a nasty looking guy. While everything isn't painted, there are quit a few painted details on this guy that really make him stand out. 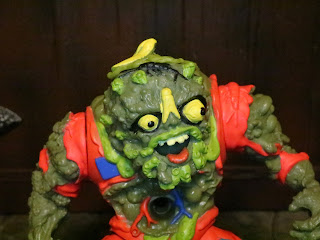 * The headsculpt is awesome. Muckman's eyeballs are crazy and bulging. He's filled with personality. So much, in fact, that he wears a clothespin on his nose, which the bio card informs us is to keep all the junk in his body. He's got a banana peel on top of his head instead of a hat, too. What won't this guy think of next? 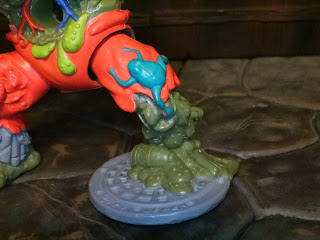 * Muchman's left leg is oozing through a sewer grate. Or is the sewer grate now attached to him permanently as a foot? There's also an old bottle or something attached to his foot and a blue frog crawling up his leg. Seriously, this sculpt is really impressive. 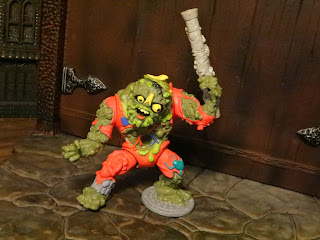 * Muckman's articulation is similar to most other TMNT figures from the era: Balljointed hips with swivel shoulders and a swivel joint on one elbow and one forearm. You're not getting any fine poses out of him but he's durable, fun to mess around with, and can hold his cannon weapon well in either hand. 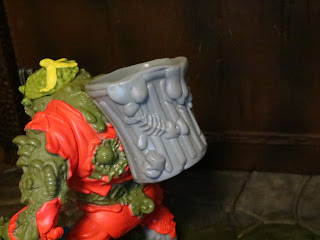 * Muckman's first accessory is his Muck Pack. It's a trash can that plugs into the hole in his pack and provides him plenty of storage opportunities. I like the ooze and other junk sculpted on the side, as if the fishbones and empty cans are tumbling out while he's walking around. 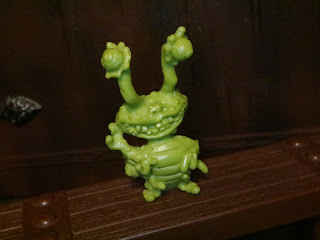 * Joe Eyeball is Muckman's little companion and he's included in the set. He's just a simple, unpainted minifigure, but he's pretty cool looking. He's got some really weird teeth even though his grin is quite endearing. I'm also loving those tall eyestalks. He's kind of like a little spy companion for Muckman. 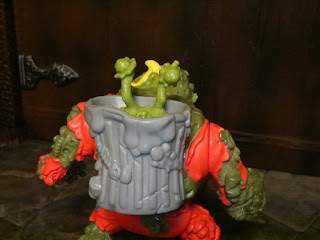 * Need someone to watch Muckman's back? Just pop Joe Eyeball in Muck Pack and he can keep an eye on Muckman's 6. 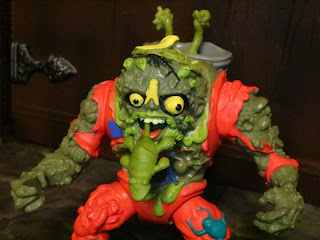 * Muckman actually has something of an action feature: You can place ooze in his mouth or in his backpack and it will drip out of holes in his body. For his mouth to drip ooze, you remove the top of his head and pour a bit of ooze inside. I didn't have any slime or ooze at hand so I placed those little frog guys from the Episode I Jabba the Hutt figure in the whole in his mouth. Hopefully that gives you an idea of what Muckman is capable of. Take note: The figure didn't come packaged with any ooze; you had to buy it separately. 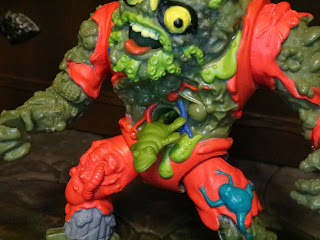 * To see slime pour out of the hole in his stomach you just fill his backpack with ooze. Believe me, the ooze will come pouring out like rain. It's pretty nasty in an oh so cool kind of way. Make it rain, Muckman! 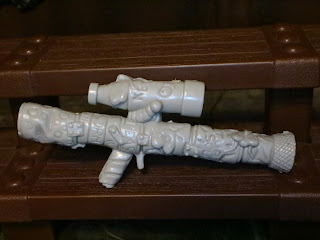 * Muchman's last piece of equipment is his dreaded muck gun. It's a hollow barreled weapon made of various cannisters with a scope on top. The canisters are legible and, if you want, you could stick something like one of the plungers from the TMNT accessory packs in the barrel. That's what I used to do with mine as a kid. 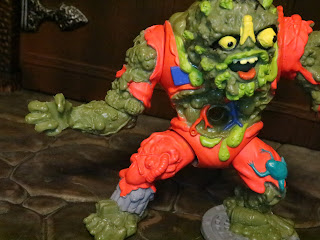 * The only negative I could mention is that Muckman has lots of unpainted details on him. The detail is insane on this guy, though, especially for a toy from 1990, so it's not that big of a deal. Just something to point out. 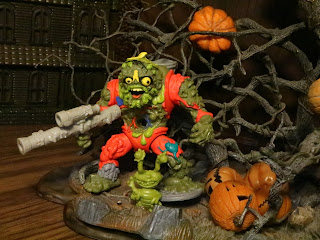 Muckman (along with Joe Eyeball) is one of the most impressive vintage Teenage Mutant Ninja Turtles figures. Seriously, I'd be curious to find another action figure from 1990 or prior with more sculpted detail on it. His accessories are quite cool and very fitting for him and Joe Eyeball is an excellent inclusion. I always loved the little sidekicks. He's an Epic figure and, if you're a fan of Muckman and Joe Eyeball, NECA and Super7 have released really radical looking modern versions of the pair. Hooray for new versions of old toys!


These are the first figures of Muckman & Joe Eyeball that I've reviewed. For more vintage Playmates Teenage Mutant Ninja Turtles reviews check out the following:
Leatherhead