31 Days of Toy Terror X: Kobra Khan from Masters of the Universe Classics by Mattel 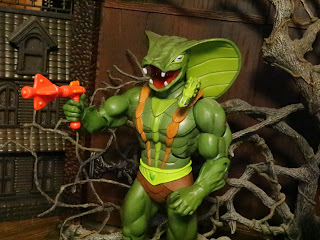 There were four Masters of the Universe Classics figures during the first year of 31 Days of Toy Terror (way back in 2013) so it only seems right to include one for this year. Today I'm checking out something that really freaks me out: A snake! I hate snakes probably even more than Indiana Jones, but I've always liked the Snake Men. Weird, huh? Kobra Khan initially started as one of the Evil Warriors but he soon became part of the Snake Men faction (this was the basis for the Snake Men storyline in Mike Young Productions series). Next year the Snake Men are going to invade the Masters of the Universe Origins line but right now we're taking a look 10 years back to the MOTUC Kobra Khan. Kobra Khan was the March 2012 release on MattyCollector.com (the mention of which might send a shiver down the spine of those of you who remember those days!). Kobra Khan is a well loved villain and the Four Horsemen and Mattel did him justice. Let's take a look at Kobra Khan after the break... 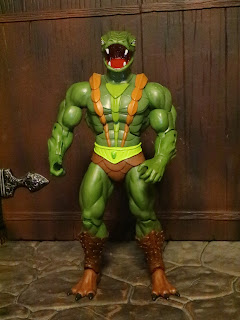 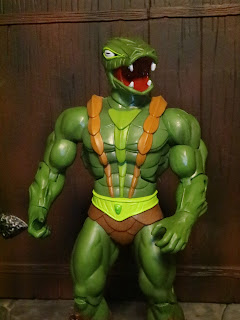 * Kobra Khan really stood out at the time because he had so many unique parts. Besides his head he also had a fully unique torso, waist piece, and some new shins to give him some crazy looking boots. While the articulation on MOTUC might seem quaint by today's standards, the sculpts are still excellent. They still just look amazing with neat, clean sculpting and bold, colorful paintwork. Khan has a really cool torso and trunks covered with unique, reptilian features. That green color scheme with the different shades of green and brown just really does it for me. He's an incredible looking figure. 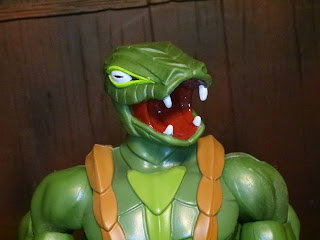 * Kobra Khan comes packaged with two different portraits you can swap out. The first, and probably default, portrait is a standard head similar to what we saw in the vintage line. There's no action feature here (something that even the 200x figure had) so the sculpted detail is greatly improved. He's just so darn freaky looking with those slender, snaky eyes and the four fangs surrounding his mouth. 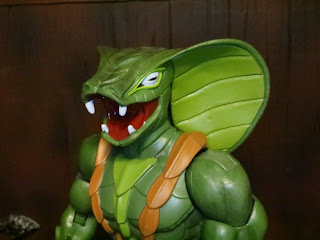 * The second portrait shows Kobra Khan with his hood up, like when he's getting ready to spray venom, sleeping mist, or acid. The hood is quite large and menacing and really changes up the silhouette of the figure drastically. I love how freak it looks on him! 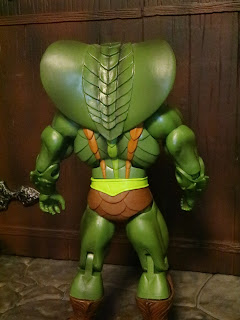 * Flip Kobra Khan around and you can see that the sculpted detail and paintwork is continued on the back. No shortcuts here! The subtle paintwork on the back of the hood, along wit the scales, really makes my skin crawl. 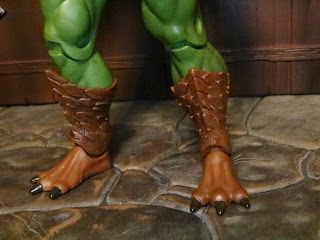 * At the time of his release these shin pieces were new and really gave Kobra Khan some cool looking boots. I assume these are boots, right? I wouldn't think that his feet would look like this. The detail is excellent here with a very cool reptilian texture. 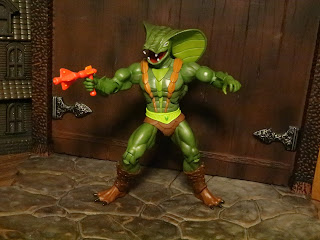 * When they came out Masters of the Universe Classics had one of my favorite articulation schemes. While they're definitely more limited in their range of motion than more recent lines, they're still solid, well articulated figures. They're durable, fun to mess around with, and the articulation really flows with the sculpt. 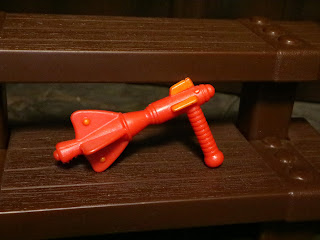 * While the vintage Kobra Khan shared a pistol sculpt with Zodac, the MOTUC version has a more unique pistol. It's still a very vintage sci-fi looking blaster with a flared barrel but it is a new sculpt complete with some orange paint details. 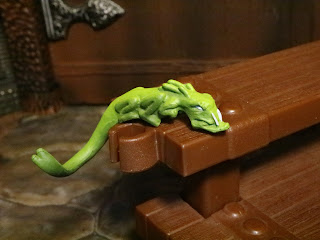 * Kobra Khan also comes with a little lizard companion who has been referred to as both "Fang" and "Pixel." He's a cool little fellow with a big jaw and a long tail. He's designed to sit on Kobra Khan's left shoulder and he looks great perched there. 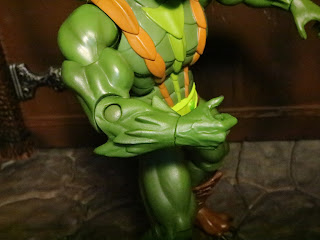 * My only real complaint with this figure is that the elbows really have a very limited range of motion. The lower arm and upper arm just don't seem to work together as smoothly as they should. 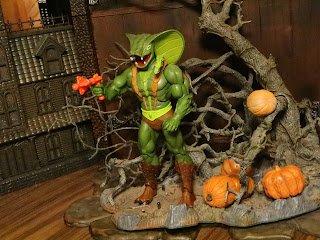