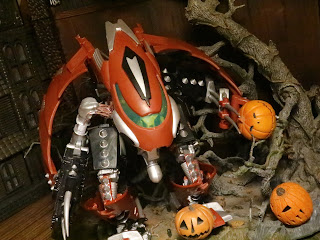 For today's installment of 31 Days of Toy Terror X we're taking a look to the past at a futuristic Spawn: 1995's Future Spawn. Future Spawn came out at the very end of 1995 as a "Special Edition" figure packaged in an oversized window box and is usually lumped in as part of Series 3, though he shipped separately. So... who (or what) exactly is Future Spawn, the mysterious character who is part machine, part human, and all Spawn? Well, the packaging states: "Just as Spawns have existed in the past, this Spawn exists sometime in the distant future. As his enemies have evolved over the centuries, so has Spawn and his hardware. Having no arms or legs, Spawn's costume has replaced the void with cybernetics versions of his limbs. Even his main cannon is cybernetically fused through his chest, making him a walking arsenal."

So, apparently this is Spawn from the future who has been cybernetically modified but is it Al Simmons as Spawn or another Spawn we don't know about? Your guess is as good as mine. It's definitely a Spawn, though, and he's a great mixture of a terrifying machine and a grotesque living corpse. The packaging blurb clearly seems to be a play on RoboCop and the overall figure looks a little like ED-209.; surely that's not a coincidence, right? Let's explore things further and see what lies underneath that dome after the break... 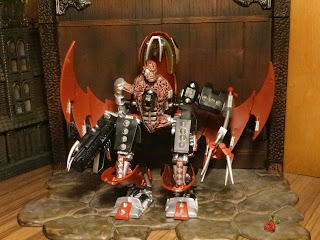 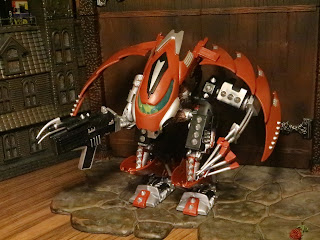 * Future Spawn is a pretty large figure. He's around 7 inches, depending on how you have him displayed, but his footprint is pretty decent. He's a bulky mech with lots of sharp, jagged edges and colors and design elements reminiscent of Spawn's costume. 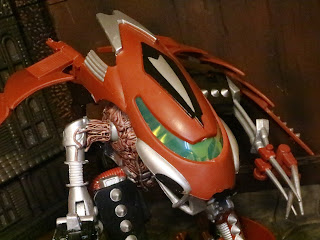 * The true face of Future Spawn lies underneath a massive dome inspired by mech vehicles. I love the green visor which brings to mind Spawn's green, necroplasm fueled eyes. 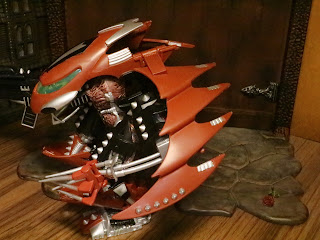 * While Future Spawn doesn't have a cape, he does have some sharp looking wing-like protrusions that cover the sides of the figure. It sort of reminds me of the wings of the Batwing. Do you think he can fly with these? They're hinged, so they can move up and down which changes the look of the figure. 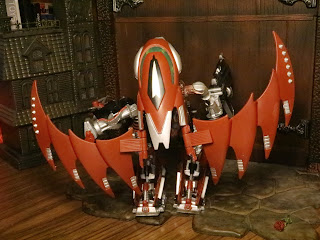 * The dome is hinged and can lift so that it sits behind Spawn's back, looking more like a cape. There's a lot of versatility in displaying the figure as it overall just has a really unique and bizarre articulation scheme. 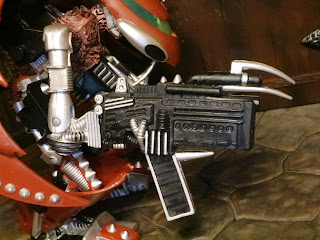 * Future Spawn's right arm has been replaced with a cybernetic arm and a massive gun. Seriously, it's huge! There's a very large magazine on the bottom so who knows what the heck kind of ammunition this thing fires. There's plenty of greebles on the gun, too; things like wires, ventilation ports, and some random spikes on top. 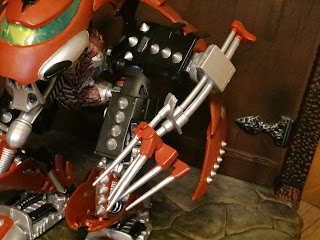 * While the right arm is a heavy firearm, the left arm is a clawed hand that slides in and out at the "shoulder" for impaling enemies. The clawed "fingers" are also hinged, so you can open and close them. The shoulder is sporting an armored and spiked pane; which definitely looks like something Spawn would wear if he were a giant sentient mech. Which he is here, I guess. So it fits. 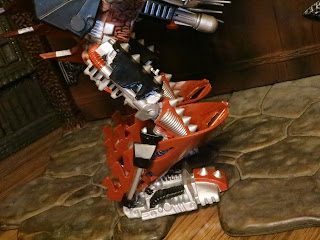 * Future Spawn has some wicked armored legs. They're not asymmetrical, though, but they're still really wicked looking. Lots of spikes, pistons, and some flare on the back that looks kind of like the tatters of the classic Spawn cape. 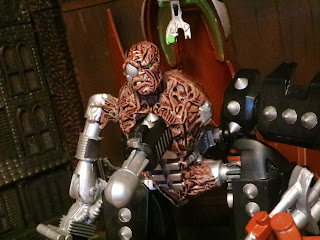 * So.. what does the little bit of organic Spawn left under the dome look like? This here! That's pretty crazy looking, right? He looks all weird and burned, kind of like the movie Burned Spawn, but less wet looking with more detail. It's really weird to see the places where his fleshy body meats the cybernetic parts of his armor. 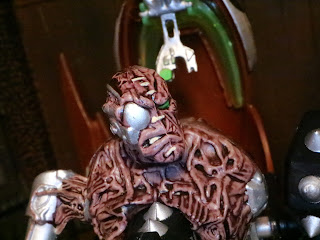 * The headsculpt looks like a standard unmasked Spawn with his face crudely sewn together though he does have some sort of metal device in place of his right eye. 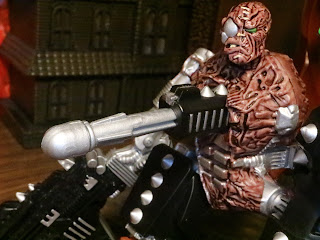 * What else does he have? How about a massive missile launcher in the center of his chest. Press a button on his back (the launcher goes all the way through) and the missile fires with some force out of Future Spawn's chest. That's wild. 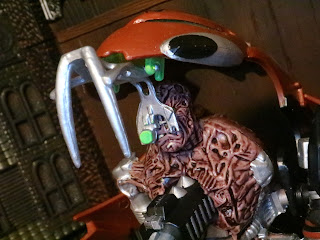 * Underneath the dome is a hinged aiming device or scope of some kind that folds down to cover Future Spawn's face. I presume it's what helps him to guide the launch of the missile. 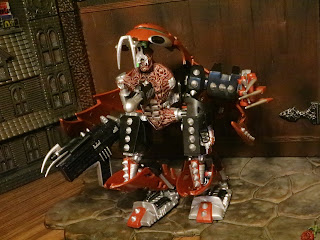 * If you look at the Facts above, there's actually quite a bit of articulation here, including a balljointed right hip and right shoulder. You can definitely move this figure a bit, but...

* There are definitely some weird articulation choices. The balljointed hip is only on one hip (on the right hip) and it ends up being kind of wiggly. 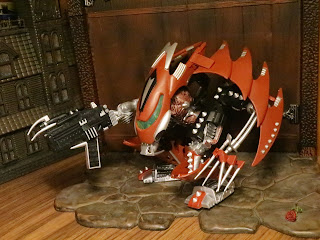 I picked this guy up at Retro Toys & Collectibles in Cherryville, NC back in June and he was actually my first selection for this year's 31 Days of Toy Terror. He's a crazy cool figure with a really weird, unique design. I kind of remember seeing him on shelves back in the day but I only paid cursory attention to Spawn on and off through the mid-late 1990s. This is an Epic figure with just so much wonderful weirdness, the type of toy we don't see that much anymore. Mix together Spawn, a mech, ED-209, EXO-Squad, and.. I have no idea, zombies? This is what you get. Cool and and creepy.