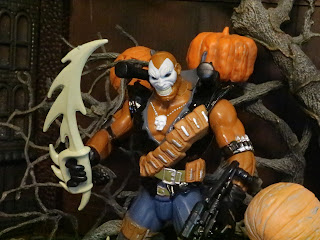 McFarlane Toys was a great source of horror toys throughout the later half of the 1990s and throughout the 2000s, and not just for figures of Spawn. Take Chapel here, for example. Chapel was created by Rob Liefeld for Youngblood but was introduced into Spawn early on as the person who Jason Wynn ordered to kill Al Simmons. That was later retconned, though, and Chapel disappeared from the Spawn series. He did get an action figure in series 2 of the Spawn line, though, along with Badrock (a handful of other characters were released in the single series of Youngblood figures, also by McFarlane Toys). I've had this figure for years and now that Spawn is all of the rage again it seems like the perfect time to review him. Chapel is a grim professional warrior with a spooky, skull-faced visage. I think he fits the 31 Days of Toy Terror theme perfectly. Let's check him out after the break... 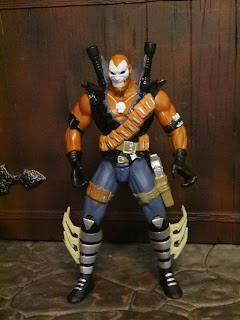 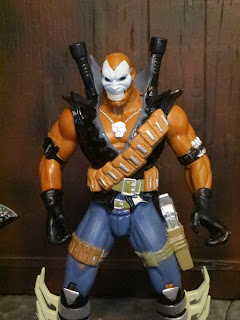 The Positives:
* Chapel was released earlier in the Spawn line so he's definitely not crazy realistic like some of the later figures would be. He's very comic inspired, though, and decked out in an outfit that shows him ready for combat. A leather vest (or maybe a sleeveless leather jacket), at least a dozen pouches filled with all kinds of goodies, and ammunition and various weapons strapped on his limbs and belt. 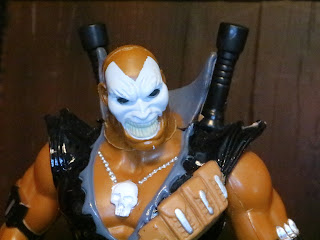 * Chapel has a pretty extreme expression on his face and is showing a lot of teeth. He looks pretty pissed about something. Maybe he's mad that he didn't make it into the Spawn movie? * Chapel has an interesting feature: Two cannons on his back that are hinged and fold up to provide some extra shoulder mounted firepower. I've always kind of liked this feature. It's fun and definitely seems fitting for someone with Chapel's particular skillset. 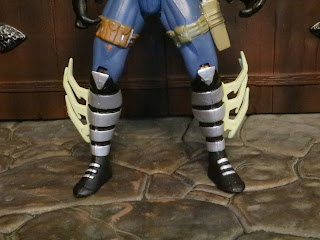 * Not only are his boots cool but he has some crazy blades on them that kind of remind me of the knife he carries. There's some real synergy there. 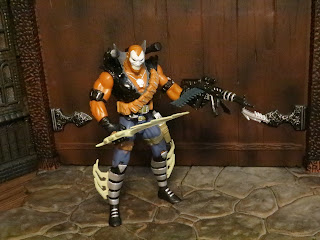 * Since he's from 1995, Chapel has a very classic articulation scheme (you know, the standard five points) with a few little extras like hinged knees, a swivel right wrist and a swiveling bicep on his left arm. He's fun, durable, and has enough articulation to get some basic poses out of him. 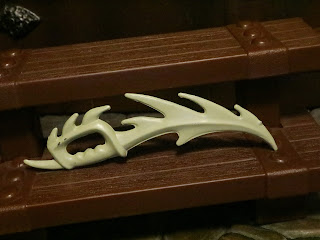 * Chapel's knife is very nasty looking. Maybe it's the color but it kin of looks like it's made out of bone or something. There are blades and spikes on the handle and all over the blade. Impractical? Absolutely. Lethal? Definitely. 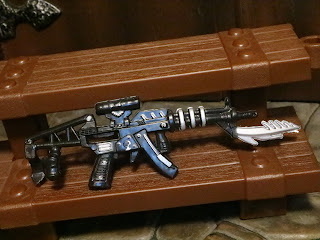 * Chapel also comes with a semi-realistic looking assault rifle. There's a tactical stock with cuffs that fit over the sides of his left arm, a scope, lots of detail, and a small bayonet. There's a banana magazine on this but there's a feedway as well. Yeah, that's practically impractical on a real firearm but here I guess it works. Spawn guns are always absolutely crazy. 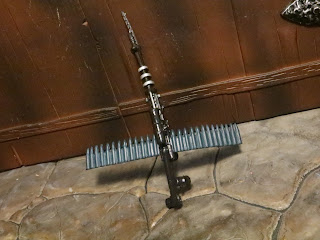 * A belt of ammunition is included which can fit into the feedway. The package implies that the gun makes a "bullet shooting sound" but the best you're getting is that the ammunition belt kind of makes a squeak when you pull it through the feedway. Not really an action feature to brag about but the presence of the ammo belt is kind of cool. 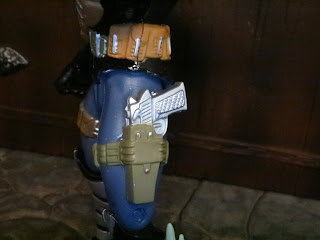 * Chapel also carries a pretty powerful looking pistol in the holster on his left hip.

The Negatives:
* Unfortunately, it's not removable. Other figures in this same series had functional holsters so why didn't Chapel get one? 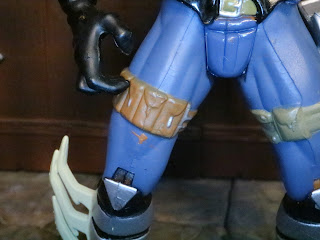 * There's some sloppy paint on my Chapel. Well, either that or he's a sloppy eater and spilled some chili on his trousers. Oops! 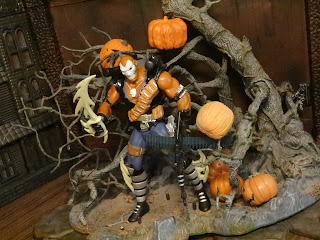 Chapel is a pretty cool figure. I have a lot of Spawn figures on the countdown this year and but Chapel seemed like a good fit for the season, particularly due to the crazy skull-inspired face paint he's sporting. He's a Great figure with some cool weapons and a neat design. While it's doubtful he'll show back up in the pages of Spawn or as a new action figure (Rob Liefeld doesn't even own the Youngblood characters anymore), who knows at this point? We're definitely living in a Spawn renaissance and I don't ever want to say no to any possibility.