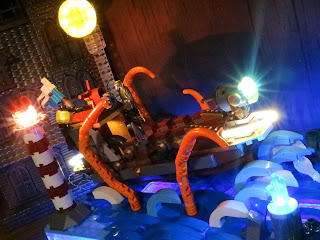 Today for 31 Days of Toy Terror I've got something extra special for you! A review of an LED light up brick set featuring a raging ocean, a full moon, and a terrifying, tentacled sea monster! A few months ago Funwhole reached out to me and offered to send me this set if I'd review it and, of course, I gladly obliged. Funwhole's concept is based on the use of lots of LED bricks and wiring so that your sets look great whether it's day or night, and I think they've definitely succeeded in crafting some rather interesting sets. Today I'm checking out the Ocean Adventure Ship from the Fantasy Series, a buildable brick set focusing on a ship facing the perils of the ocean and what lurks beneath. This review is kind of different from most of my other ones as I actually did a video review supplement with Adora, AKA Umbreon13, who really wanted to help. I hope this video and review help to put you in a spooky mood for the Halloween season. The video is attached below while the written review is after the page break. Enjoy!

In the video I show off the manual, the box, and the tools that come with this set. I also try to explain the wiring process as well. The production quality on everything included here is really nice, especially the inclusion of the metal tweezers used to help with the wiring and fitting the connections. The brick quality is great as well. I didn't have any missing pieces nor were any pieces deformed. 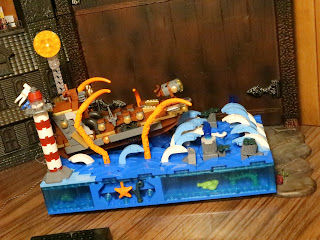 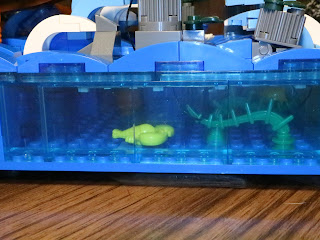 The Build:
* I love stuff that has a diorama like quality to it and the Funwhole Ocean Adventure set definitely qualifies. Even below the ocean's surface there's a lot going on. You start by assembling the sea floor, a cool, fish tank styled world of fish, crustaceans, and seaweed. I loved building this part as there are lots of interesting pieces. 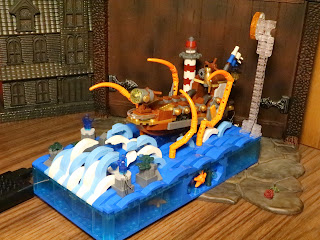 * Here's the completed set! Most of the set is one solid piece after built but the ship is easily removable. There's a story in the instruction manual that tells the story of the set, but it's also a great set for just looking at and letting your imagination run wild. I think it would be really fun to use this as a nightlight. It's quite a dense set when built, definitely larger and heavier than I expected. 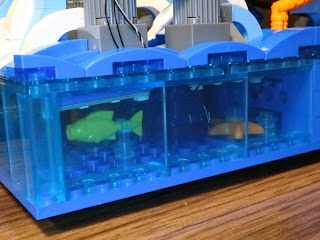 * Once built it is tough to truly admire all of the creatures under the ocean. There are fish, starfish, lobsters, seaweed, and coral just hanging out under there. If the top would have been a removable plate, like the Lego modular buildings, that would have been a rather nice feature. I imagine it would mess with the wiring, though. 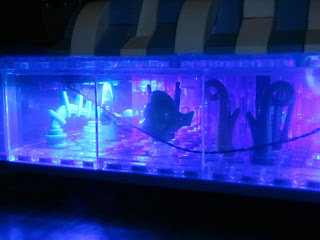 * Once the set is lit up you definitely get a better view of the world under the sea. Sit around, pretend you're Jacques Cousteau, and gaze at the sea life lit up by the little LEDs embedded in the set. 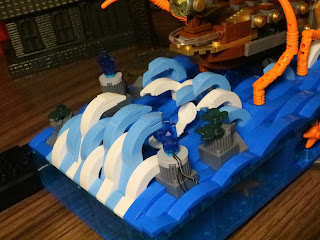 * Above the water are waves. Lots of them. The thought of stirring water and sea monsters or creatures underneath freaks me out, so this set might spook me a bit more than it does you. The waves are cleverly created through a mass of have arches of blue and white. They're a pain to build (you need some nimble fingers) but the effect is pretty convincing when completed. 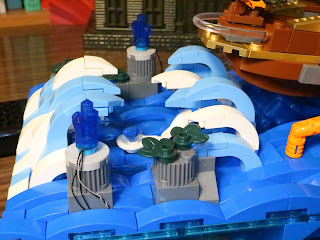 * Between the waves there are a few cool details like the gems on top of the rocks, some plants growing on another rock, and a white clamshell with a blue jewel inside. 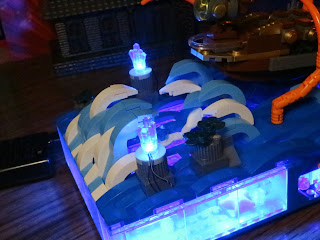 * When you flick the lights on the jewels look really cool, giving off a gorgeous blue glow. 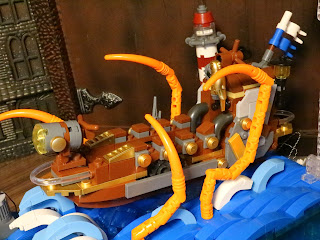 * Here's a look at the ship and the giant squid tentacles sticking out of the ocean. The ship is a pretty fun build with lots of details. It's not really built with figures in mind, so there aren't too many places where you could place one. The scale would be kind of odd, too. I love the front of the ship with the searchlight that moves a bit. The front railing also glows, but it can be swapped out with a standard railing piece for daytime display. 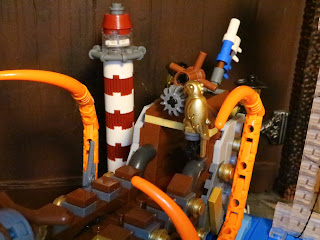 * Here's a closeup of the ship where you can see the helmet and a golden parrot who lives onboard he ship. 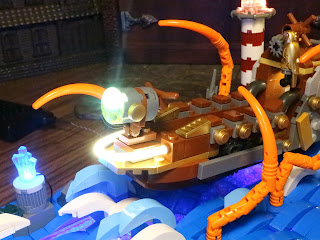 * Here's another look at the front, this time with the searchlight and the front railing lit up. 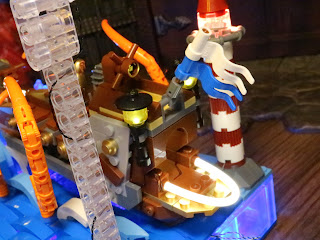 * Here's the stern, where you can see the rear railing and the lanterns all lit up. There are some flags hanging over the lower deck, which looks like it leads into a small cabin under the helm. 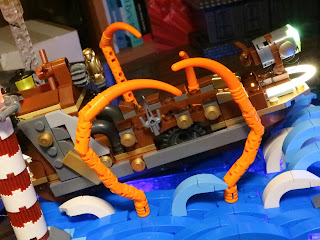 * There's actually a knob on the side that causes the tentacles to shake around. The tentacles are articulated with lots of swivels and hinges, so they move nicely and can be posed in multiple ways. The action from them is neat, as they move up and down and shake, but a bit underwhelming considering what I was hoping for. Still, it's all brick built, so that's a big deal. 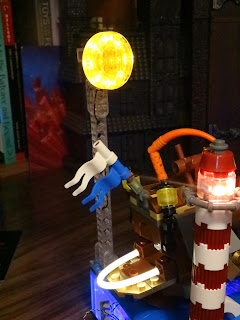 * At first I didn't realize what this was supposed to be (I thought it was some kind of beacon) but my wife and daughter pointed out that this is the moon. It's a yellow disc that lights up and it's mounted on a clear stand. Now that I see it, I really like the effect. The scale is all over the place with this set but then, considering it's more of a diorama and a display piece, I really like the idea of trying to create scale in a set of this size. 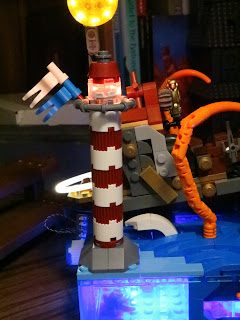 * On the other side is what might be a lighthouse or a buoy. It's smaller than the ship so, again, it's clearly meant to be viewed as being a bit more distant or it's some kind of light up buoy. It actually flickers, which is really cool. I love lighthouses, so if it is one, I'm a fan. 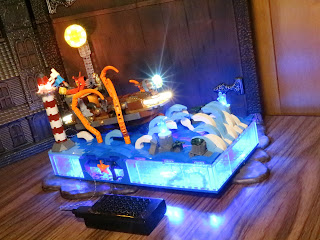 Both me and my daughter have certainly had Lego sets with an LED light or two but this set is something else. Again, I really recommend that you give the video a watch as I tried to go through and talk about the construction and wiring of this unique set. I do have some gripes, mostly wishing that some of the bricks had channels for the wiring built in and that the directions were a bit clearer in spots, but overall I really like the theme and the design. This is an impressive piece that ought to attract any guests viewing your collection. The Ocean Adventure Ship is a challenging build due to the wiring but if you've built a few larger building brick sets before you should be fine.