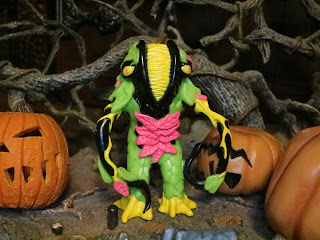 I try to review at least one Trash Bag Bunch figure a year and the Halloween season is always a good opportunity to check out one of the monstrous Trashors from this line. Today I'm checking out Liceplant, another one of my childhood Trash Bag Bunch figures who I actually watched appear from a magical, alien trash bag in the sink in my bathroom. I've always loved this guy but while taking pictures of him for this review I finally realized that the weird yellow pattern on his head isn't just some part of his fibrous plant body; those are his teeth! His mouth opens from the top, like a Venus fly trap if it were like 15 times more metal. How freaking cool! I can't believe I never saw that as a kid during the untold hours I spent playing with these guys. Let's take a look at the freak nasty Liceplant after the break... 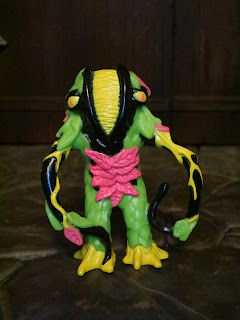 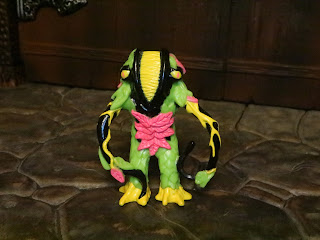 * Liceplant is a decent sized minifigure and is really nicely painted. I love that color scheme of green, black, yellow, and pink. He absolutely plays into all of the 1990s tropes like neon colors, being a mutant, and having an environmental theme, but he just does it so well. I also dig the patch of pink leaves on his midsection. What are those? Some toxic plant? A protective covering? Is it covering his junk? 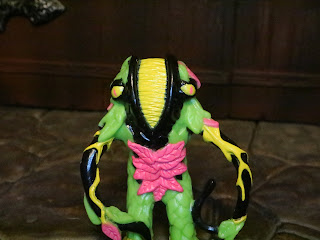 * Here's a close up shot of Liceplant's creepy eyes and the teeth that split his upper body down the middle. Those are totally teeth and, again, I've been missing that detail for 31 years. 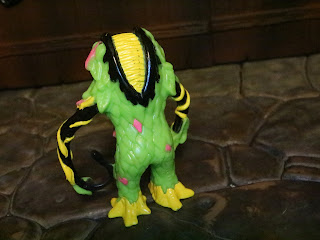 * The back of Liceplant is covered with lots of sculpted leaves. That's a pretty slick detail for a 2 1/8th inch minifigure sold blind bagged in a disposable trash bag. The random pink leaves are a nice touch, too. 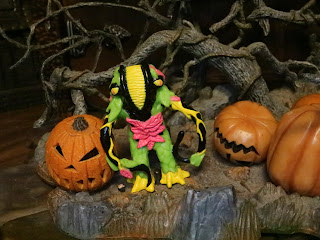 Environmentally conscious toylines were all the rage in the early 1990s: G.I. Joe Eco Force, Toxic Crusaders, Zen the Intergalactic Ninja, Captain Planet, and, yes, Trash Bag Bunch. This line produced some of the greatest minifigures of all time, however, and Liceplant is one of the best. This guy is seriously Epic and is one of the best in the entire toyline. Recently, Last Resort Toys has released XL versions of some of the Trash Bag Bunch figures, including Liceplant, but I long for the day when we get new minis scaled with the originals. The Trash Bag Bunch holds a special place in my heart and they'll always have a spot in 31 Days of Toy Terror.
This is the first figure of Liceplant I've reviewed. For more Trash Bag Bunch reviews check out the following:
Bio-Degrador
Dr. Sheen
Fuminoid
Garbeast
Incinerator
Junker
Junk Jackal
Klutch
Plutor
Prof. Garboff
Skuzbeast
Sewerbat
Sewerot
Stink Buzzard
Trashblaster
Trasher
Vac-U-Ator
Wastor
White Washer
Posted by Barbecue17 at 10/25/2022